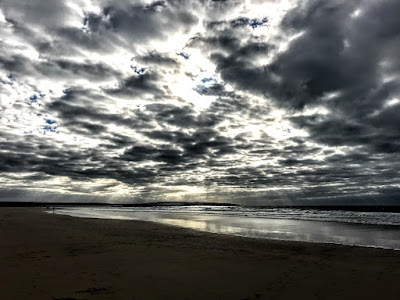 ‘You have set your glory above the heavens’ (Psalm 8: 1) … on the beach in Ballybunion, Co Kerry (Photograph: Patrick Comerford)

Lent began this week on Ash Wednesday (2 March 2022). Before today begins, I am taking some time early this morning for prayer, reflection and reading.

Psalm 7 is also known by its opening words in Latin, Domine Deus meus in te speravi.

The superscription reads, ‘A Shiggaion of David, which he sang to the Lord concerning Cush, a Benjaminite. The Hebrew word shiggayon is of unknown meaning, although it may indicate an emotional song.

Psalm 7 is traditionally assigned to King David. The message in the psalm is that the righteous may seem weak, but ultimately will prevail against the wicked.

Psalm 7 is one of the Lamentations of an individual. A possible outline the psalm is:

Psalm 8 provides a picture in which God is praised for his glory (verses 1a and 9), reflected in his creation. God fashions creation, and is greater than all creation.

Once again, we have images of infants and children (verse 2). God is also a craftsman (compare ‘the work of your fingers’ in verse 4 with the master craftsman or worker in Proverbs 8: 30).

This psalm recalls the first creation story. God has given us a share in his power by conferring on us authority over the rest of all that he has created.

In Psalm 9, we are reminded that God hears the cry of the poor and promises justice for the oppressed and those in trouble.

Psalm 9 is known in earlier editions of the Book of Common Prayer by its opening words in Latin, Confitebor tibi, ‘I will give thanks to you, Lord.’ This psalm is a reminder that the success of evil is only temporary, and in the end, the righteous will endure.

Psalm 10 is considered part of Psalm 9 in the Greek Septuagint and in most pre-Reformation Bibles. These two consecutive psalms have the form of a single acrostic Hebrew poem. The Psalm is an acrostic Hebrew poem, and with Psalm 10 forms a single combined work. This is the first of the acrostic Psalms, covering half of the Hebrew alphabet, with Psalm 10 covering the rest of the alphabet.

There is some tension between psalms 9 and 10. Psalm 9 expresses thanksgiving; Psalm 10 laments that deviants from God’s ways, who hold God in contempt, pursue those devoted to God.

Psalm 9 has a tone of victory over evil and its ancient Chaldean title suggests that it was written to celebrate David’s victory over Goliath. Then, as the acrostic continues into Psalm 10, the tone becomes a lament: God seemingly stands afar off. Victory over evil may be ‘here and not yet.’

In Psalm 9, we are told that those who know God (verse 10) will trust in him, for he is faithful to those who seek him. God is the avenger of blood (verse 12) and will remember the pleas of those hurt by the wicked.

God is asked to show his mercy, and to save the petitioner from the ‘gates of death’ (verse 13), so that he may praise God in the Temple (verse 14).

Verses 15-18 express his renewed confidence: others may fall into a trap of their own making, but God is just. God will remember the needy and give hope to the poor, while the nations shall be judged for their oppression.

A Shiggaion of David, which he sang to the Lord concerning Cush, a Benjaminite.

1 O Lord my God, in you I take refuge;
save me from all my pursuers, and deliver me,
2 or like a lion they will tear me apart;
they will drag me away, with no one to rescue.

3 O Lord my God, if I have done this,
if there is wrong in my hands,
4 if I have repaid my ally with harm
or plundered my foe without cause,
5 then let the enemy pursue and overtake me,
trample my life to the ground,
and lay my soul in the dust.
Selah

6 Rise up, O Lord, in your anger;
lift yourself up against the fury of my enemies;
awake, O my God; you have appointed a judgement.
7 Let the assembly of the peoples be gathered around you,
and over it take your seat on high.
8 The Lord judges the peoples;
judge me, O Lord, according to my righteousness
and according to the integrity that is in me.

9 O let the evil of the wicked come to an end,
but establish the righteous,
you who test the minds and hearts,
O righteous God.
10 God is my shield,
who saves the upright in heart.
11 God is a righteous judge,
and a God who has indignation every day.

12 If one does not repent, God will whet his sword;
he has bent and strung his bow;
13 he has prepared his deadly weapons,
making his arrows fiery shafts.
14 See how they conceive evil,
and are pregnant with mischief,
and bring forth lies.
15 They make a pit, digging it out,
and fall into the hole that they have made.
16 Their mischief returns upon their own heads,
and on their own heads their violence descends.

17 I will give to the Lord the thanks due to his righteousness,
and sing praise to the name of the Lord, the Most High.

To the leader: according to The Gittith. A Psalm of David.

1 O Lord, our Sovereign,
how majestic is your name in all the earth!

You have set your glory above the heavens.
2 Out of the mouths of babes and infants
you have founded a bulwark because of your foes, br /> to silence the enemy and the avenger.

3 When I look at your heavens, the work of your fingers,
the moon and the stars that you have established;
4 what are human beings that you are mindful of them,
mortals that you care for them?

5 Yet you have made them a little lower than God,
and crowned them with glory and honour.
6 You have given them dominion over the works of your hands;
you have put all things under their feet,
7 all sheep and oxen,
and also the beasts of the field,
8 the birds of the air, and the fish of the sea,
whatever passes along the paths of the seas.

9 O Lord, our Sovereign,
how majestic is your name in all the earth!

To the leader: according to Muth-labben. A Psalm of David.

1 I will give thanks to the Lord with my whole heart;
I will tell of all your wonderful deeds.
2 I will be glad and exult in you;
I will sing praise to your name, O Most High.

3 When my enemies turned back,
they stumbled and perished before you.
4 For you have maintained my just cause;
you have sat on the throne giving righteous judgement.

5 You have rebuked the nations, you have destroyed the wicked;
you have blotted out their name for ever and ever.
6 The enemies have vanished in everlasting ruins;
their cities you have rooted out;
the very memory of them has perished.

7 But the Lord sits enthroned for ever,
he has established his throne for judgement.
8 He judges the world with righteousness;
he judges the peoples with equity.

9 The Lord is a stronghold for the oppressed,
a stronghold in times of trouble.
10 And those who know your name put their trust in you,
for you, O Lord, have not forsaken those who seek you.

11 Sing praises to the Lord, who dwells in Zion.
Declare his deeds among the peoples.
12 For he who avenges blood is mindful of them;
he does not forget the cry of the afflicted.

13 Be gracious to me, O Lord.
See what I suffer from those who hate me;
you are the one who lifts me up from the gates of death,
14 so that I may recount all your praises,
and, in the gates of daughter Zion,
rejoice in your deliverance.

15 The nations have sunk in the pit that they made;
in the net that they hid has their own foot been caught.
16 The Lord has made himself known, he has executed judgement;
the wicked are snared in the work of their own hands.
Higgaion. Selah

17 The wicked shall depart to Sheol,
all the nations that forget God.

18 For the needy shall not always be forgotten,
nor the hope of the poor perish for ever.

The Prayer in the USPG Prayer Diary today (4 March 2022) invites us to pray: 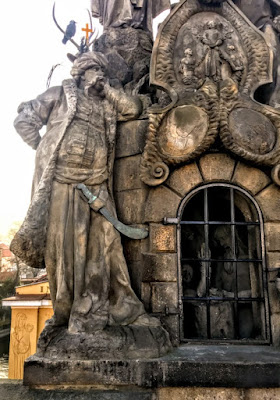 ‘He does not forget the cry of the afflicted’ (Psalm 9: 12) … Christian prisoners in an Ottoman jail depicted in a sculpture on the Charles Bridge in Prague (Photograph: Patrick Comerford)