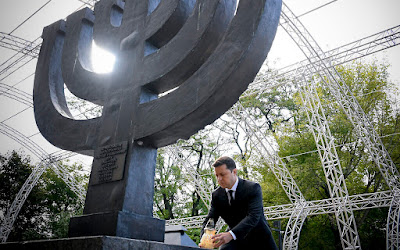 The Russian invasion of Ukraine is in its ninth day, and the country’s entire population is in danger, including the 350,000 Jews who call Ukraine home, and who are in my prayers this Friday evening.

In statements misappropriating the Holocaust and belittling the sufferings of Jewish people in Ukraine, Vladimir Putin claimed his invasion had a goal to ‘denazify’ Ukraine. As the Guardian writer Jason Stanley pointed out last week, this is an outrageous claim by a fascist autocrat who is hailed by the global far right and who jails the leaders of a democratic opposition and human rights campaigners.

He pointed out that President Volodymr Zelensky is Jewish and comes from a family partially wiped out by the Nazis during the Holocaust. During a trip to Jerusalem in 2020, he revealed that three of his great uncles died in the Holocaust during World War II, and his grandfather was the only one of the four brothers to survive.

One of his first actions after winning the election in 2019 was to meet a delegation of the country’s six leading rabbis. Since the Russian invasion, many Jewish commentators have hailed him as a modern-day Maccabee.

But Ukraine has a dark antisemitic past, and during the Holocaust millions of Jews were killed by Nazis with the assistance by local collaborators.

The musical and movie Fiddler on the Roof is set in 1905, when Jews in Ukraine had been the targets of pogroms for almost a century. The storyline and the fictional town of Anatevka are based on Tevye and his Daughters by Solomon Naumovich Rabinovich, better known by his penname, Sholom Aleichem.

He modelled Anatevka on the town of Boyarka, near his birthplace in central Ukraine. When new arrivals are welcomed in the musical, they tend to have travelled from Kyiv, now the Ukrainian capital, and the presence of Russian soldiers always represents impending danger. In recent days, fact has come to imitate fiction.

In recent years, Ukraine has also become home for hundreds of thousands of Jews whose families lived in its towns and cities for centuries and remained there even after the collapse of the Soviet Union in 1991. But for many Jews around the world, Ukraine is a region where millions of Jews were murdered during the Holocaust, or it is the place their grandparents or ancestors fled from in the late 1800s or early 1900s, or an area where there has been wave after wave of pogroms over the centuries.

Violent pogroms in the regions of Volhynia and Podolia, west of Kyiv, had long targeted the Jews of what is now Ukraine, including a violent peasant uprising led by Bogdan Chmielnicki in 1648-1649, when tens of thousands of Jews were massacred. As a direct result of those attacks, the region became the birthplace of the Chassidic movement.

Rabbi Yisrael Baal Shem Tov, the founder of the Chassidic movement, was born in the region in 1698. His teachings and his movement swept through the region, quickly becoming the dominant stream of Jewish life in the area. He died in 1760 and is buried in the town of Mezhibush (Medzhybizh), about 320 km west of Kyiv.

The Baal Shem Tov was succeeded by Rabbi Dovber of Mezritch, who was known as the Maggid. His students spread out throughout East and Central Europe with the message of a loving God and a joyous Judaism. When he died in 1772, the Maggid was buried in the village of Anipoli (Hanopil) in western Ukraine.

The Maggid’s student and the spiritual ‘grandson’ of the Baal Shem Tov, Rabbi Schneur Zalman of Liadi, also known as the Alter Rebbe, was the founder of the Chabad movement. He was buried in the Ukrainian town of Haditch, in what is today the Poltava region east of Kyiv. The graves of these Chassidic masters have attracted many thousands of pilgrims to Ukraine each year.

But the Russian Empire only became home to a large number of Jews with the First Partition of Poland in 1772, when large tracts of Poland were annexed by its neighbours, including Russia. Catherine II established the Pale of Settlement in 1790. Jews were allowed to live in this territory of 1.2 million sq km that included much of present-day Moldova, Belarus and Ukraine.

Jews were not allowed to live east of the regions of Chernigov, Poltava and Yekaterinoslav without a permit. Even within the Pale, Jews could live in certain cities, such as Kyiv and Nikolayev, but only with a special permit. Mendel Beilis became the victim of the infamous blood libel in Kyiv in 1911-1912 because, as the manager of a factory, he was one of the few Jews permitted to live in the area.

During World War I, Jews in Czarist Russia were forced to flee regions close to the frontlines, and the restrictive measures from the 18th century remained in place until the Russian Revolution in 1917.

According to the Soviet census of 1926, 50 per cent of the Soviet Union’s 2.7 million Jews lived in Ukraine, and 87 per cent of them lived in small towns or villages. This situation began to change slowly in the early Soviet period and accelerated in the early 1930s. When forced collectivisation caused increasing hunger, many Jews headed to the cities in search of work and food.

According to the US Holocaust Memorial Museum, before Hitler’s invasion of the Soviet Union in 1941, ‘Ukraine was home to the largest Jewish population in Europe.’ The Chief Rabbi, Rabbi Shmarya Leib Medalia, was arrested and shot by Stalin in 1938. When the Communists were seeking to fill the vacancy in 1943 to appease their Western allies, they briefly considered appointing Rabbi Levi Yitzchak, the leading rabbinical figure in Ukraine, before abandoning the idea. He died in exile in Kazakhstan in 1944.

The Nazis, with the help of local collaborators, gathered Ukraine’s Jews in local ghettos. But, for the most part, instead of deporting them to camps, shot them in forests and fields close to home. Such killing fields are found throughout Ukraine, including Babyn Yar outside Kyiv, where 40,000 Jews were murdered.

Scholars are still researching the scale of the Holocaust in Ukraine, but they estimate at least 1.5 million Jews were killed there.

Many surviving Jews returned home after World War II. Traces of the former Pale of Settlement were still visible in the late 1980s and early 1990s. Small, historically Jewish towns in western Ukraine still had synagogues and significant numbers of native Yiddish speakers, and many older Jews still lived in dozens of smaller Jewish towns.

In recent years, Ukraine has seen the development of a thriving Jewish infrastructure that includes synagogues, mikvahs, a matzah bakery, Jewish schools and yeshivahs, and social services organisations.

The largest Jewish centre in the world is in Dnipro (Dnepropetrovsk), there is a Jewish university in Odessa, and there are kosher restaurants throughout Ukraine. There are Jewish orphanages too in Odessa and Dnipro, and children from the Jewish orphanage in Zhitomir were evacuated farther west this week.

Dnipro is home to the Menorah Centre, at 500,000 sq ft the largest Jewish centre in the world. The centre stands beside the Golden Rose synagogue, and includes the two-storey Holocaust Museum, kosher restaurants, a kosher supermarket, a Judaica shop, a florist and other shops. Here too are hotels, a concert hall, convention halls and offices. The other Jewish facilities in Dnipro include the Beit Baruch old age home and an educational campus.

In a televised meeting with his security council yesterday (3 March), Putin once again described the invasion of Ukraine as a fight against ‘neo-Nazis.’ Yet there is no evidence to suggest widespread support in Ukraine’s government, military or electorate for extreme-right nationalism.

Earlier this week, a Russian missile attack targeted the Holocaust memorial park in Kyiv commemorating the mass murder of Jews at Babyn Yar by the Nazis during World War II.

Thankfully, for the moment, the most iconic memorials at Babyn Yar are unscathed, including a large menorah, a newly-built synagogue and a monument honouring the Soviet citizens and prisoners of war who died during World War II. But a museum building that was not yet in use caught fire, and there was damage across the 140-acre site.

Speaking directly after the missile attack, President Zelensky said it was ‘beyond humanity.’

‘What is the point of saying ‘never again’ for 80 years, if the world stays silent when a bomb drops on the same site of Babyn Yar? At least 5 killed. History repeating …’ he tweeted.