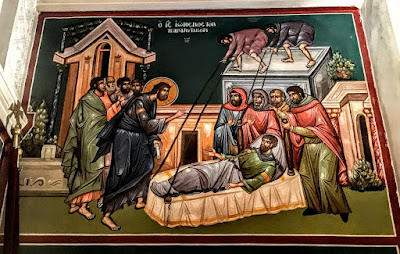 The healing of the paralytic man … a fresco in Analipsi Church in Georgioupoli in Crete (Photograph: Patrick Comerford)

Some years ago, at an event in Saint Martin-in-the-Fields Church, Trafalgar Square, when people were asked to bring along their favourite poems, Charlotte brought Seamus Heaney’s poem ‘Miracle’, from his collection Human Chain (2010).

In these poems, written after his stroke in 2005, Seamus Heaney speaks of suffering and mortality. This poem ‘Miracle’ retells the story of the miraculous healing of the man variously described as a paralytic man and a man with palsy. The story is told in all three synoptic Gospels (Matthew 9: 2-8; Mark 2: 1-22; Luke 5: 17-26), and – like Seamus Heaney, I suppose – my situation makes me wonder whether this man was also suffering after a stroke.

It is interesting how Heaney tells the story of healing and this man from the perspective of the man’s friends. In this way, his poem becomes an expression of gratitude by the poet to all who helped his recovery after his stroke.

Charlotte and I enjoyed the Seamus Heaney exhibition in the Bank of Ireland in Dublin, ‘Seamus Heaney: Listen Now Again’, a few weeks ago (11 March 2022); now, a few weeks later, I can only imagine how she tells of her experience of caring for me during my stroke.

Heaney’s focus is on neither Christ as the healer nor the invalid, but on the friends who helped this sick man to reach Jesus by lowering him through a skylight in the roof. The title of the poem refers to the miracle in the Gospel story, but for the poet the miracle is found in the opening lines:

Not the one who takes up his bed and walks
But the ones who have known him all along
And carry him in.

The friends of this man love him and seek his healing, no matter what it takes for them to do, and so they become the true miracle at this moment. They are there when no one else is, they care for their friend, and they give him the priceless gift of friendship.

When they hear in Capernaum that Jesus is healing the sick, they give their friend one more gift. They carry him to Jesus. And when they cannot get him through the door, they then lower him through the roof. What persistent love they show their friend, like the persistent love of a true friend who calls a taxi, packs all my bags, brings me to the A&E unit, stays with me while I am admitted, transferred to the Emergency unit, and then, late at night, when I am moved to a ward.

their shoulders numb, the ache and stoop deeplocked
In their backs, the stretcher handles
Slippery with sweat.

We are invited to stand with those friends, with the hope and the faith and the love that brings them there, to stand with them on behalf of all who hurt, to feel the burn in their hands from the paid-out rope, the ache in their backs from the burden they have carried, to see the gift of this miracle, this grace, that was all gift, but that required something extra of them.

There are many miracles in this story and many lessons. This poem reminds us how sometimes we need to be carried by our friends, while at other times we are the ones who need to help ‘bear one another’s burdens’ (Galatians 6: 2).

Their shoulders numb, the ache and stoop deeplocked
In their backs, the stretcher handles
Slippery with sweat. And no let up

Until he’s strapped on tight, made tiltable
and raised to the tiled roof, then lowered for healing.
Be mindful of them as they stand and wait

For the burn of the paid out ropes to cool,
Their slight lightheadedness and incredulity
To pass, those who had known him all along.

The magnolia tree in a courtyard in the hospital in Milton Keynes (Photograph: Patrick Comerford, 2022)