Central Methodist Church
on Aldergate in Tamworth
closes after 136 years 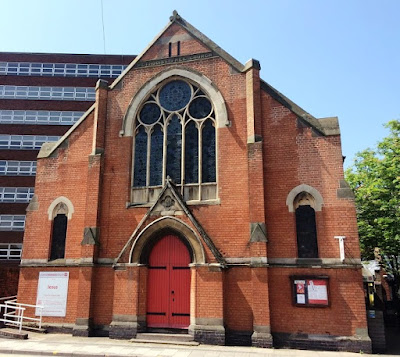 The Central Methodist Church on Aldergate closed on Sunday 22 May 2022 (Photograph: Patrick Comerford)

The last service was held at the Central Methodist Church in Aldergate, Tamworth, on Sunday afternoon (22 May 2022), and the church building, which started life in Tamworth in 1886, is closing. A decision has been taken to refocus the congregation on the 1960s building of Saint Andrew's Methodist Church in Thackeray Drive, Leyfields, now known as New Life Methodist Church.

The decision to close the church means that since the movement was founded in the 18th century, there will be no Methodist congregation or building in Tamworth town centre.

The Methodist Church in Aldergate dates from a split that divided Tamworth’s Methodists in the mid-19th century. A new group was formed calling itself the Wesleyan Reformers and later the Free Methodists. When they left the Bolebridge Street Chapel, they met in a room nearby before acquiring a room in Aldergate that was known as ‘The Hut.’

In the late 19th century, the Free Methodists found the Hut did not meet the needs of a growing congregation. They bought a plot of land in Aldergate for £250. The memorial stones were laid at Easter 1886, and the building was completed late that summer, with a fine spire. The fine, Gothic-style building cost £2,250 and opened for worship on 29 September 1886.

In 1907, the Free Methodists became United Methodists. In 1933, the United, Wesleyan and Primitive Methodist Churches became one Methodist Church, but it was many years before this became a reality in Tamworth. Meanwhile, the original spire was removed in the 1950s.

When they were joined by the Victoria Street Methodists in 1972, the new congregation in Aldergate became known as the Central Methodist Church.

But the premises in Aldergate were inadequate for the needs of the new congregation. It was impossible to extend laterally so it was decided to extend vertically, and a large part of the cost was met by grants from the Joseph Rank Benevolent Trust.

The church reopened on 16 September 1978. In 2005, a further upgrade was undertaken to improve access, toilet facilities and the kitchen. The Aldergate church is now known as the Central Methodist Church.

The church has a church organ by Nicholson and Lord of Walsall (1903) that is Grade II* listed in its own right due to its quality. There are many other fine monuments, memorials and features, some of which were moved there from the Bolebridge Street Methodist Church and the Wesleyan Temple in Victoria Road when they closed.

With its spacious rooms, the church has welcomed many community groups for hold meetings and activities over 136 years. The Tamworth and District Civic Society (TDCS) was memorably re-launched there in 2015. 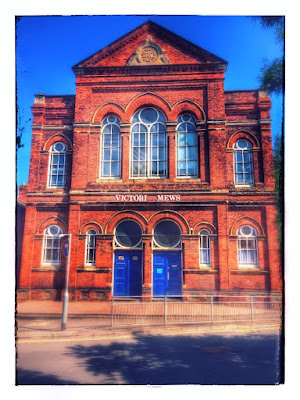 John Wesley (1703-1791), the founding Methodist, first visited Tamworth in 1743. Following disturbances in the Black Country, Wesley rode over to Tamworth to take legal advice from a Counsellor Littleton who lived there. However, the first visit of Methodist preachers to the town is not recorded until 1771.

The early Methodists in Tamworth first met in the home of Samuel and Ann Watton and later in a room in Bolebridge Street. In 1787 John Wesley met the first Sir Robert Peel, who gave the Methodists a site for a permanent chapel in Bolebridge Street. He told them: ‘My lads, do not build your chapel too large. People would like to go to a little chapel well filled better than a large one half full.’

But just as the first Wesleyan chapel in Bolebridge Street had proved too small, the second one also became inadequate, and in the 1870s it was decided to build a new one.

In 1877, Thomas Argyle, a Methodist solicitor, donated a plot of land for a new chapel on the corner of Victoria Road and Back Lane, now Mill Lane.

The Sunday School continued to use Bolebridge Street Chapel until new schoolrooms were built in 1898. The old chapel was sold to Woodcocks’ Printers, who used it for many years. Later, in the 1960s the congregation at Victoria Road was joined by families from the Bolebridge Street Mission when it closed.

The magnificent Victorian edifice of the church was preserved and at first accommodated squash courts. However, the inside was stripped out in 1974 to accommodate a squash club. The old Wesleyan Temple has since been converted into residential apartments, but the façade remains part of the architectural legacy of Tamworth’s church history.

There are still Methodist Churches at Glascote and Hopwas, and the ecumenical church at Saint Martin’s-in the-Delph at Stonydelph is shared between the Church of England and Methodists.