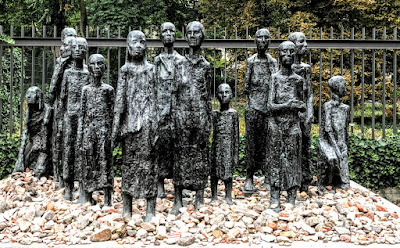 This evening (7 August 2022) marks the conclusion of Tisha B’Ab or Tisha B’Av (תִּשְׁעָה בְּאָב), literally the ‘Ninth of Av,’ the annual fast day in the Jewish calendar recalling many disasters in the course of Jewish history, particularly the destruction of Solomon’s Temple in Jerusalem by the Babylonians and the destruction of the Second Temple by the Romans.

Tisha B’Av is never observed on Shabbat, so when the 9th of Av in the Hebrew calendar falls on a Saturday, as happens this year, the fast is postponed until the 10th of Av.

Tisha B’Av, which concludes at nightfall this evening (7 August 2022), is regarded as the saddest day in the Jewish calendar and it is associated with many other disasters in Jewish history.

Many religious communities mourn the 6 million Jews murdered in the Holocaust on Tisha B’Av, adding the recitation of special kinot related to the Holocaust. Additionally, as members of the Cork Jewish Community were reminded in prepration for this afternoon’s Tisha B’Av commemorations, ‘contemporary Jews often use this day to acknowledge that evil exists in the world, whether we want it to or not, and to reflect how we can make the world a kinder, more welcoming place for everyone. What can you do to give back in a meaningful way?’

This day is significant in the Sephardic tradition in ways that surpass how other holidays are observed, or even how this date is observed in other Jewish traditions. The reason lies in the convergence of this date and the date when Spanish Jews were exiled from their home in Spain in 1492. That year, the King and Queen issues their Edict of Expulsion on 31 March and it was to be completed in four months by the end of July. That date was the day before 9 Ab, making the link to the earlier destruction of Jerusalem particularly strong for Sephardic Jews.

This connection is even stronger because, according to the prophet Obadiah, the Jews of Sepharad were descendants of the exiles of Jerusalem (Galut Yershushalayim Asher B’Spharad), and the the rabbis of Spain understood Sepharad to mean Spain.

The fast on Tisha B’Ab lasts about 25 hours, beginning at sunset on the preceding evening lasting until nightfall the next day. The five traditional prohibitions on Tisha B’Av are:

In western Sephardi Tisha B’Ab services, there is a tendency to emphasise hope for ultimate redemption and national and spiritual restoration, as part of the recalled collective grief.

The way Tisha B’Ab is marked at Bevis Marks Synagogue in London, for example, poignantly evokes melancholy emotions. The Hehal (ark) is draped in a black cloth, as is the Sepher (Torah scroll). Furthermore, the synagogue, famous for its chandeliers, instead uses ‘low lights’ for illumination. These candles attached to the benches themselves, provide just a minimal glow so that the prayers can be recited.

This is one of the most intricate musical services of the year in a synagogue with such an elaborate liturgical tradition. Each kinah (‘lamentation’) is read according to a unique melody, reflecting the significance of the sufferings remembered on this day.

This year, for the first time since Covid, Bevis Marks Synagogue welcomes back Hazan Nachshon Rodrigues Pereira from Amsterdam to lead these intricate, haunting, and remarkable services. The traditional greeting for 9 Ab in Spanish and Portuguese communities is Morir habemos, to which the reply is Ya lo sabemos.

The Bevis Marks Tisha B’Ab service last night was at 10:30 last night and the service this morning at 9 am. 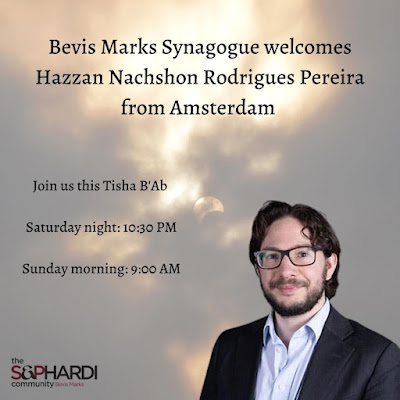