Praying with USPG and the hymns of
Vaughan Williams: Sunday 7 August 2022

‘When they got into the boat, the wind ceased’ (Matthew 14: 32) … a gondola at Rialto Bridge on the Grand Canal in Venice (Photograph: Patrick Comerford, 2022)

Today is the Eighth Sunday after Trinity (7 August), and later this morning I hope to attend the Parish Eucharist in Saint Mary and Saint Giles Church in Stony Stratford. But, before this becomes a busy day, I am taking some time this morning for prayer and reflection. 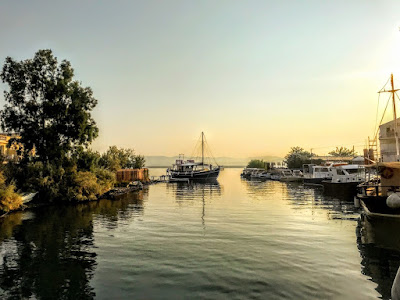 ‘They got into the boat and went on ahead to the other side’ (Matthew 14: 22) … boats at Messonghi in Corfu (Photograph: Patrick Comerford)

This hymn is over 100 years old, yet its concerns are very relevant today, as we are invited to pray about the plight of a world torn by poverty, war and misrule and offered cheap and trite answers by cruel opportunists whose only interest is in power.

In addition, the story of the tune and how Vaughan Williams first heard it have very clear links with the story in this morning’s Gospel reading.

Although this hymn is not included in the Irish Church Hymnal, Edward Darling and Donald Davison, in their Companion to Church Hymnal, suggest the solemn, robust tune underlines the message of the text.

Vaughan Williams, who also used this tune in his ‘Norfolk Rhapsody No 2,’ first heard it in East Hordon, Essex, on 23 April 1904. At the time, he was travelling around the English countryside, collecting traditional folk songs to use in his own compositions. He heard this tune a second time in King’s Lynn on 9 January 1905 when he was introduced in the Tilden Smith, a pub in the old North End, by the Revd Edward Evans or the Revd Alfred Huddle to the singers Thomas Anderson, a 70-year-old fisherman, and James ‘Duggie’ Carter.

The weather that day was rough and the fishermen were unable to get out on The Wash. They had gathered in the Tilden Smith, and among them were Duggie Carter and Joe Anderson, who were singing out songs like the ‘Captain’s Apprentice,’ ‘Dogger Bank’ and ‘The Mermaid.’

The words of the original song that provides this tune tell of a young poacher who was transported to the convict settlement in Van Diemen’s Land, Tasmania. The melodies are said to have influenced some of Vaughan Williams’s later works, including his Norfolk Rhapsodies and Sea Symphony.

The Tilden Smith then stood at the heart of the North End, which was a self-contained fishing community, just a few streets away from Saint Nicholas Chapel, also known as the fishermen’s church. The nearby Fisher Fleet was home to hundreds of boats, while up to 1,000 people lived crammed into the warren of cottages. It has since been bulldozed by slum clearance and to make way for new roads, and the Tilden Smith was renamed The Retreat.

‘Duggie’ Carter sang ‘The Captain’s Apprentice’ and Joe Anderson sang ‘Young Henry the Poacher,’ which Vaughan Williams used in the English Hymnal in 1906 as the tune for Chesterton’s poem. The hymn, No 562, bears the name King’s Lynn. Both Carter and Anderson were known well by the curate of Saint Nicholas’ Chapel, the Revd Alfred Huddle, and would have sung in the chapel regularly, as well as in more secular settings.

GK Chesterton, who was born in 1874 in Campden Hill, Kensington, was a prolific and well-known journalist, author and poet. He found Christianity provided the answers to the many dilemmas and paradoxes he found in life.

He was a friend and contemporary of writers such as George Bernard Shaw, Hilaire Belloc and HG Wells. He died in Beaconsfield, Buckinghamshire, in 1936. His ‘Father Brown’ mystery stories (1911-1936) remain popular and have been adapted for television.

O God of earth and altar,
Bow down and hear our cry,
Our earthly rulers falter,
Our people drift and die;
The walls of gold entomb us,
The swords of scorn divide,
Take not thy thunder from us,
but take away our pride.

From all that terror teaches,
From lies of tongue and pen,
From all the easy speeches
That comfort cruel men,
From sale and profanation
Of honour and the sword,
From sleep and from damnation,
Deliver us, good Lord!

Tie in a living tether
The prince and priest and thrall,
Bind all our lives together,
Smite us and save us all;
In ire and exultation
Aflame with faith, and free,
Lift up a living nation,
A single sword to thee. 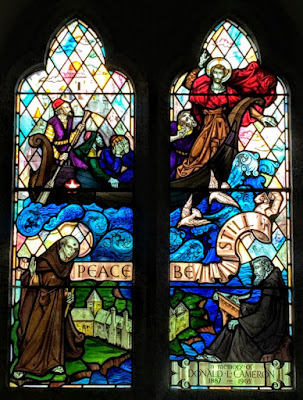 Almighty Lord and everlasting God,
we beseech you to direct, sanctify and govern
both our hearts and bodies
in the ways of your laws
and the works of your commandments;
that through your most mighty protection, both here and ever,
we may be preserved in body and soul;
through our Lord and Saviour Jesus Christ,
who is alive and reigns with you,
in the unity of the Holy Spirit,
one God, now and for ever.

Strengthen for service, Lord,
the hands that have taken holy things;
may the ears which have heard your word
be deaf to clamour and dispute;
may the tongues which have sung your praise
be free from deceit;
may the eyes which have seen the tokens of your love
shine with the light of hope;
and may the bodies which have been fed with your body
be refreshed with the fullness of your life;
glory to you for ever.

The theme in the USPG prayer diary this week is ‘International Youth Day.’ It is introduced this morning by Dorothy deGraft Johnson, a Law student from Ghana, who writes:

‘Irina Bokova, (Director-General of UNESCO), in a statement celebrating International Youth Day, said “Young people are not just our future; they are also our present.”

‘International Youth Day, observed in August each year, is an international day that celebrates, recognises and empowers young people throughout the world to make contributions to their communities and the world at large. The planet is presently home to the biggest generation of youth in history. Young individuals represent optimism and many more capabilities for the future.

‘As we mark another anniversary as a community and a church that cares for the youth just as Jesus did, let us hold on to the faith and work towards that day when the world will be open for the youth to explore and grow, hopefully reaching their full potential. Happy International Youth Day!’

Living Lord,
may we all be filled with the energy of youth.
Let us not be stuck in our ways,
but embrace and adapt to change.

Fishing boats on the Quays in Wexford (Photograph: Patrick Comerford, 2022)