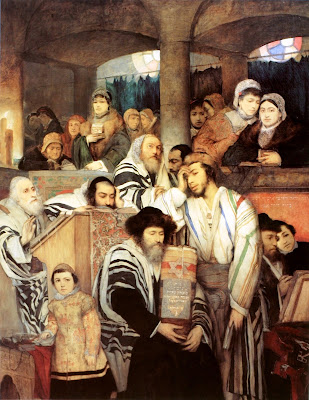 The Jewish High Holy Days, which began with Rosh haShanah last week on Sunday evening (25 September 2022) mark the beginning of the Jewish New Year, welcoming in the year 5783. Yom Kippur 2022 begins at sunset this evening (4 October 2022), when the evening service begins with Kol Nidre, and ends at nightfall tomorrow (5 October).

The High Holy Days, also known as the ‘Days of Awe,’ began on Rosh haShanah (רֹאשׁ הַשָּׁנָה‎) literally meaning the ‘head of the year.’ This is a time of repentance when Jewish people reflect on actions over the previous year. Traditional celebrations will see families and friends spend time together, pray, listen to the sound of the Shofar (the ram’s horn) and eat special food.

Yom Kippur falls on the Hebrew calendar date of 10 Tishrei. The tenth day, Yom Kippur – the Day of Atonement – begins this evening at sunset and ends at nightfall tomorrow.

The evening of Yom Kippur is known as Kol Nidre night because of the Kol Nidre prayer which is charged with so many emotions and so many memories for Jews everywhere. The words are in Aramaic, not Hebrew, and it is sung to a haunting, traditional melody that has inspired many composers and singers.

In synagogues this evening, the Ark is opened and two people take out two or three Torah scrolls. They then take their places, one on each side of the cantor, and the three, forming a symbolic beth din or rabbinical court, recite:

It is believed that Kol Nidre was added to the liturgy of Yom Kippur 10 days after Rosh haShana, the Jewish New Year, because that service is much more solemn, because the Day of Atonement is attuned to the theme of repentance and remorse, and because Yom Kippur services are better attended. Kol Nidre also includes an emotional expression of penitence that sets the theme for the Day of Atonement.

The older text is usually called the Sephardic version, but the two versions are sometimes found side by side. Because it is traditional to recite Kol Nidre three times, some Sephardic communities and a small number of Ashkenazic communities recite both versions.

There is a tradition that makes Kol Nidre more than a technical procedure of annulling vows. Instead, by releasing these vows, God is being asked to reciprocate in kind. In the event that he has pledged not to bring the redemption just yet, in the event that he made an oath to bring harsh judgments on his people in the following year, God is asked to release these vows and instead grant a year of happiness and redemption.

Avinu Malkeinu, the traditional prayer I described on Friday evening, is considered by many as the pinnacle of the Yom Kippur service. The ark is still open and will soon close. As the service is reaching its end, there is a feeling that the gates of heaven are closing. The emotions that have been built up throughout the day are expressed as the entire congregation sings this traditional tune together.

It is an important reminder of how to cherish the past, and allow it to help shape and focus the days ahead. The old and the new are side by side, blessed by renewed energy year after year.


Posted by Patrick Comerford at 18:00