Inter-Faith conference hears of role of Church in challenging extremism 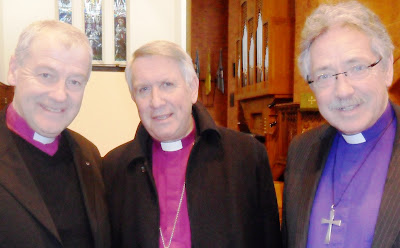 The current [April 2011] edition of the Church Review (Dublin and Glendalough) carries the above photograph and the following full-page report on page 9:

The newly-elected Archbishop of Dublin, Dr Michael Jackson, and the Bishop of Limerick and Killaloe, the Right Revd Trevor Williams, led a group of more than a dozen people from the Church of Ireland taking who took part in an inter-faith training programme in Saint Philip’s Centre in Leicester at the end of February and the beginning of March.

Leicester has a population of almost 300,000 people – and the fourth smallest Anglican cathedral in England. It has a large population of South Asian origin, with well-known Muslim, Sikh, Jain, Hindu and Jewish places of worship. It is said immigrant groups today make up about 40% of Leicester’s population, making it one of the most ethnically diverse cities in Britain. Christianity is the predominant faith, but there are also about 41,000 Hindus, 31,000 Muslims, and 12,000 Sikhs.

Speaking about a major demonstration by the far-right English Defence League in Leicester last October, Bishop Tim Stevens recalled how the cathedral played an “iconic and pivotal role in praying for the peace of the city.” The demonstration was a reminder of risks we live with, Bishop Tim said, and the “great enemy is complacency.”

Political extremism is posing as the true voice of English Christianity, and we need to understand the Biblical foundations for resisting racism and countering far-right extremist political parties, he said. He said bishops need to be more proactive. There is a danger of thinking everything all right when it is probably not so, he warned.

“Our tradition is constantly calling us out of our tribalism,” he said, speaking of the great challenge of what it is to be the new humanity and the new creation. “That is what the Eucharist is about, that is what the Gospel tradition to be about.”

The training conference was organised by Saint Philip’s Centre and the Inter-Faith Working Group of the Church of Ireland. The participants from the Diocese of Dublin and Glendalough included the Revd Canon Patrick Comerford, secretary of the Inter-Faith Working Group and Director of Spiritual Formation, the Church of Ireland Theological Institute; the Revd Darren McCallig, Dean of Residence, Trinity College, Dublin; the Revd John Marchant, chaplain, Dublin City University; and David White of Balbriggan parish, a first year ordinand.

Five Church of Ireland dioceses were represented at the conference, and the other participants included the Dean of Ossory, the Very Revd Katharine Poulton.

The Revd Dr Andrew Davey, national adviser on community and urban affairs to the Archbishops’ Council, spoke of the need to address political extremism in the churches’ engagement with faith communities. He highlighted the new agenda being posed by racists who deny being racists, holocaust deniers who accuse others of being fascists, and self-styled patriots who distort the image of the nation.

Opposition to immigration is often expressed by the far-right in the demonisation of Islam, which is portrayed as colonising and an invading threat, he said The British National Party has grown in areas that have been marked by “white flight,” and the “normalisation” of the party is in danger of taking hold.

Racism denies reconciling work of Jesus Christ, our common humanity, and that all are made in God’s image, he said. “We find our identity not in racial categories but in our shared humanity.”

A panel of speakers also shared local stories. Detective Inspector Geoff Brookes spoke about the value of real partnerships between the police and the community. Raheema Caratella spoke her work as youth engagement worker at Saint Philip’s and of the work of the Leicester Interfaith Youth Hub. Mohammed Dawood, a local Labour councillor, spoke of “our great city,” where the faith communities had publicly stated: “An attack on one of us is an attack on all of us.”

Bishop Trevor Williams also spoke of the experiences of facing up to sectarianism in his work in the Corrymeela Community in Co Antrim, in a parish in West Belfast, and through the Hard Gospel project. We must risk vulnerability one step at a time, he said.

The programme included a visit to Saint John the Baptist Church of England School, accompanied by Janet Ingram, the Leicester Diocesan Religious Education Adviser and Leicester Cathedral Education Officer, and the Revd Jennie Appleby, Rector of Saint John the Baptist Church and a school governor. The headmaster, Andrew McDonald, spoke of the challenge and mission of a large Church of England primary school, working with the local church in a multi-faith society, building relationships.

About 50 per cent of children in the school are Christian, up to 30 per cent Muslim, up to a 20 per cent Hindu, with some Jewish children and children of other backgrounds. As a church-aided school, the collective acts of worship at Saint John’s are Christian based, and while the school acknowledges other faiths it does not celebrate them, Mr McDonald said.

At a panel-led seminar, John Florence of BBC Radio Leicester, and Nick Carter, former editor of the Leicester Mercury, spoke of the role of the Church of England as the driving force behind inter-faith dialogue in Leicester. Four local priests spoke about pastoral issues in the multi-faith context, each speaking from different contexts about the way in which the local church is recognised by people of other faiths as “a place where God is.”

Canon Stephen Foster said many of the problems in inter-faith dialogue were often ones of ignorance or caricature. “But it’s story that brings truth,” he said. “The Church often asks the wrong questions.”

During the week, the group visited the Masjid Umar, one of the most prominent mosques in Leicester, which is close to Saint Philip’s Centre, and the Shree Sanatan Mandir, a large Hindu temple in a former Baptist Church, and had discussions with leading members of Leicester’s Sikh community in the Amritsar restaurant.
Posted by Patrick Comerford at 14:49