An inspiring garden and a marsh ... but where is the holy well?

The wild garden in the former churchyard of Saint Mary-at-Lambeth (Photograph: Patrick Comerford, 2011)

During my stay in London this week, I had a number of brisk, healthy walks, walking between Bloomsbury and Westminster each day, walking through the parks and gardens – such as Russell Square, Tavistock Square, Bloomsbury Square and the Victoria Tower Gardens – and an hour or two strolling through Covent Garden on both Wednesday and Thursday evening.

After the conclusion of the Affirming Catholicism conference in Saint Matthew’s Church, Westminster, I also strolled along the South Bank of the River Thames, between Westminster Bridge and Lambeth Bridge, and back along the opposite side, from Lambeth Bridge through the Victoria Tower Gardens to the Palace of Westminster.

Lambeth Palace, seen from the Victoria Tower Gardens on the opposite side of the Thames, between Lambeth Bridge and the Palace of Westminser (Photograph: Patrick Comerford, 2011)

At Lambeth Palace, I stopped for a while in the former churchyard that is now part of the Garden Museum, once known as the Museum of Garden History. This unique museum is based in the former parish church of Saint Mary-at-Lambeth.

Saint Mary’s Church originally housed the 15th and 16th century tombs of many members of the Howard family, including now-lost memorial brasses to Thomas Howard, 2nd Duke of Norfolk (died 1524) and his wife Agnes Tilney (died 1545), as well as Anne Boleyn’s mother, Elizabeth Howard. Captain William Bligh, best remembered today for his depiction in Mutiny on the Bounty, is also buried in the churchyard.

Saint Mary’s closed in 1972 and was due to be demolished. However, in 1976 John and Rosemary Nicholson found that the tombs in churchyard included the tomb of the 17th century royal gardeners and plant hunters, John Tradescant (1570-1638), and his son, also John Tradescant (1608-1622).

In all, five members of the Tradescant family are buried in the churchyard. The epitaph on their tomb, composed by John Aubrey, reads:

Know, stranger, ere thou pass, beneath this stone
Lie John Tradescant, grandsire, father, son
The last dy’d in his spring, the other two,
Liv’d till they had travelled Orb and Nature through,
As by their choice Collections may appear,
Of what is rare in land, in sea, in air,
Whilst they (as Homer’s Iliad in a nut)
A world of wonders in one closet shut,
These famous Antiquarians that had been
Both Gardeners to the Rose and Lily Queen,
Transplanted now themselves, sleep here & when
Angels shall with their trumpets waken men,
And fire shall purge the world, these three shall rise
And change this Garden then for Paradise.

The discovery of this tomb and its inscription inspired the Nicholsons to create the Museum of Garden History – the world’s first museum dedicated to the history of gardening.

The museum had closed by the time I visited the churchyard, but this alone was worth visiting.

In the early 1980s, a 17th century style knot garden was planted in the churchyard, using authentic plants of the period. In its 25th anniversary year in 2002 the museum launched a campaign to raise at least £600,000 to pay for a general overhaul of its facilities.

The knot garden and its surrounds are planted with species introduced by the Tradescants – such as the scarlet runner bean, red maple and tulip tree – and many others grown by them in their Lambeth garden. It is not only historically significant but also a lush and beautiful spot in the centre of London, cared for by a small horticultural team of staff and volunteers.

I got back to Dublin last night – just in time to join Canon Horace McKinley in Whitechurch Parish as he celebrated the fortieth anniversary of his ordination to the priesthood. 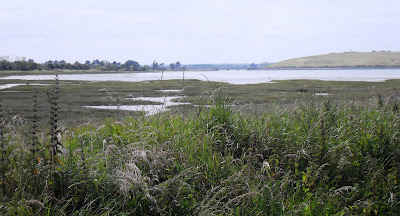 I failed to find Lynders Lane and Saint Mochuda’s Well ... instead I found a beautiful view across the marsh towards Rogerstown Estuary (Photograph: Patrick Comerford, 2011)

It was a pleasure to walk on some beaches again this afternoon. In Portrane, I went in search of Lynders Lane and Saint Mochuda’s Well in the Burrow. I found, although Lynders Lane still appears on the Ordnance Survey maps, the roadsign declares it is Marsh Lane, and while Saint Mochuda’s Well is marked on the map a bend on the road on the maps, I failed to find it. Instead, the search was rewarded with magnificent views of the marsh that empties into Rogerstown Estuary, and the sound of the marsh birds.

Giving up those searches in Portrane, two of us drove further north to Skerries, to walk the South Beach and around Red Island before stopping at the Harbour for an ice-cream at ‘Storm-in-a-Teacup.’

By now the promised sunshine was blessing the area, and the harbour bars were crowded with bikers. It is proving to be a very pleasant and enjoyable summer,
Posted by Patrick Comerford at 21:29