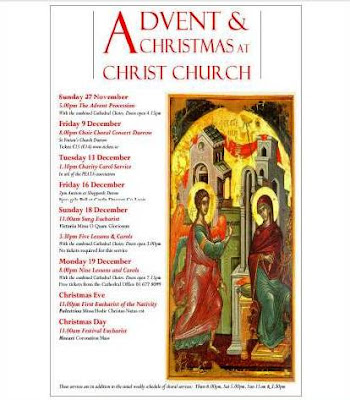 Advent, the beginning of the Church Year, begins today [Sunday 27 November 2011], the First Sunday of Advent. I am preaching at the Cathedral Eucharist in Christ Church Cathedral, Dublin, at 11 a.m. this morning, and taking part in the Advent Procession at 5 p.m. this evening.

The celebrant at the Cathedral Eucharist at 11 a.m. this morning is the Dean of Christ Church Cathedral, the Very Revd Dermot Dunne, and the setting is the Messe Solennelle by Louis Vierne (1870-1937), who died after a stroke or a heart attack while giving an organ recital at Notre-Dame de Paris.

The choir is singing a section of the Advent Prose in the procession, and the first candle on the Advent Wreath is being lit before the Gospel reading. The Offertory hymn is one of my favourite Advent hymns, Long ago, prophets knew, by the Revd Fred Pratt Green (1903-2000), to the tune Personent hodie, a melody from Piae Cantiones (1582).

Green’s hymns reflect his rejection of fundamentalism and show his concern with social issues. Many that were written to supply the liturgical needs of the modern church, looking at topics or events for which few traditional hymns were available.

This afternoon’s Advent Procession at 5 p.m. includes carols and readings by candlelight. The music sung by the Cathedral Choirs includes:

● Benjamin Britten (1913-1976), Deo Gratias: This from Britten’s A Ceremony of Carols (1942), completed at the height of World War II, and is his setting of a 15th century carol.
● William Byrd (1539-1623), Rorate Colei;
● Gerald Finzi (1901-1956), Magnificat: This is one of the most extended of Finzi’s shorter choral works, and was written in 1952 for the choir of Smith College in Northampton, Massachusetts – the composer’s first overseas commission. It was intended for a Christmas Vespers service, rather than for standard liturgical use, concluding with an Amen and not a Gloria.
● Herbert Howells (1892-1983), A Spotless Rose: one of his Three Carol Anthems -- the other two are Here is the little door and Sing Lullaby. They were composed between 1918 and 1920, and they are the first of his choral works to “consistently display the same level of aural imagination and technical refinement as his chamber music and songs of the same period ...”
● Kenneth Leighton (1929-1988), Of a Rose is all my song: This is a setting for a 15th century traditional, anonymous text.
● Paul Manz: Peace be to you: This work draws on the words in Revelation 21: 1-4.

The works by Howells and Leighton are three of the most beloved Christmas pieces in the Anglican tradition, while Manz is a Lutheran composer.

The Special Advent and Christmas services in Christ Church Cathedral continue throughout December, and this year they include:

Meanwhile, Christ Church Cathedral is also hosting Christmas markets in the crypt and cathedral grounds. The first of these was yesterday [Saturday, 26 November] and the Christmas markets continue for the next three Saturdays (3, 10 and 17 December 2011).