From Temple Bar to Templeogue in cherry blossom time 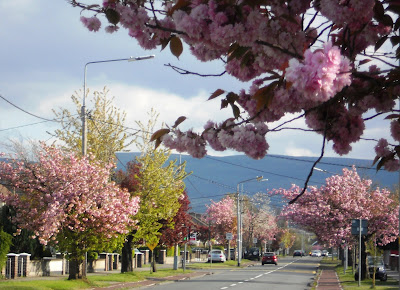 The bright and beautiful Easter continued today. I was still smiling about this at the Cathedral Eucharist in Christ Church Cathedral this morning as I listened to Epistle reading, which included these words: “This is the message we have heard from him and proclaim to you, that God is light and in him there is no darkness at all. If we say that we have fellowship with him while we are walking in darkness, we lie and do not do what is true; but if we walk in the light as he himself is in the light, we have fellowship with one another ...” (I John 1: 5-7).

At the Cathedral Eucharist, on the Second Sunday of Easter, I had the liturgical role of deacon, reading the Gospel and assisting with chalice at the administration of Holy Communion. After lunch in ‘The Larder’ in Parliament Street, some book buying in the second bookshops of Temple Bar, and coffee in La Dolce Vita, I was back in the Cathedral for Evensong, at which I read the lessons (Isaiah 26: 1-9, 19, Luke 24: 1-12) and led the intercessions.

In Temple Bar on the Second Sunday of Easter (Photograph: Patrick Comerford, 2012)

On the way home to Knocklyon, the cherry trees lining Cypress Grove Road were in full bloom in riotous display of pink and white, like a grove of cherry blossoms framing the view towards Templeogue Bridge, with the blue mountains in the distance.

In the evening sunshine, I stopped to photograph the cherry trees and Cypress Grove House, a Georgian, three-storey former country house that was built between 1740 and 1760. The house has timber sash windows throughout, a large, double-leaf timber panelled door with large sidelights, framed by slender engaged columns and all under a wide, simple radial fanlight with an internal iron grille. The walls are rendered, ruled and lined; there is a hipped slate roof behind the parapet, with three rendered chimney stacks. The wings and extensions include a later chapel and an external exit stair.

Cypress Grove House was built in the first half of the 18th century by a Mr Paine and later became the residence of Sir William Cooper, Master in Chancery and MP, who died here in 1761. 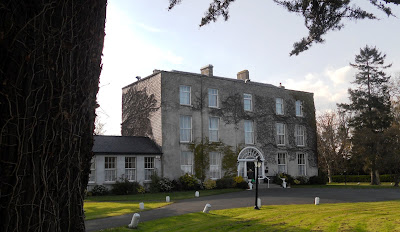 Lady Clanbrassil’s daughter, Lady Anne Hamilton, married the Earl of Roden, and so Cypress Grove House later passed from Lady Clanbrassil to her grandson, Robert Jocelyn (1756-1820), Viscount Jocelyn, who became the 2nd Earl of Roden in 1797. He had been an MP for Maryborough and later for Dundalk in the Irish House of Commons, and

Roden was an older brother of the notorious Percy Jocelyn (1764-1843). A clerical contemporary, the Revd Thomas Hore, said Jocelyn was the “most idle of all reverend idlers” and asked him rhetorically: “Do you ever write a sermon? Most worthy Rector of Creggan – not you.” But Jocelyn still managed to become the Church of Ireland Bishop of Ferns (1809-1820) and then Bishop of Clogher (1820-1822) before he was forced out of office after he was caught on 19 July 1822 in a compromising position with a soldier from the Grenadier Guards, John Moverley, in the back room of The White Lion, a public house in St Albans Place, off The Haymarket in Westminster.

The bishop and the soldier were released on bail, provided by the Earl of Roden and others. But Percy Jocelyn broke bail and absconded to Scotland, where he worked as a butler under an assumed name. He was deposed and defrocked in his absence by the Metropolitan Court of Armagh in October 1822 for “the crimes of immorality, incontinence sodomitical practices, habits, and propensities, and neglect of his spiritual, judicial, and ministerial duties.”

Jocelyn was the most senior bishop to be involved in a public homosexual scandal in the 19th century. His story became a subject of satire and popular ribaldry, resulting in more than a dozen illustrated satirical cartoons, pamphlets, and limericks. Indeed, the scandal was so great that in the days following “it was not safe for a bishop to show himself in the streets of London,” according to Charles Manners, who was Archbishop of Canterbury at the time.

On 9 August 1822, Robert Stewart, Viscount Castlereagh, who was both the Foreign Secretary and the leader of the House of Commons, told King George IV that he was being blackmailed and that he was “accused of the same crime as the Bishop of Clogher.”

The king is said to have advised Castereagh to “consult a physician.” Instead, he went to his country seat in Kent, and three days later he slit his throat with a penknife.

Cypress Grove House was later occupied by the Orr family, who were merchants, the Duffys, who had calico print works at Ballsbridge, and Charles King. From 1908 to 1925, GH Stepney lived at Cypress Grove House and changed the name of the house to Alberta. But the original name was restored by the next owner, Patrick Walshe.

The house is now owned by the Missionaries of Africa (White Fathers), a missionary order founded in 1863 by Cardinal Martial Lavigerie (1825-1892) Archbishop of Carthage and Algiers.

Three of the original cypress trees that give their name to the house and the streets around it are still standing to the east of the house. But it was the cherry trees that caught my imagination for a short time in the springtime lights of this April evening.
Posted by Patrick Comerford at 20:32