In Dublin on a sunny Summer evening

The Irish actor Noel Purcell made Dublin Saunter his own song:

Grafton Street’s a wonderland,
There’s magic in the air,
There’s diamonds in the lady’s eyes,
And gold-dust in her hair.

And if you don’t believe me
Come and meet me there,
In Dublin on a sunny Summer morning.

Yesterday turned out to be a summer day in Dublin, and the summer feeling lasted well past 11 last night.

Instead of strolling in Saint Stephen’s Green, we strolled from Dame Street through Temple Bar in the warmth of the evening sun.

The sun brings out the best in people in Dublin, and the city centre was packed with both office workers who had stayed on to enjoy the evening and tourists enjoying the buskers, the music, the cobble streets, the mime artists and the open air cafés. 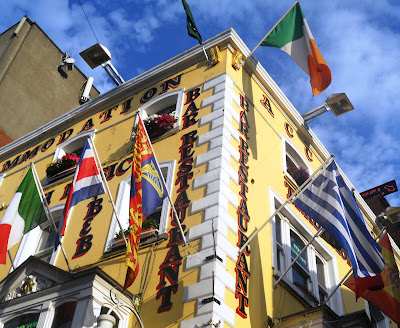 Tables were out on the streets, as if we never had a rainy day this July and were never going to have another one this month or next. The hanging baskets and flags bedecking the facades of the pubs and restaurants added to the colour and the decoration.

Standing on the Millennium Bridge between Temple Bar and the Italian Quarter, the sun was setting behind the Four Courts to the west, casting a shimmering light on the river as it flowed under the Ha’penny Bridge, O’Connell Bridge and past Liberty Hall and the Custom House out to Dublin Bay to the east.

Three of us had dinner in the Taverna on the corner of Ormond Quay and Bloom Lane in the Italian Quarter, and shared a bottle of wine from Mick Wallace’s own vineyard in Piemonte. The conversation solved the political and economic problems of Ireland and the world, and we recalled family memories from Achill Island to Cambridge, from Greece to East Asia and Africa, and debated the competing claims for living in Manhattan or Bloomsbury. 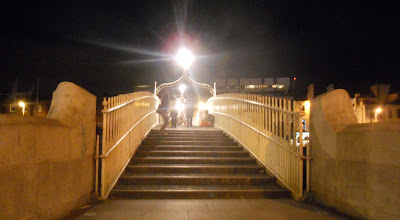 We adjourned further along Bloom Lane to Enoteca Delle Langhe, another Wallace house, for another glass of wine, before strolling back over the Ha’penny Bridge and through Temple Bar again.

It was after 11 when we stood in the yellow lights of College Green waiting for the 49 bus home.

Posted by Patrick Comerford at 10:09

Email ThisBlogThis!Share to TwitterShare to FacebookShare to Pinterest
Labels: Dublin