This one is only for ABU fans
... and for Wexford fans 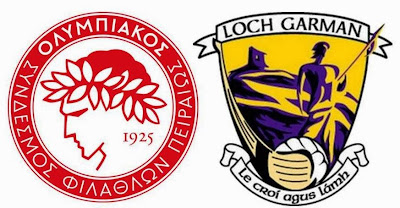 British television crews have been following the comings and goings of one amazing football fan.

Last Saturday, they saw this man dejected and crying at Crystal Palace, after Manchester United had a 2-0 away win. Ten days earlier he was picked up on cameras muttering to himself: “Arsenal didn’t win, but at least Man U didn’t get an away goal.”

Before that, there he was at Old Trafford, cheering on Fulham, obviously filled with glee even though they the only managed a draw.

And, at the beginning of the month, he was in the Potteries, overcome with joy at Stoke’s 2-1 win over United.

Now he’s been caught on Greek Television. There he was in Piraeus last night, cheering on Olympiakos, sitting in the front row in Karaiskakis Stadium, just behind that red and white banner.

His heart was in his mouth as three minutes extra time turned to 3½, and he was overcome with joy when extended extra time and a corner still refused to give Man U that coveted away goal.

The English cameras and journalists rushed to interview him. He had fluent English.

No, he wasn’t Greek, he told them. No he’s not from Stoke or London, he insisted.

“But you have fluent English. Where are you from?”

“And are there no circumstances under which you would support Manchester United?”

“Well, yes, perhaps if they were playing Kilkenny in hurling.”