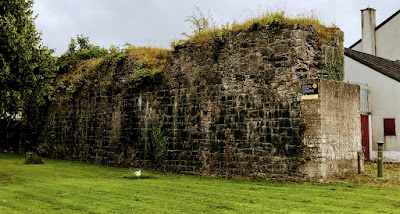 As I strolled through King’s Island after my arrival back in Limerick late on Thursday [13 July 2017], I set out to follow the path of some of the remaining portions of the old city walls.

The mediaeval city had two sets of walls, surrounding Englishtown on King’s Island, and Irishtown to the south. In the late 17th century, as civic pride was renewed and blossomed, city gates were rebuilt, with new Latin mottoes or inscriptions, and many maps show the paired walled cities linked by the gated Baal’s Bridge.

Limerick was a walled city with 17 gates until the 1760s and the development of Georgian Limerick, driven by Edmund Sexton Pery, speaker of the Irish House of Commons, who gave his name to Netown Pery, the heart of the new Georgian city centre.

In 1760, the walls of Limerick were declared redundant, and Pery’s initiative from 1765 on extended the city south of the Abbey River and the ancient medieval city. As part of this expansion of Limerick, most of the walls of the mediaeval city were torn down. 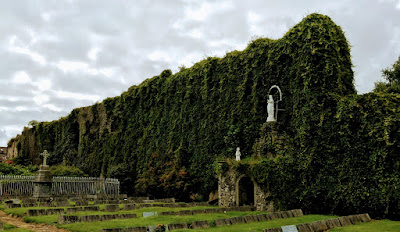 Until these developments, the east side of Englishtown was lined with religious foundations, and some of these were incorporated into the walled area. However, all that remains of these friaries and convents today is the East Wall of the Dominican Friary, which was founded in 1227 by Donnchadh Cairbbreach O Brien on land donated by King Henry III. Donnchadh Cairbbreach was buried in the friary in 1242.

A further royal grant of land was made in 1285 by Edward I, who claimed the friary had been founded by his ancestor.

Two blocked arched openings may once have given the Dominican friars of Saint Saviour’s access to the walls and orchards outside the city walls.

At the Dissolution of the monastic houses in 1541, Saint Saviour’s Friary was suppressed and their friary and the friars’ lands and estates, including fishing rights on the River Shannon, were granted to James FitzGerald, 14th Earl of Desmond, in 1543.

Desmond may have only intended to hold the property in trust for the Dominicans, for he returned it to the friars during the reign of Queen Mary Tudor (1553-1558). In 1589, the friary was granted to Robert Annesley, a captain in the force that suppressed the Desmond rebellion in Ireland who securing a grant of 2,600 acres of former Desmond estates in Limerick.

Annesley’s descendants held the titles of Baron Altham, Viscount Valentia, Earl of Anglesey and Earl of Mountnorris, and the family was involved in a famous scandal in the 18th century that involved kidnapping the family heir when he was a boy. 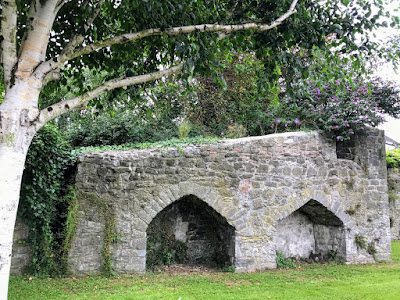 The surviving Sallyport by the walls of Saint Mary’s Convent of Mercy (Photograph: Patrick Comerford, 2017)

Annesley seems to have profited by selling the priory and its lands to James Gould, who was in possession of them in 1600. During the Catholic Confederacy, the site was once again in the possession of the Dominicans, and in 1644 Pope Vincent X gave a charter for a university at Saint Saviour’s.

Terence Albert O’Brien (1600-1651), the Dominican Bishop of Emly who was executed by General Ireton in Limerick on 30 October 1651, is said to be buried in the priory. He is one of the Seventeen Irish Martyrs beatified by Pope John Paul II in 1992.

With changes in Limerick’s political fortunes in the century that followed, from the 1650s to the 1750s, the buildings of the Dominican Friary fell into ruins, and only the east wall of the friary church survives.

In 1812, three Franciscan or Poor Clare nuns moved into a house near the ruins of the Dominican Friary, built a chapel, choir and cells, and built a school for the children of this part of Limerick. Two of the nuns returned to Dublin in 1816, but another three nuns arrived from Galway soon after. However, the Poor Clare convent was dissolved in 1831.

Seven years later, the Sisters of Mercy moved to Limerick in 1838, and they moved into the convent building, fronting onto Island Road. When Mother Catherine McAuley, who founded the Sisters of Mercy, and Mother Elizabeth Moore entered the doorway on 24 September 1838 to found Saint Mary’s Convent, they were welcomed by the two remaining Poor Clare sisters.

Island Road roughly follows the line of the city walls that had stood from 1237, and part of the walls can still be seen close along the boundary walls of the former Dominican Priory and Mercy Convent. 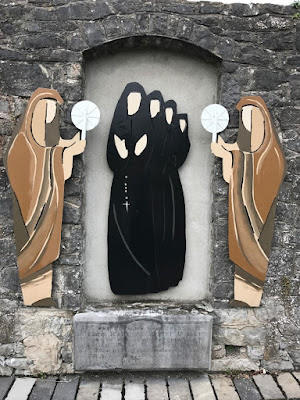 A wall display recalls the Mercy Sisters being welcomed to Limerick by the Poor Clares (Photograph: Patrick Comerford, 2017)