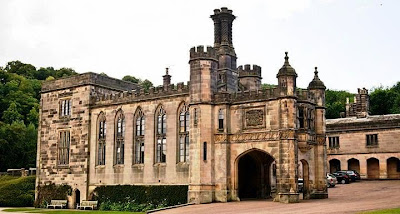 The good news is heard that day by Parthians, Medes, Elamites, and residents of Mesopotamia, Judea and Cappadocia, Pontus and Asia, Phrygia and Pamphylia, Egypt and parts of Libya, visitors from Rome, Cretans and Arabs – each in our own languages.

But some of the other places are lost in time and antiquity, such as Phrygia and Pamphylia. Although I have been to the each of these too, their names have long been changed.

But, I wondered, where was Elam?

Elam was an ancient Pre-Iranic civilisation centred in the far west and south-west of what is now modern-day Iran, stretching from the lowlands of what is now Khuzestan and Ilam Province as well as a small part of southern Iraq.

Elamite states were among the leading political forces in the Ancient Near East, and in classical literature, Elam was more often known as Susiana. The Elamite civilisation was defeated and absorbed over time by its neighbours, but its memory survives today in the name of Ilam, a city and a province in western Ian, on the borders of Iraq, and the people living there are mainly Kurds. 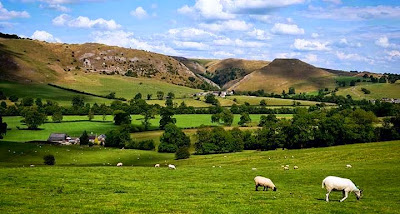 But, distracted as I was by the names of ancient Elam and present-day Ilam, my mind also wandered back in time to Ilam (prounced Eye-Lamb) in the Staffordshire Peaks, where I spent a delightful few days many years ago in my late teens.

I had hitch-hiked from Lichfield, where I was staying, to Ashbourne and from there, following in the footsteps of Lichfield’s greatest writer, Samuel Johnson, it was another four or five-mile walk to Ilam, where I stayed at Ilam Hall, which has a stately tale to tell but was then (and still is) a youth hostel.

Samuel Johnson often visited Ilam Hall, and went fishing at Dovedale. Part of the grounds is known as Paradise Walk, and it is said this valley inspired Johnson when he was writing his novel Rasselas, the story of an Abyssinian Prince who lived in Happy Valley. He wrote it hastily in 1759 to raise money for his mother who was seriously ill.

Boswell would recall in his biography of Johnson: “Ilam has grandeur tempered with softness: the walker congratulates his own arrival at the place, and is grieved to think he must ever leave it.”

Later, Jean-Jacques Rousseau visited Ilam on his walks between Ellastone and Dovedale.

The Revd Bernard Port was both the lord of the manor and Vicar of Ilam in the 19th century. But in 1809, Ilam Hall was sold to the brewer David Pike Watts, and it was then inherited by his daughter Mary who married the wealthy industrialist Jesse Russell, who changed his name to Jesse Watts-Russell. 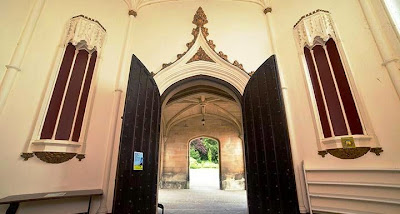 Jesse Watts-Russell was High Sheriff of Staffordshire and Conservative MP for the rotten borough of Gatton. He decided to tear down the old Tudor half-timbered manor house and commissioned James Trubshaw (1777-1853) from Colwich, near Rugeley, to build a new Ilam Hall in the Gothic style (1821-1826).

As the new Gothic Hall was being built, John Edwards wrote his lengthy poem ‘The Tour of the Dove’ in 1821:

Ilam, thy ancient Hall is swept away!
A fairer soon shall lift its domes and towers;
While still thy fountain-deeps ebullient play,
And newborn rivers grace thy laurel bowers
And fossil grots. Strike on, and bring the hours,
Thou clock embosomed deep in ivy bloom!
Time holds the garland yet of Rousseau’s flowers;
Still broods antiquity o’er Bertram’s tomb,
And Congreve’s hermit cell, shrouded in sylvan gloom.

Lorde Byron once wrote of Dovedale to the Irish poet Thomas Moore saying: “I can assure you there are things in Derbyshire as noble as Greece or Switzerland.” Perhaps it was thoughts like this that led Watts-Russell to imagine that the valley and surrounding hills were like the Alps, and so he asked Sir George Gilbert Scott (1811-1878) to design new cottages in the style of Swiss chalets where he rehoused most of the villagers who were his tenants. He also built and funded the village school in 1857.

By the early 1930s, Ilam Hall had been sold for demolition. Demolition work was well under way, and all that was left was the entrance porch and hall, the Great Hall and the service wing when the flour magnate Sir Robert McDougal bought it for the National Trust.

It was agreed that the parts of Ilam Hall that had escaped demolition should be used as a youth hostel, and today Ilam Hall is a Grade II* listed building, owned by the National Trust. Since 1935, it has been run by the Youth Hostels Association.

The youth hostel at Ilam underwent an extensive £2 million refurbishment programme in 2008/2009 and now offers an excellent standard of accommodation for families, individuals and school groups. The majority of bedrooms offer en-suite accommodation with a mixture of double, four and six bedded rooms. There are two ground floor bedrooms with en-suite disabled facilities. The restaurant serves food made from produce sourced locally from Staffordshire and the Derbyshire Dales. The bar serves wines, draught and bottle beers and soft drinks and is open to non-residents. The grounds are open to the public, and are a starting point for a river walk.

It is said that Ilam dates from Saxon times or earlier. The Church of the Holy Cross was originally Saxon, although the church is now mainly 17th and 19th century. Some of its Saxon origins can be seen in its carved stone Saxon font, the round bowl carved with humans and dragons, and in two stone cross shafts in the churchyard. The base of the church tower dates from the 13th century.

The church, with three chapels, was also restored in the 19th century by Sir George Gilbert Scott. The Chapel of Saint Bertram, built in 1618 by the Meverell, Port and Hurt families, has the remains and shrine of the Saint Bertram or Bertelin. He was an eighth century son of a Mercian king who renounced his royal heritage for prayer and meditation after his wife and child were killed by wolves. He is said to have converted many to Christianity, and his shrine was a point of pilgrimage in the Middle Ages.

The church also houses a majestic mausoleum chapel for members of the Pike Watts family, with a dramatic sculpture by Francis Chantrey of David Pike Watts on his deathbed blessing his daughter Mary and her three children. Some visitors find this monument overwhelming, while the architectural historian Sir Nikolaus Pevsner has described it as “theatrical ... but not at all without meaning.” Chantrey also designed the statue of the Sleeping Children in Lichfield Cathedral.

The former vicarage, Dovedale House, stands near the entrance to Ilam Hall. This was once the vicarage where the Revd Bernard Port once lived, and has been run by the Diocese of Lichfield as a residential youth centre since 1967.

The Dovedale Fete, which takes place next Monday [25 May 2015] always takes place on the Bank Holiday Monday at the end of May, always in the country garden of Dovedale House. 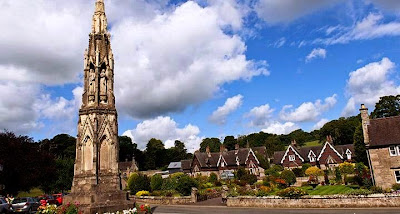 A prominent landmark is the Grade II* listed Mary Watts Russell Memorial Cross, at a roundabout at a junction where a lane branches off towards Blore. This ornate, Gothic-style obelisk of local limestone was designed by the architect John Macduff Derick, in consultation with Scott. It stands on a three-step plinth, has two tiers of statues and is surmounted by a spire topped with a cross. The cross includes six statues of angels carved in Caen stone by Richard Westmacott (1799-1872).

llam Cross was originally erected by Jesse Watts Russell in 1841 in memory of his wife Mary, and has been described as “one of the finest Gothic revival monuments in the country.” It is in the style of an Eleanor Cross and is modelled on one of the crosses which Edward I had erected at each stopping place of the body of his queen, Eleanor of Castile, on its progress from Nottinghamshire, where she died, to her tomb in Westminster Abbey, in 1290.

It bears some resemblance in style to the decorated façade of Lichfield Cathedral, which was renovated and restored by Scott.

Out of his experiences in Ilam and Dovedale, Izaak Walton first published the The Compleat Angler in 1653, and he continued to add to it for a quarter of a century. There was a second edition in 1655, a third in 1661, a fourth in 1668 and a fifth in 1676. In this last edition the original 13 chapters had grown to 21, and a second part was added by his friend Charles Cotton.

Perhaps that in itself is a message infused with the spirit of Pentecost.

Click to see The Ilam Story, an 18 metre folk art painting of the history of Ilam.