Sir John Leslie: a reference in
his obituary in ‘The Irish Times’ 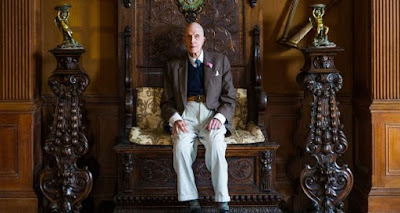 Sir John Leslie: December 6th, 1916-April 18th, 2016. During the second World War he led a unit that held up the German advance at Boulogne-sur-Mer, buying time for the British evacuation at Dunkirk. Photograph: Naoise Culhane

My work on the genealogy of the Leslie family is referred to an obituary of Sir John Leslie in ‘The Irish Times’ this morning [23 April 2016], and provides much of the background information on his family history:

Captain Sir John Leslie, who has died in his 100th year, was a proud Irishman who fought in the British army in the second World War, an Ulster landowner, an accomplished painter of watercolours and a disco-dancing enthusiast who celebrated his 85th birthday with a visit to Privilege, a vast venue dedicated to eardrum-shattering “house music” on the Spanish island of Ibiza.

In recent years he could fairly lay claim to the title of “Ireland’s oldest raver”. Announcing his death this week, his family described dance music as “perhaps his most endearing hobby”, along with membership of the Order of Malta and restoring historic buildings.

The Leslie family of Castle Leslie, Co Monaghan, was known for its allegiance to Ireland and Britain.

John Leslie was the eldest son of Sir Shane Leslie, a writer who had changed his first name from John, converted to Catholicism, embraced Irish nationalism while maintaining friendships with Éamon de Valera and Winston Churchill, to whom he was related. The family had a tradition of producing independent spirits, some would call them eccentrics, of which John Leslie – always known as Jack – was proud to be one.

Another Anglican clergyman, Jonathan Swift, after a visit to Castle Leslie, dipped his quill in acid and wrote about the library there: “With rows and rows of books upon the shelves Written by the Leslies/All about themselves”.

In 1940, when the British Expeditionary Force in France was retreating and being evacuated under fire, Leslie was an officer in the Irish Guards. He commanded a unit which held up the German advance at Boulogne-sur-Mer for two crucial hours, buying time for the British evacuation at Dunkirk and saving the lives of many of his comrades.

“Bullets were whizzing past my head on both sides,” he said afterwards. “Over and over again, I thought my time had come.”

Captured by the Germans, he spent five years as a prisoner of war, passing the time painting watercolours. He took a considerable risk by sending a postcard through the camp mail to British prime minister Winston Churchill asking him to intervene to exchange prisoners who were in a bad way.

This alerted the Germans to the fact they held a valuable hostage, Leslie’s paternal grandmother Leonie Jerome, and Churchill’s mother, Jennie Jerome, a celebrated society beauty, were sisters. That postcard is now in the Imperial War Museum in London.

After the war, he moved to New York and later travelled around Europe, settling in Rome in a former monastery. At the age of 78 he returned to his family’s home at Castle Leslie.

He had earlier made over the house to his sister, the writer Anita Leslie. She too had served in the second World War as a mechanic and ambulance driver in the Middle East, and was honoured by France with the Croix de Guerre.

In turn she would pass Castle Leslie on to her younger brother Desmond, who was known for his interest in UFOs, and her son Richard King.

In 2002, Jack Leslie inadvertently disclosed to the press in advance the news that the castle would be used as the venue of the wedding of former Beatle Paul McCartney to Heather Mills.

John Norman Ide Leslie was the eldest son of Shane (John) Leslie and Marjorie Ide, whose father Henry had been governor general of the Philippines. Leslie was educated in England, at the Catholic Downside school and Magdalene College Cambridge. He joined the Irish Guards in 1937 at the age of 21. He became the fourth baronet of Glaslough and Pettigo when his father died in 1971.

In his 80s Leslie was to be seen “bopping” in nightclubs in the towns of Monaghan, Clones and Carrickmacross, waving his arms around in time to the beat and sporting his trademark Tam O’Shanter.

In 2015, Leslie received France’s highest decoration, the Légion d’honneur at a ceremony in the French embassy in Dublin in recognition of his wartime courage. Leslie never married. His older sister Anita died in 1985, and his younger brother Desmond in 2001.