Discovering the difference between
Puffin Island and Puffin stamps 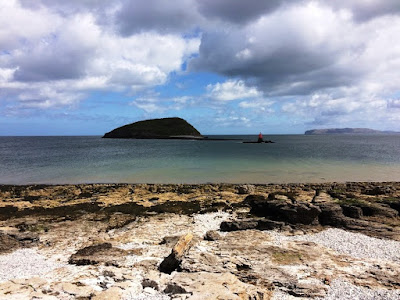 Like most schoolboys of my age, I spent some time – perhaps as much as six months – as an enthusiastic stamp collector.

I remember the glee I had in finding Puffin stamps that could not fit into the categories provided. Which country were they from? Were they real postage stamps?

And, like schoolboys in the early 1960s, I gave up stamp collecting after that initial flush of enthusiasm. As a comedian once said, I realised philately was getting me nowhere.

But in the back of my mind, I always thought that Puffin Island and Lundy Island where the stamps came from were one and the same place.

Now, however, I know otherwise.

During my weekend in north Wales, I went for beach walks in Beaumaris, at Port Meirion and in Penmon on the most easterly tip of the island of Anglesey. But the weather prevented two of us from booking a planned boat trip from Beaumaris Pier around Puffin Island. We thought it might have been a little like our visit to Ireland’s Eye two years ago, or similar to a boat trip around Dalkey Island a few weeks later. 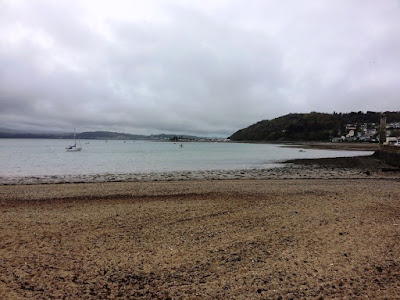 A walk on the beach beside Beaumaris Pier earlier this week (Photograph: Patrick Comerford, 2o16)

We put aside any plans for a boat trip, and instead decided to visit the ancient Celtic monastic site at Penmon on Monday afternoon. And there, as we walked along the beach, we found ourselves, by surprise, looking out onto Puffin Island, half a mile off the coast.

This island is called Puffin Island in English, but its name in Welsh name is Ynys Seiriol (Saint Seiriol’s Island). Local folklore says Saint Seiriol established a cell or hermitage and a community on here at the same time as he founded his monastery at Penmon.

Tradition also says Saint Seiriol and perhaps is buried on Puffin Island, along with Maelgwn Gwynedd, the King of Gwynedd who helped the saint establish his monastery in the first half of the sixth century.

The Vikings knew the island as Priestholm. The monastic community there managed to survive the Viking attacks on Penmon in the tenth century, and the island has a number of ruins of mediaeval monastic buildings, including the tower of a 12th century church.

The island is mentioned by Gerald of Wales in his Journey through Wales in 1188. He notes that it was an ecclesiastical settlement at the time, “inhabited by hermits, living by manual labour and serving God.” He also says that, according to legend, whenever there was strife within the community a plague of small mice would devour all their food. 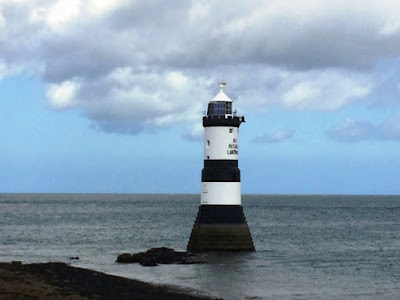 When Lewis Morris made a hydrographic survey of the coast of Wales in 1748, he suggested converting the tower of the ruined church on Puffin Island into a lighthouse, but his proposals were never implemented.

Almost a century later, on 17 August 1831, the Rothesay Castle, a wooden-hulled paddle steamer on a day trip from Liverpool, sank in very heavy seas. More than 140 people were on board, but only 23 of them survived. Afterwards, the Trwyn Du Lighthouse and a lifeboat station were built in efforts to prevent similar tragedies.

Trwyn Du Lighthouse stands at Dinmor Point, at the north entrance to the Menai Strait and marks the passage between Anglesey and Puffin Island.

The lighthouse is 29 metres tall. It was designed by James Walker and built in 1835-1838 at a price of £11,589. This was Walker’s first sea-washed tower, and it became a prototype for his more ambitious towers.

The lighthouse has a stepped base designed to discourage the huge upsurge of waves that had afflicted earlier lighthouses on the site and reduce the force of the water at the bottom of the tower.

Austere vertical walls, instead of the usual graceful lines of other rock towers, are probably an economy measure. The tower has a crenelated stone parapet, in preference to iron railings on the gallery, and narrows in diameter above the half-way point. Walker used these features in his other lighthouse designs. The tower is distinguished by its original three black bands painted on a white background.

The tower has been without any resident staff since 1922, the lamp was converted to solar power in 1996 and the lighthouse was modernised extensively at the same time.

Today, the lighthouse has a 15,000 candela light that can be seen 22 km away. A 178 kg fog bell that sounds once every 30 seconds, and the lighthouse is checked from Holyhead Control Centre.

A lifeboat station built nearby in 1832. Over the years, the Penmon lifeboats saved at least 143 lives until the station closed in 1915, giving way to a lifeboat at Beaumaris.

Puffin Island once had large numbers of puffins and guillemots. However, a more recent plague of brown rats made their way onto the island in 1890s, decimating the populations of nesting birds. At this time the puffin population was already declining because the birds had become a delicacy, but the rats further reduced their numbers to just 20 pairs a few years ago.

The Countryside Council for Wales began a programme in 1998 to rid the island of the rats, in the hope of encouraging the birds to return. Puffin Island is also home to cormorants, shags and fulmar, as well as a colony of grey seals. The tour operators from Beaumaris also offer possible sightings of dolphins and porpoise. 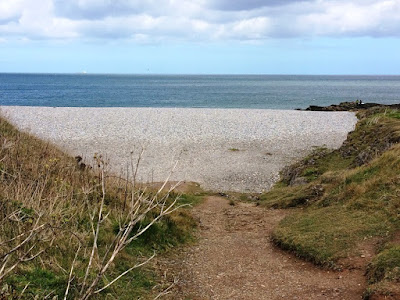 The beach at Penmon has received many awards (Photograph: Patrick Comerford, 2016)

The beach at Penmon has received many awards and since 2003 has displayed the yellow and blue flag. The area is popular with local people and visitors alike because of its monastic sites, its tranquillity, the bracing air and the fine views of Snowdonia to the south across the Menai Strait. The Anglesey Coastal Path follows these shores, but the sound between Puffin Island and Penmon Point (or Trwyn Du) remains treacherous. 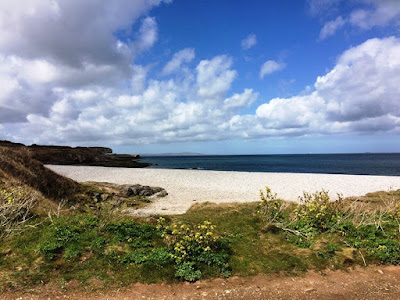 Meanwhile, once I had left Puffin Island behind earlier this week, I realised those Puffin stamps never came from Puffin Island. Instead, as I know now, they came from Lundy Island (Ynys Wair), the largest island in the Bristol Channel, 19 km off the coast of Devon, and about a third of the distance across the channel from Devon to South Wales.

Because of a decline in the population of Lundy Island in the 1920s, the Post Office decided to end its presence on Lundy in 1927.

For the next two years, Martin Coles Harman, who had bought the island and proclaimed himself king, handled the mail to and from the island without charge. In 1929, he decided to offset the expense by issuing two postage stamps – a ½ Puffin in pink and 1 Puffin in blue, with one puffin equal to one English penny.

The printing of Puffin stamps continues and the cost of the Lundy Island stamps covers the cost of postage of letters and postcards from the island to the Bideford Post Office on the mainland. Many are now highly sought-after by collectors, and the market value of the early issues has risen substantially over the years.

Perhaps I should have held on to those Puffin stamps all those years ago. Then I would have known the difference between Lundy Island and Puffin Island before I visited Penmon last Monday.