Reporting the General Synod in
‘The Church of Ireland Gazette’ 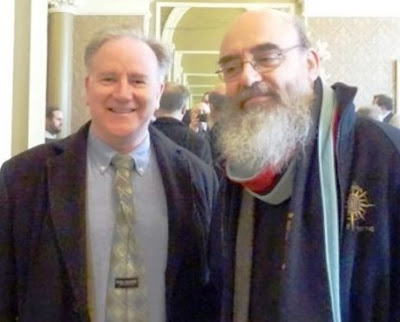 ‘The Church of Ireland Gazette’ this weekend (20 May 2016) carries extensive reports from the General Synod of the Church of Ireland, which took place in the Royal Marine Hotel, Dun Laoghaire, last week, including this photograph on p 8 and this full page report on p 5:

1916 commemorations and plight of refugees
highlighted at Standing Committee debate

The centenary commemorations for the 1916 anniversaries, including the Easter Rising and the Battle of the Somme, and the Church’s response to the refugee crisis, emerged as the two principal concerns during the debate on the report of the Standing Committee.

“The Church of Ireland, as it straddles two political jurisdictions and holds together people of differing political viewpoints in its membership, has a very valuable role to play here,” Archdeacon Adrian Wilkinson (Cork, Cloyne and Ross) told the General Synod.

Archdeacon Wilkinson, who was proposing the report, said “the year 1916 is one etched in the consciousness of all Irish people, whatever their political views. For some, it is inextricably linked to the Battle of the Somme when on the 1st July, the first day of that battle, there were 5,500 casualties from the 36th Ulster Division. Later that year, in a continuation of the same battle, the 16th Irish Division, made up largely of men from the three other provinces, had 4,300 casualties. In the horror of war, men from both traditions in this island, fought supported one another, suffered and died together.”

Referring to the Easter Rising in 1916, he described the way it has been commemorated in schools throughout the Republic, and the national events and many local initiatives organised “to contribute to reflection, discussion, education, debate and commemoration over the past year.”

Turning to the special liturgy written to mark the centenary of the Easter Rising, he said: “The Bidding Prayer included in that service states that ‘in remembering the events of 100 years ago, we the Church are called to give voice to shared suffering, silenced and untold stories, the many and nuanced narratives, bravery and heroism, and commitment to ideals that were underpinned by shared and common aspirations’.”

He predicted “considerable challenges lie ahead” with the anniversaries of events during the Irish War of Independence.”

Pauline High (Connor), who seconded the report, highlighted the work of the Bishops’ Appeal Advisory Committee.

She told synod there had been a general increase in giving for 2015. “However, with an ever increasing seriousness of the current refugee crisis and numerous disasters and emergency appeals requiring our attention there is always room for improvement.”

Bishop Patrick Rooke (Tuam, Killala and Achonry), Chair of Bishops’ Appeal Fund, described the current refugee situation, particularly in the Republic of Ireland, and also spoke of the need for a committee to address urgent needs in Ireland, such as recent floodings.

He pointed to a recent report in the Church of Ireland Gazette by Lydia Monds, the education officer of the Bishops’ Appeal, and her description of offers of accommodation and practical work to help with the refugee crisis in Ireland.

Bishop Rooke spoke of how many refugees arrive psychologically traumatised. They face a slow process, and this has been complicated by delays in forming a new government in the Republic of Ireland, and debates about the Turkey agreement, he said.

But he was encouraged by much that is happening behind the scenes. He reminded Synod that Church groups will be asked to provide hospitality and welcome, and the responses will determine success or failure of the programme.

There are 4,500 asylum seekers in direct provision centres, he said, but they have nowhere else to go.

“The issues are already staring us in the face,” he said. The Government needs to be pressed into action to help asylum seekers, migrants and refugees.

Dean Katharine Poulton (Ossory) spoke of a project in the Diocese of Cashel, Ferns and Ossory to provide wellington boots and shoes for people who had arrived in Co Waterford and who would otherwise not have been able to go for walks on the beach.

She also praised the value of art therapy projects and efforts to the new arrivals to buy clothing. “Think on a local small level,” she said. “Reach out through those who are on the ground.”

Bishop Ken Good (Derry and Raphoe) said 20,000 Syrian refugees are expected to arrive in UK over the next five years. The beginnings have been very, very small, with two small groups of about 50 or so people in each group arriving in Northern Ireland recently.

He described the support offered in pilot projects that he hoped could be replicated throughout Northern Ireland.

Canon Horace McKinley (Dublin) pointed out that many of the reports on refugees concentrate on the crises in Europe and the Middle East. But he also pointed to the high numbers of refugees throughout Africa, Asia and Latin America, and said this is a global problem that is here and is not going to go away.

The Rev Stephen Neill (Killaloe) objected to way same-sex relations were in danger of continuing to be treated as criminal when they are spoken of in the same bracket as trafficking, sexual abuse and domestic violence. This debate re-emerged later in the synod during the debate on the report of Select Commission on Human Sexuality in the Context of Human Belief.

In seconding the report, Mrs High also spoke of the work of the Northern Ireland Community Relations Working Group which keeps a watching brief on community relations issues in Northern Ireland. “At times there are endless opportunities for us to enter the public arena and speak into difficult and often inflammatory situations, to bring God’s grace and love to a hurting world.”

The Standing Committee report ran to 87 pages. Bishop Harold Miller (Down and Dromore) pointed out that most of the report was taken up with appendices, including reports on the Priorities Fund and the Church and Society Commission, as well as charity legislation, stipends and pensions.

In his opening speech, Archdeacon Wilkinson paid tribute to Mrs Eithne Harkness, who stood down as one of the honorary secretaries in June 2015, the new honorary secretary, Mr Ken Gibson, the synod office, Mr Garret Casey, who resigned in September 2015, and his successor, Dr Catherine Smyth. 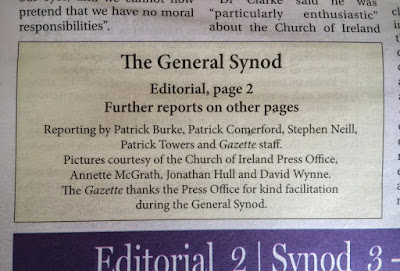