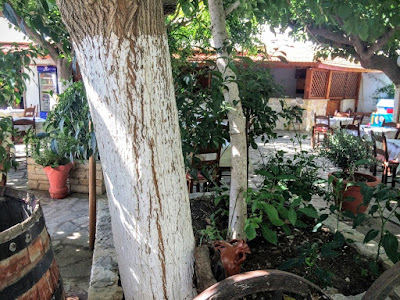 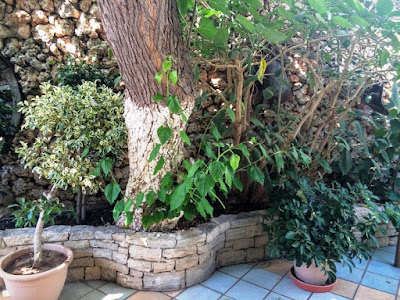 In the Cycladic Islands asvesti or limestone whitewash was introduced as an antiseptic and antibacterial during the Frankish venetian times after the occupation of the Venetians from 1207 onwards , when many cases of leprosy, malaria and cholera caused havoc amongst the population. All the streets and houses were by decree whitewashed and on trees such as orange and lemons this prevented ants and otner climbing insects from attacking the fruit. All over the hills of cycladic islands you can see the remains of the firepits dug out in the rock where they burnt the rough marble stone in order to extract the limestone . When I first came to live on Paros in late 60 s ,limestone was also put down wells to purify the water and these kaminia, firepits were still in use. The coloured houses such as ochre, pinkand yellow came later with the neoclassical architecture in the 1800 s.

Whitewashing the base of trees was a tradition in the rural American South as well. My father told me that people thought it would protect the trees from insects, but as you say about Greece, it was more tradition than anyone really knowing why.