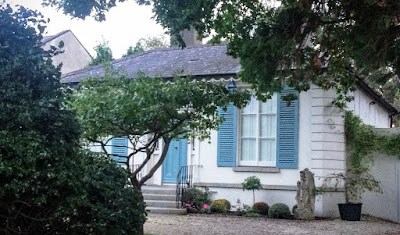 No 114 Rathgar Road is said to be one of the oldest houses in Rathgar (Photograph: Patrick Comerford, 2016)

In his history of Rathgar, Maurice Curtis says that someone of importance lived in practically every house along Rathgar Road. I am familiar with the street and its houses since my childhood, when my uncle and godfather lived on Rathgar Road, and later in the 1970s and 1980s, the Student Christian Movement house at No 168 Rathgar Road was a hub for many initiatives supported by SCM Ireland, including the Campaign for Nuclear Disarmament (CND), Christian CND and Dawn, the nonviolent direct action magazine.

I continue to enjoy walking along Rathgar Road, before or after Church meetings nearby in Rathgar, and many of the houses, which are protected or listed buildings, are getting facelifts as they are transformed from flats and apartments into single-family homes.

One of those houses, No 114 Rathgar Road, which is said to be one of the oldest houses on this road, is currently on the market, and I stopped to look at one evening last week as I was walking home from one of those Church meetings in Rathmines.

This house is a double-fronted Regency-style villa. It was built as a hunting lodge in the 1820s, making it almost 200 years old and one of the oldest houses in Rathgar and in Dublin 6.

The house once stood on several acres, and these grounds were so expansive that Christ Church Presbyterian Church, was built on its grounds on a prominent site at the nearby junction with Highfield Road. The church was opened in 1862. It is said the Church of Ireland first turned down the opportunity to acquire this site for a new suburban parish church.

Over the decades, the house has lost all of this land, although it still has small gardens to the rear, sides and front. The white-painted stone lions sitting atop the walls on either side of the house, over the arched timber doors leading to side passageways, hint at its grand past.

In the 1920s and the 1930s, No 114 was the home of the Atkinson family. Later, the house was known as Mullach Bán, and Maurice Curtis records that it once belonged to members of the Andrews family, an Irish political dynasty.

The house, close to Rathgar village, is tucked away off Rathgar Road behind high griselinia hedging, making it difficult to photograph in the late evening light. But from the street, No 114 Rathgar Road still looks like the imposing period house it once was, with its symmetrical design.

The wide front door and entrance at the top of a short flight of granite steps is flanked by tall windows on either side, each with patined shutters. The front door opens into a hallway that runs from the front to the back of the house. On each side there is a reception room on either side, one used as a formal dining room, the other a living room. Each room has a high ceiling and decorative plasterwork as well as a feature fireplace.

The house is single-storey to the front, and two-storey at the back. There are two double bedrooms up a few steps off the hall, and three smaller rooms downstairs.

The house is now on the market through Douglas Newman Good with an asking price of €1.1 million. 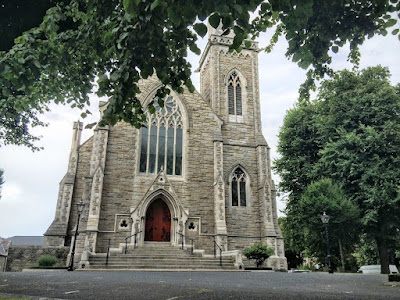 Christ Church, Rathgar, built on grounds that were once part of No 114 Rathgar Road (Photograph: Patrick Comerford)