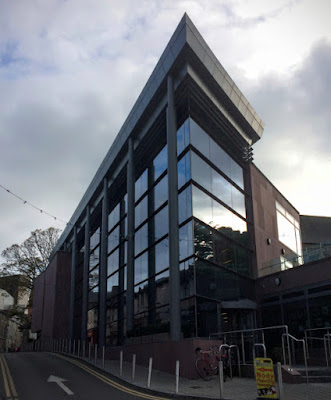 It is almost four years since Brendan Howlin opened the new County Library in Wexford. I once lived just a few steps from this magnificent building when it was a humble car park. But my friend Celestine Murphy, editor of the Journal of the Wexford Historical Society, offered me my first guided tour of the Library while I was in Wexford yesterday [28 October 2016], and showed me the stunning views across the town and out into the Wexford countryside.

It is a striking steel and glass structure on a landmark site. But before it opened, the new library was the subject of some controversy, with critics pointing out that it stands immediately inside Wexford’s old town wall and one of its mediaeval square towers.

But looking down on the walls and its towers, the site of the former Saint John’s Gate and across the town to Selskar Abbey, I was convinced that this bright, light-filled complements the historic features of the townscape. To have left the vacant lot in Mallin Street (Back Street) behind Rowe Street Church would have been poor taste when it comes to urban planning and design.

Planners and local authority figures in Wexford hope the new library will stand at the epicentre of a linear ‘cultural spine’ parallel to Main Street, with the Opera House in High Street, where I lived in the mid-1970s, at one end and Selskar Abbey at the other end, and the new library and the neighbouring Art Centre in Cornmarket forming the core. 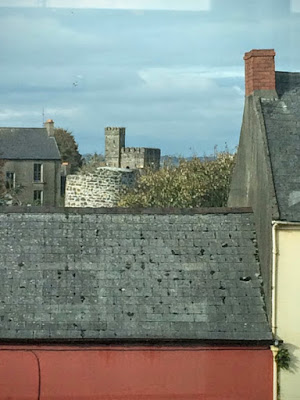 Looking across the roofs of Wexford Town from the Library to Selskar Abbey (Photograph: Patrick Comerford, 2016)

The library replaces temporary premises in McCauley’s car park off Redmond Square. Before that, the library spent some time in what is now the foyer and the Library Bar area in Clayton White’s Hotel, while the Archives and Local Studies section was based across Wexford Bridge in Ardcavan, on the other side of the River Slaney.

Indeed, since it was first established in 1926, the library has moved six times. Wexford Library was originally established as the Book Repository on North Main Street in 1923. In 1928, it moved to Custom House Quay; then in 1934 to the second floor of the then renovated County Hall.

In the 1960s, the facilities relocated to a prefab on the grounds of the County Hall at Hill Street, before moving again to Abbey Street in what is Clayton Whites Hotel and then to premises off Redmond Square.

The library is organised into three zones. The ground floor offers a meeting area, daily newspapers, a print point, express PCs and popular adult non-fiction materials. Family and leisure use is centred on the middle floor which carries the children’s library, teens stock, DVDs, CDs, graphic novels and adult fiction.

The more serious top floor has the e-learning suite, another print point, research services and borrowing stock in economics, enterprise, education, languages, literature, history, Wexford studies and geography. Throughout the building, there is Wi-Fi access.

Mythen Construction was appointed by the National Housing Agency to build this landmark 1,680 sq m public building project. The project was extremely challenging from a technical and logistical perspective as the building took up the entire curtilage of the town centre site. A patio area by the old town wall can be used for book launches and similar events.

This beautiful new library fits in with the narrow street and sits comfortably with the church spire of Rowe Street Church, while the site retains a portion of the old town wall. In 2013, it was shortlisted for the Irish Building and Design Awards.

Close to the new library, a little further along Wexford’s ‘cultural spine,’ the Arts Centre has its home in the Market House in Cornmarket, built by Wexford Corporation in 1772-1776.

The lower windows that can be seen originally today arched recesses for the traders, a reminder of its original use as the town’s market house days. Inside, there was a magnificent ballroom and supper room upstairs.

The founder of the Methodists, John Wesley, preached here when he visited and he recorded in his journal that it was one of the best public rooms he had ever spoken in. Later, the Brunswick Club was formed here in 1882.

Following renovation, the Assembly Rooms as they were also known were a popular venue for lectures and musical evenings well into the 20th century and people such as Percy French, composer of The Mountains of Mourne and other popular songs appeared on a number of occasions.

It became the headquarters of Wexford Corporation in the early 20th century and was known as the Town Hall. It opened its doors as the Wexford Arts Centre in 1974 and has been providing art and has been a cultural centre in the town ever since.

As we looked down on the Market House from the top floor of the library in the sunshine yesterday afternoon, Celestine pointed out that High Street, Mallin Street and Abbey Street provided the Main Street and artery of the old walled town, and offered the opinion that Cornmarket, and nor the neighbouring Bull Ring was the scene for Cromwell’s massacre in Wexford in the mid-17th century.

Ominously, the sign over Con Macken’s Bar, also known as the Cape Bar, includes the words ’Bar,’ ‘Undertaker’ and ‘Spirits’ – harkening back to the day when this pub, linking the Bull Ring and Cornmarket, was a place where many could truly sing, ‘Eat, drink and be merry, for tomorrow we shall die.’ 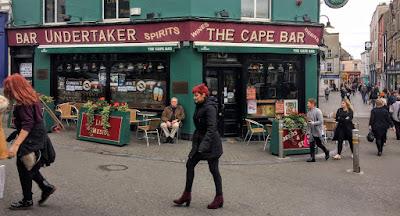 The sign over Con Macken’s Bar in the Bull Ring in Wexford (Photograph: Patrick Comerford, 2016)