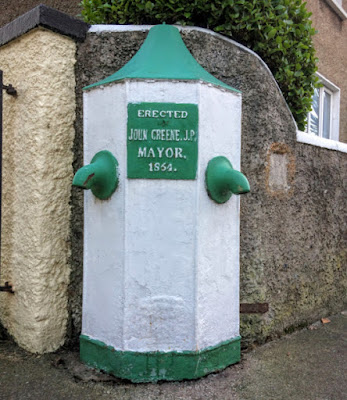 ‘The Cock’ in John Street determines your place in Wexford (Photograph: Patrick Comerford, 2016)

When I first met the late Father Sean Fortune I was deeply disturbed.

I was asked to be an external examiner on a PLC (Post-Leaving Certificate) course in journalism he was teaching in Dublin.

He protested when I decided to be more rigorous and more thorough than most external examiners. In a completely unprofessional way, he entered the room where I was working on my own, and engaged me in personal conversation.

I had never met him before and I had no reason to question his integrity and professionalism. But I was already uncomfortable.

By then I was a senior journalist with The Irish Times and I was not going to be challenged about my professional and academic judgment. But I caught the whiff of a Wexford accent, and with polite curiosity I casually asked which part of Wexford he was from.

He lied to me.

He had no reason to lie to me.

But that morning he told me was from Wexford Town.

At the time, I did not know he was from Gorey in north Co Wexford. I had lived in Wexford Town, on both School Street and High Street.

I asked him which part of Wexford Town he was from.

With a straight face, and looking me in the eyes, he answered immediately: ‘John Street.’

Generations of Comerfords lived on John Street. It is on the other side of the mediaeval walls of Wexford from High Street. They had moved there from Bunclody in the 19th century, and a large chunk of the old town wall separated the back garden of the house I had lived in on High Street from a short stretch of John Street between the Friary and Rowe Street Church. I had lived only a stone’s throw from houses in John Street where members of my own family had lived.

Without realising what I was doing, I quickly retorted, in an immediate and unguarded response: ‘John Street? Above or below the Cock?’

He stared at me blankly.

He had no idea what I was talking about. In retrospect and with the benefit of hindsight, he probably thought I was not only being rude but had some innate insights into his criminal behaviour.

But I knew from his stare he had lied to me. He was not from John Street.

Within a short space of time, the whole tragic tale of Father Sean Fortune would unfold, and he would bring about his own sad demise.

One of the true tests of whether you are from Wexford town is to know whether you from above or below the Cock. The others include whether you can properly pronounce the name of the Faythe, and whether you know about the Gondolas in the Crescent.

Because I had lived on School Street and on High Street, I was told that I was very definitely from below the Cock.

The Cock on John Street determines your identity and your place in Wexford. I had been involved in Wexford Wanderers, the town’s rugby and cricket club. But I knew the Cock decides who you supported in football and hurling – the John Street Volunteers or the Faythe Harriers.

It is a division that goes back more than two centuries to 1798, and the organisation of the John Street Volunteers during the Rising.

On Friday afternoon, I could not resist photographing the Cock in Upper John Street in Wexford. It is a disused wall-¬mounted cast¬-iron fountain, dated 1854, and designed on a half¬-octagonal plan.

The fountain was erected by John Greene, who was Mayor of Wexford in 1854. Long before town planning, streetscaping and public water systems, he had a vision for supplying clean water to the people of the town, raising the quality of life and the standards of living of Wexford’s growing population

He died in 1890, and today the Cock is easy to pass by without noticing.

An old, rusting Victorian post box embedded in the façade of house in John Street, Wexford, close to ‘The Cock’ (Photograph: Patrick Comerford, 2016)

Earlier in the day, as I walked along the Quay in Wexford under a bright blue autumnal sky, the tide was out at the Crescent, and there was more silt than water in this landmark part of the town.

It was the Wexford Festival Opera, and I recalled the apocryphal story of the Wexford town councillor who proposed during an early opera in the 1960s that because an Italian opera was being staged in the Theatre Royal in High Street it would be appropriate to put a gondola in the waters of the Crescent.

Not to be outdone, one of his political rivals got to his feet and asked why two gondolas could not be placed in the Crescent. Then, when the festival was over, they could breed, and we would have generations of gondolas for festivals for generations to come.

A third councillor was quick to ask why go to such expense? Everyone knows if we had two gondolas in the Crescent, he quipped, they would get very friendly and soon fly off to breed in Venice, never to return again.

Wexford still has no gondolas/. But true Wexford people know where to find the cock in John Street. 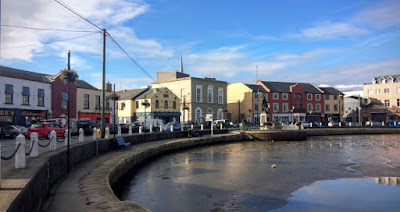 The Crescent in Wexford on Friday afternoon … and not a gondola in sight (Photograph: Patrick Comerford, 2016)

Nice piece, as always, Patrick and you put a Wexfordman to shame by your interest, research and obvious fondness for the subject. My mother was from above the Cock and I have a brother-in-law living very close to it. I was very much from the other end of town near the celebrated Faythe. There are, of course, two pronunciations of the Faythe - the everyday one and the posh one! And you doubtlessly known its origins - St Michael of Feagh, I believe. Tony O'Brien

Really enjoyed this! And yes, two local pronunciations as well as the one out of towners (like me before educated as a summer resident at the People) . I recall Fortune bringing his class into the Independent, where Joe Power asked me to give them a spiel in the library. I was utterly surprised to hear later that Fortune was the leader, as what he knew about newspapers could be written on the top of a pin.