A week that reminds us
of ‘how fragile we are’ 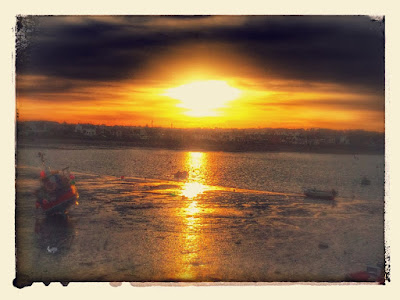 ‘If blood will flow when flesh and steel are one / Drying in the colour of the evening sun’ … sunset at the harbour in Skerries two weeks ago (Photograph: Patrick Comerford, 2016)

Earlier this week, I was writing about one Christmas carol and one Christmas song that I have found myself listening to again and again: The ‘Coventry Carol’ and ‘Stop the Cavalry’ (1980) by Jona Lewie. They have reminded me throughout this Christmas season of both the Ministry of Reconciliation at Coventry Cathedral and my involvement with the Campaign for Nuclear Disarmament (CND) at the height of the Cold War in the late 1970s and the 1980s.

Since then, two incidents have reminded me that we have still not removed the threats of nuclear war and that we still live in a very fragile world.

Donald Trump has stunned the world by appearing to call for a renewed arms race on his Twitter feed and in a TV interview. ‘Let it be an arms race,’ the US president-elect is said to have told Mika Brzezinski, co-host of MSNBC’s Morning Joe programme, in an early phone call yesterday [23 December 2016]. He went on to say: ‘We will outmatch them at every pass and outlast them all.’

Trump’s incendiary remarks follow a tweet on Thursday [22 December 2016] in which he threatened to preside over a major ramping up of the US nuclear arsenal: ‘The United States must greatly strengthen and expand its nuclear capability until such time as the world comes to its senses regarding nukes.’

Meanwhile, 12 people were killed and 56 others were injured in a terrorist attack on Monday night [19 December 2016], when Tunisian-born Anis Amri a truck was driven into the Christmas market near the Kaiser Wilhelm Memorial Church at Breitscheidplatz in Berlin. Anis Amri was killed early yesterday in a shoot-out with Italian police near Milan.

The fears of a new Cold War and nuclear arms race that are being stoked by Trump, before he even takes office, and terrorist attacks on the streets of a European capital in the days before Christmas, and the consequent fears of a new rise of racism and Islamophobia, have reminded me of two songs from the 1980s by Sting, ‘Russians’ (1985) and ‘Fragile (1987).

‘Russians’ was recorded by Sting for his debut solo album, The Dream of the Blue Turtles, released in July 1985, and it was released as a single the following November. The song was released in the final years of the Cold War between the US and the Soviet Union, stoked by the deployment of Cruise, Pershing and SS 20 missiles, and the plans for a new ‘Star Wars’ escalation of the nuclear arms race.

The melody was inspired by the ‘Romance’ theme from the Lieutenant Kijé Suite written by the Russian composer Sergei Prokofiev for the film Lieutenant Kije (1933).

The lead-in includes a snippet from the Soviet news program Vremya in which the Soviet news broadcaster Igor Kirillov says in Russian: ‘...The British Prime Minister described the talks with the head of the delegation, Mikhail Sergeyevich Gorbachev, as a constructive, realistic, practical and friendly exchange of opinions...’ This refers to the meeting between Mikhail Gorbachev and Margaret Thatcher in 1984.

In the background, we can also hear communications from the Apollo–Soyuz mission.

Sting later recalled: ‘In this political climate a friend of mine, who was doing research at Columbia University in New York, had a computer system sophisticated enough to intercept the Soviet’s TV signal from their satellite above the North Pole. On a Saturday night in New York City we could watch Sunday morning programmes for the kids in Russia. The shows seemed thoughtful and sweet, and I suddenly felt the need to state something obvious in the face of all this rhetoric: Russians love their children just as we do.’

Sting’s lyrics ask rhetorically if Russians love their children, too, and question why the Russians and the Americans are taking part in the Cold War.

The song speaks to both sides in the Cold War:

There is no monopoly on common sense
On either side of the political fence.

It describes the thoughts of ordinary people in both superpowers in the early 1980s and protests against the concepts of ‘Mutually Assured Destruction’ (MAD) and of a limited or ‘winnable’ nuclear war:

There’s no such thing as a winnable war
It’s a lie we don’t believe anymore.

It then recounts and rejects the views of both President Ronald Reagan and his proposals for the ‘Star Wars’ initiative:

Mr Reagan says ‘We will protect you’
I don’t subscribe to this point of view.’

But Sting is even-handed – he has already rejected the bellicose views of the Soviet Prime Minister, Nikita Khrushchev:

Mr Khrushchev said we will bury you
I don’t subscribe to this point of view.

‘Little Boy’ was the name of the first atomic bomb, dropped on Hiroshima on 6 August 1945. ‘Oppenheimer’s deadly toy’ refers to Robert Oppenheimer, the American physicist who invented the atomic bomb.

He hopes that the ‘Russians love their children too,’ since this would apparently be the only thing that would save the world from eventual obliteration by nuclear weapons.

Sting originally wanted to record this song in Russia with the Leningrad State Orchestra. However, he told Record in 1985: ‘Unfortunately I came up against the bureaucracy that politicians put in front of you. It’s not easy to get into the Soviet Union to make a record – and it should be.’

The Cold War was in its final years when ‘Russians’ was released. Mikhail Gorbachev became the Soviet leader in 1985, and in 1989, Gorbachev and George Bush snr declared the Cold War over at the Malta Summit. The Soviet Union was dissolved two years later.

In Europe and America,
there’s a growing feeling of hysteria
Conditioned to respond to all the threats
In the rhetorical speeches of the Soviets.

Mr Khrushchev said we will bury you
I don’t subscribe to this point of view
It would be such an ignorant thing to do
If the Russians love their children too.

How can I save my little boy
from Oppenheimer’s deadly toy.
There is no monopoly in common sense
On either side of the political fence.

We share the same biology
Regardless of ideology
Believe me when I say to you
I hope the Russians love their children too.

There is no historical precedent
To put the words in the mouth of the President
There’s no such thing as a winnable war
It’s a lie we don’t believe anymore.

Mr Reagan says we will protect you
I don’t subscribe to this point of view
Believe me when I say to you
I hope the Russians love their children too.

We share the same biology
Regardless of ideology
What might save us, me, and you
Is if the Russians love their children too.

The second song by Sting I am thinking of this Christmas Eve is ‘Fragile,’ which he recorded in 1987 for his second studio album, Nothing Like the Sun, and released as a single the following year. He has also recorded this track in both Spanish and Portuguese.

The song is a tribute to Ben Linder, an American civil engineer who was killed by the Contras in 1987 while he was working on a hydroelectric project in Nicaragua.

The song features in the 1992 Academy Award winning documentary film The Panama Deception, telling the story of the US invasion of Panama in December 1989.

‘Fragile’ was the opening song in Sting’s ‘All This Time’ concert, recorded on the evening of the 9/11 attacks on 11 September 2001. Sting sang ‘Fragile’ last month to open his concert at the reopening of the Bataclan in Paris on 12 November 2016, a year after the 2015 Paris terror attacks.

If blood will flow when flesh and steel are one
Drying in the colour of the evening sun
Tomorrow’s rain will wash the stains away
But something in our minds will always stay.

Perhaps this final act was meant
To clinch a lifetime’s argument
That nothing comes from violence and nothing ever could
For all those born beneath an angry star
Lest we forget how fragile we are.