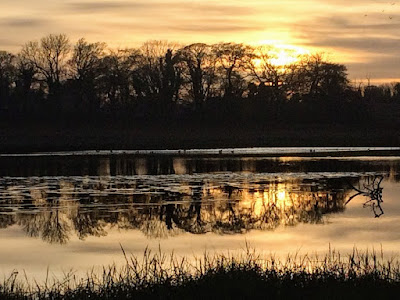 Winter sunset on the banks of the estuary of the River Nanny near Laytown, Co Meath (Photograph: Patrick Comerford, 2016; click on image for full-screen view)

The bright winter days with clear blue skies and startling sunshine have returned after a few rainy days, and in this part of Ireland we are enjoying bright, lengthy sunsets in the evenings. It seems hardly appropriate to be signing about the bleak midwinter, even though we are in the second half of December and close to the shortest day in winter.

We are in the middle of a busy round of Carol services and pre-Christmas visits and dinners. But two of us abandoned the task of writing Christmas cards and wrapping presents early yesterday afternoon [Saturday 17 December 2016] and decided to take advantage of the mid-winter lights by heading north for walks on the beaches in Laytown and Bettystown on the ‘Gold Coast’ that runs the length of East Co Meath.

As we drove through the pretty village of Julianstown, we noticed that Saint Mary’s Church was open. I loved visiting this church when I was at school nearby in Gormanston in the 1960s, and I have preached there in the more recent past. But I had never photographed its interior, and so we decided to turn back.

Inside, parishioners were busy decorating the church in preparation for this evening’s candle-lit Carol Service, and we received a warm welcome as I walked around photographing the interior and the windows. There was a warm welcome too from Canon Stanley Baird, the former Rector of Swords, who is looking after the parish until a new rector arrives in March. 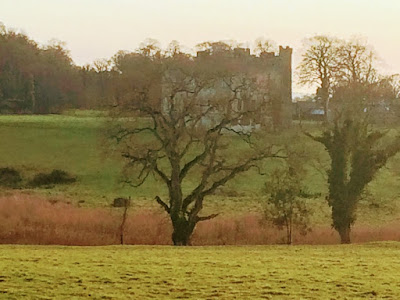 The winter bareness provides views of Ballygarth Castle on the banks of the River Nanny near Julianstown, Co Meath (Photograph: Patrick Comerford, 2016)

Outside, in the late afternoon, the bare branches of the winter trees gave us clear views of the ruins of Ballygarth Castle on the eastern edges of Julianstown. The ruins stand on the banks of the River Nanny and the castle is first mentioned in 1372.

Ballygarth Castle was built over a number of separate building phases. The original three-storey tower house has been enlarged over the years, with a line of crenellations and Gothic details added to the windows.

On the eve of Oliver Cromwell’s attack on Drogheda in 1649, his Parliamentarian army camped on the lawns of Ballygarth Castle.

With the restoration of Charles II in 1660, Ballygarth Castle and the surrounding estate became the property of the Pepper family from Ardee, Co Louth.

The Pepper family supported James II during the Williamite rebellion, and Ballygarth Castle and estate was confiscated once again after the Battle of the Boyne. But this was a temporary setback and the Pepper family managed regained ownership.

The legend of ‘the White Horse of the Peppers’ has been perpetuated in story and later in a play by Samuel Lover, which tells how the confiscated castle and lands were recovered largely through the saga of a white horse belonging to Ballygarth Castle. A white horse was always kept on the estate as a symbol of the family’s gratitude.

For generations, Julianstown was the seat of the Moore family who lived in Julianstown House. The land on which the present village sits was leased to Francis and Mary Thornburgh (née Moore) in 1763 by William Moore.

The land was further subleased to Colonel Charles Pepper of Ballygarth Castle in 1801. In 1856, the Pepper family made this lease perpetual under the legislation of the day and around 1889 the Pepper family built the cottages that can be seen in the village today.

These Swiss Cottages on Main Street form a series of six attractive cottages said to be based on a design that Major Charles Pepper saw in Switzerland. Major Pepper also built cottages in neighbouring Stamullen.

Ballygarth estate is reputed to be the last place in Ireland where oxen were used for ploughing up to 1907. An ox-collar or harness, made by Thomas Oonan of Julianstown, is preserved in the National Museum of Ireland.

Ballygarth Castle remained in the hands of the Pepper family until Colonel Charles Pepper died in 1927.

On the banks of the estuary of the River Nanny near Laytown, Co Meath (Photograph: Patrick Comerford, 2016; click on image for full-screen view)

From the ruins of Ballygarth Castle we drove on towards Laytown, and stopped before the railway bridge where the banks of the River Nanny widen to form a tidal estuary before flowing into the Irish Sea immediately south of Laytown.

The River Nanny flows to Laytown from Kentstown and local folklore says Saint Patrick banished all the salmon from the river. However, the river abounds with wild trout, however, and is stocked with brown trout, which accounts for more than half of the annual catch.

The estuary stretches for about 2-3 km inland and is narrow and sheltered, with muddy sediment. At this time of the year, the estuary provides an important haven for wintering wading birds, protected under the European Union Birds Directive.

During the 19th century, the old village of Corballis on the banks of the Nanny developed into a thriving fishing village. By the end of the 19th century, there were 23 houses and 127 people living there. A schoolhouse was built to cater for the children of the coastguards working in the Coastguard Station nearby.

Many people were employed looking after mussel beds which were laid down in the Nanny estuary, and there was also a little cottage industry, growing willows in the Legberry stream for making potato baskets.

These industries continued until 1937, when the Laytown sewerage scheme was put in place. Earlier, the Coastguard Station was destroyed in the Civil War. With the decline in population there was no longer any need for the school and in recent times the building has been renovated and is now a private house. 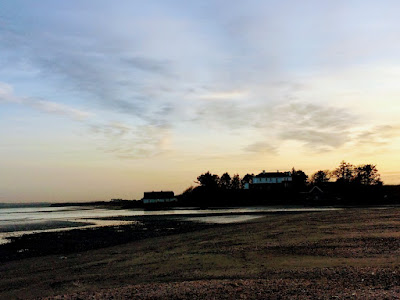 Walking in the late light of the day on the beach in Laytown, Co Meath (Photograph: Patrick Comerford, 2016; click on image for full-screen view)

Having walked along the south banks of the estuary, two of us then continued on to the beach at Laytown, where we walked on the sand as the dusk began to close in.

Dusk had turned to darkness by the time we arrived at Bettystown. In Relish, we were given a table for two at a bay window looking out over the sandbanks and down onto the long stretch of beach, catching glimpses of the waves as we dined. 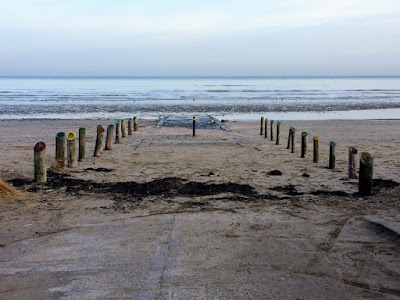 Looking out to the Irish Sea from the beach at Laytown, Co Meath (Photograph: Patrick Comerford, 2016)