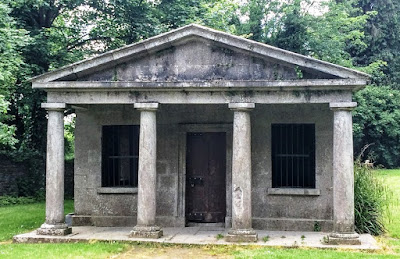 The classical-style gate lodge at the entrance to Townley Hall, where the Revd Willoughby William Townley Balfour was born (Photograph: Patrick Comerford, 2015)

I spent a day earlier this week working in London, at a full-day meeting of the Trustees of the Anglican mission agency, USPG (United Society Partners in the Gospel). At every meeting of trustees, we close by remembering in prayer people associated with USPG who have died since the previous meeting. This week, those we remembered at the end of the day included, of course, the Revd Dr Una Kroll, a former SPG missionary in Namibia, who died last month [6 January 2017], and the Revd Herbert Joseph Edwards, who died in Lichfield at the age of 87 at the end of last year [5 December 2016].

I first met Joe when he was a lecturer at Lichfield Theological College (1968-1971). Later, he was a USPG missionary in the Diocese of Mashonaland in Rhodesia, later Zimbabwe (1971-1980), and in the Diocese of Botswana (1974). I got to know him again in recent years in Lichfield where he lived in retirement in Saint John’s Hospital. We met occasionally in both Lichfield Cathedral, and he was always welcoming in Saint John’s Hospital. He died at Beechfields Nursing Home, Lichfield, and his memorial service was held at Christmastime in the Chapel of Saint John’s.

On the wall behind me in he board room throughout Wednesday’s meeting of USPG trustees were three large stained glass windows, moved from previous premises and depicting saintly SPG missionary pioneers of the past.

I am interested to note that one of predecessors in Askeaton had strongly family links with USPG when it was SPG (the Society for the Propagation of the Gospel) in the 19th century, and another predecessor in Kilnaughtin had been a missionary in Central America for two years and then spent years in Southern Africa as an SPG missionary for seven years.

The Revd Willoughby William Townley Balfour (1801-1888) was Vicar of Askeaton from 1833 to 1837. He was the second son of Blayney Townley-Balfour or Blayney Townley Balfour (1769–1856), who came from a long line of politicians, and who was MP for Belturbet when the Act of Union was passed in 1800. He owned a large flour mill outside Slane, Co Meath, and it was he who commissioned the architect Francis Johnston to rebuild Townley Hall, the family seat on the banks of the Boyne, between Drogheda and Slane.

Blayney Townley-Balfour married Florence Cole, and they had 10 children. Their eldest son, also Blayney Townley-Balfour (1799-1882), was Governor of the Bahamas from 1833 to 1835, while their second son was the Revd Willoughby William Townley Balfour. Willoughby was born in 1801 at Townley Hall, near Drogheda, Co Louth, and went to school at Harrow before entering Trinity College Dublin in 1819. He graduated BA in 1823 and was ordained deacon in 1829 and priest in 1832.

Willoughby Balfour became Vicar of Askeaton in May 1833, and held this post until 1837, when his successor was the Revd George Maxwell, who worked tirelessly and ceaselessly in the parish during the Great Famine.

His elder brother, Blayney Townley-Balfour (1799-1882), was Lieutenant Governor of the Bahamas (1833-1835). He too was born in Townley Hall, and later inherited the family home close to the banks of the Boyne. Townley Hall, is a magnificent Georgian mansion built in 1799 on a hilltop setting. Townley Hall is a masterpiece in the classical style of Francis Johnston, the foremost Irish architect of his day. Today it is surrounded by 60 acres of rolling parkland overlooking the Boyne Valley, close to the site of the Battle of the Boyne.

Sir John Betjeman, in a survey of the works of Francis Johnston wrote: ‘I have seen many Irish houses, but I know none at once so dignified, so restrained and so original as Francis Johnston’s Townley Hall.’

Like their uncle Willoughby, the two Balfour brothers went to school in Harrow, where their younger contemporaries included a future Archbishop of Canterbury, Randall Thomas Davidson (1848-1903), a future secretary of the the Anglican mission agency, the Society for the Propagation of the Gospel (SPG, now USPG), Bishop Henry Hutchinson Montgomery (1847-1932) from Co Donegal, the slum priest Father Robert Dolling (1851-1902) from Co Down, and a much younger Bishop Charles Gore (1853-1932), whose parents were from Ireland.

He was the curate of Buckingham for three years until 1875, and then moved to Southern Africa as a missionary with SPG. He first worked in the Orange Free State, as a bishop’s chaplain, on the diamond diggings with the miners in Kimberley, lecturing in a theological college in Bloemfontein, and as a parish rector and cathedral canon. He then went to Mashonaland in Rhodesia (now Zimbabwe), where he built the first Anglican Church in Fort Salisbury (now Harare).

When Balfour returned to South Africa from Raheny in 1901 he became the Archdeacon of Bloemfontein (1901-1906) and then Archdeacon of Basutoland (1908-1922). When he was consecrated in Cape Town as an Assistant Bishop for the Diocese of Bloemfontein in 1911, he was effectively the first Anglican Bishop of Lesotho.

The Revd James Napier Clarke (1870-1934),who was the curate of Kilnaughtin (Tarbert), Co Kerry), in 1905-1908 after serving with SPG in Southern Africa for about seven years. He was born in 1870, the son of the Revd Dr JW Clarke, and His father, grandfather, great-grandfather, uncle and great-uncle were priests in the Church of Ireland. He was educated at Rathmines School in Dublin.

another SPG missionary in Southern Africa with connections with the Diocese of Ardfert and Aghadoe was Nurse Rosanna (Rose) Blennerhassett (ca 1840-1907). She was a daughter of Sir Arthur Blennerhassett (1794-1849) of Churchtown, near Killarney, Co Kerry. Her uncle and great-uncle were priests in the Church of Ireland, and her brother, Sir Rowland Blennerhassett (1839-1909), was MP for Galway and Co Kerry. She was a nurse with SPG in the Diocese of Mashonaland (1891-1893), and she was the co-author, with Lucy Sleeman, of Adventures in Mashonaland by two hospital nurses (London, Macmillan, 1893).

Which brings me back to Joe Edwards in Mashonaland and in Lichfield, and how glad I am that we remembered him in our prayers at this week’s meeting of USPG trustees in London. Thank you very much for this site, which has added much to my knowledge of Rev Willoughby Balfour. He was a former Rector of this parish where I worship. The full description of the parish at the time that he was Rector was Aston Flamville cum Burbage. There are two churches in the benefice; St Peter's at Aston Flamville and St Catherine's at Burbage. In the 19th century Aston Flamville was the mother church and Burbage a chapel of ease.This changed in the 20th century to make Burbage the mother church and Aston Flamville the chapel of ease. (Burbage has always been a much bigger population centre and we can speculate that the church at Aston Flamville was built on the site of a very old religious centre.
The patron of the living was Earl de Grey and I have found that the Countess de Grey was a close relation of Willoughby.
My very best wishes and God's blessings be with you.