Trinity Church, a forgotten church
in the heart of Georgian Limerick 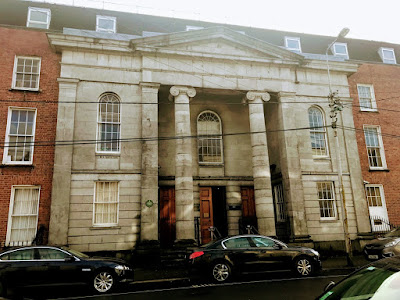 Trinity Episcopal Church was built on Catherine Street, Limerick, in 1834 through the efforts of Edward Newenham Hoare (Photograph: Patrick Comerford, 2017)

Today there are two Church of Ireland churches in Limerick City – Saint Mary’s Cathedral on King’s Island and Saint Michael’s Church on the corner of Barrington Street and Pery Square.

Saint Michael’s Church, which was consecrated in 1844, replaced an older church, Saint George’s on George’s Street, now O’Connell Street, which was founded in 1789.

Saint Michael’s is also known as ‘the sinking church’ as it was not built on bed rock and has sunk ever so slightly over the years.

Saint Munchin’s Church was built as a Church of Ireland parish church in 1827. The architects were the brothers George and James Pain, who built the church in the Gothic style, with four pinnacles at the top of the tower.

Saint Munchin is the patron saint of Limerick. There are many legends about Saint Munchin, who is said to have lived in Limerick in the late seventh century.

Saint Munchin’s Church is on King’s Island, between the Bishop’s Palace and the Villiers Alms Houses. It was built in 1827 and was renovated in 1980 by the Limerick Civic Trust. It was a used for a period by the Island Theatre Company and is now used as a store for Limerick Civic Trust.

Saint John’s Church stands on the site of an earlier church in the Irish town area of the city, which dated from the 1200s. It is located at one end of Saint John’s Square, the first development of Newtown Pery.

The walls around the graveyard were built in 1693 and the present church was built in 1852. The graveyard is the burial place for many Limerick merchant families, including the Russells, who ran the largest mills in Limerick in the mid-19th century.

The church fell into disuse in the early 1970s as the Anglican population of Limerick city declined in numbers. It was transferred to Limerick Corporation in 1975. The interior was completely redesigned and for a period the church was used as a base for the Dagdha Dance Company. It is now the hub for Dance Limerick.

One Anglican church in Limerick that stood outside the diocesan and parochial systems for many years is Trinity Church on Catherine Street. I sometimes pass this former church on my way between buses in Limerick, but it must be easy to pass by without noticing the building because of the way it has been integrated into the streetscape of Catherine Street.

Trinity Church was designed by the architect Joseph Fogerty and was built in 1834 as a chapel for a nearby Asylum for Blind Women through subscriptions raised in Ireland and England by the Revd Edward Newenham Hoare (1802-1877).

Edward Newenham Hoare was a Church of Ireland priest and the author of religious tracts and fiction. His father, Canon John Hoare from Drishane, near Millstreet, Co Cork, was the Canon Chancellor of Saint Mary’s Cathedral, Limerick and Vicar-General of the Diocese of Limerick, and as Rector of Rathkeale (1803-1813) he was one of my predecessors. Edward’s mother, Rachel (d. 1850), was a daughter of Sir Edward Newenham MP.

In the 1830s, Hoare was also the editor of the Christian Herald, and he published a number of sermons too. Around 1831, he first proposed opening a chapel for the blind in Limerick, but his plans were opposed by the then Bishop of Limerick.

But Hoare appealed for subscriptions throughout Ireland and the England, and the new church was built as a place of worship for the adjoining asylum for blind girls and women. 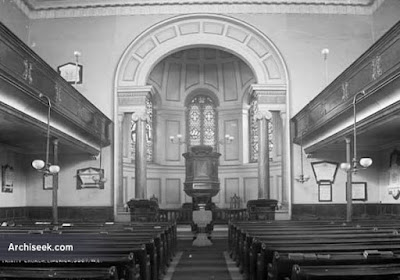 The new classical church was designed by the architect Joseph Fogerty and was consecrated and opened on 4 May 1834. Perhaps it was named after Holy Trinity Church, Rathkeale where Hoare’s father had been rector earlier in the 19th century.

The central building is built entirely of smooth limestone ashlar. It has a recessed central double-height entrance bay with a pair of giant order Ionic columns, flanked by a pair of giant order Doric corner piers, flanked by similar giant order Doric pilasters. These support a plain architrave and frieze. The central recess is surmounted by a pediment forming a shallow breakfront, and continuing as a heavy cornice to either side.

A stringcourse is located at the first-floor level with channel rusticated walls to the ground floor level.

A large round-arched window opening with a panelled apron dominates the first-floor level of the recessed portico, with an arched 10-over-15 timber sash window.

Three square-headed door openings with double-leaf timber-panelled doors are located at the ground floor level of the portico, opening onto a limestone platform and a stylobate of five steps.

The flanking buildings have red brick walls laid in Flemish bond with cement repointing with concrete coping to the rebuilt parapet walls. There is a limestone plinth course at the ground-floor level over painted rendered basement walls.

There are gauged brick round-arched door openings to each building with patent reveals, modern replacement carved timber door surrounds and overlight and panelled doors, dating from about 2000.

A round green plaque placed outside by the Limerick Civic Trust reads: ‘Trinity Church An Episcopal church built in 1834 through subscriptions raised by the personal efforts of the Venerable Edward Newenham Hoare.’ 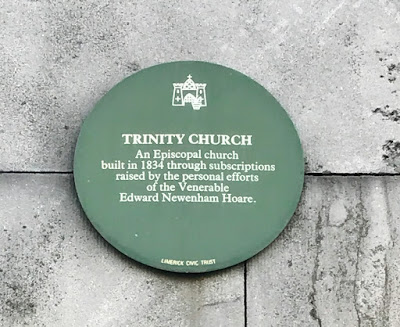 Edward Newenham Hoare gave his name to Newenham Street in Limerick. He was Archdeacon of Ardfert (1836-1839), and was later Dean of Achonry Cathedral from 1839 to 1850, and Dean of Waterford from 1850 until his death.

His first wife was Louisa Maria O’Donoghue from Portarlington, and their children included Revd John Newenham Hoare of Muckross and Revd Edward Newenham Hoare, Rector of Acrise, Folkestone, Kent. In 1859, he married his second wife, the twice-widowed Harriet, daughter of Colonel George Browne.

Hoare died in Upper Norwood, London, on 1 February 1877 and he is commemorated by a plaque in Christ Church Cathedral, Waterford.

Hoare’s church was designed by the Limerick-born architect and builder Joseph Fogerty (1806-1887) who had a lucrative practice in the city. He was born into a family of builders working from Saint John’s Square in 1824 and from Newtown Pery by 1840, and was baptised in Saint Mary's Cathedral on 9 March 1806.

His other works included the Theatre Royal in Henry Street (1841) Leamy’s Free School (1841-1845), a Tudor Revival building on Harstronge Street, and several houses in Limerick, and he worked in partnership with his son Robert Fogerty (1843-1917) from offices in Henry Street until his death in 1887.

A stained-glass window of ‘Christ healing the Blind’ was placed in the church in 1877 in memory of late William Franklin, manager of Provincial Bank, ‘who took deep interest in the Blind Asylum connected with the church.’

Joseph Fogerty’s son, Robert Fogerty, removed the old gas fittings in 1895 and designed extensive alterations and improvements to the church, including new art metalwork, brass light fittings and a new lectern. The church reopened on 7 November 1895.

The building has been in government use since the 1960s, when the church was converted to office use on behalf of the local health board. The building is now used by the Health Service Executive (HSE).

The interior of the building was gutted around 2000, when the galleries were removed and an attic-storey added to all three structures. There is a flat roof with an artificial slate mansard front and sides with lead covered dormers containing uPVC windows.

The cut limestone centrepiece and the two flanking former houses appear to have been radically altered in recent years. But this set of three buildings on Catherine Street remain a fine architectural composition and they form a pleasant aspect in this intact streetscape in the heart of Limerick. 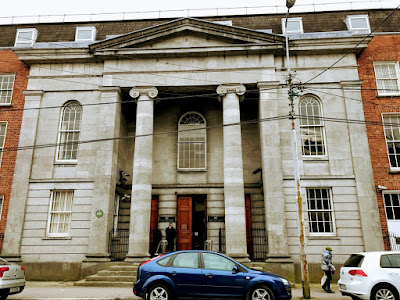