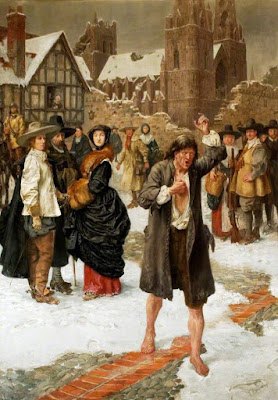 The Bishop of Limerick and Killaloe, the Right Revd Dr Kenneth Kearon, has issued a Lent Challenge to this diocese. The challenge is to use a form of Daily Prayer every day during Lent this year [2017]. In the diocesan magazine, Newslink, he has provided an order for Daily Prayer, together with Daily Readings and Collects.

We are invited to find a quiet time each day in a comfortable chair, to pray and to read a Bible reading, either alone or with someone else.

The challenge began on Ash Wednesday [1 March 2017], with the lectionary reading for that day (Matthew 6: 1-6, 16-21), and has continued each day since, with readings from Saint John’s Gospel.

I have invited parishioners to the Rectory in Askeaton, Co Limerick, each Monday evening in Lent, to look at the bishop’s suggested Bible reading for that day, and to pray using his suggested form of prayer.

14 About the middle of the festival Jesus went up into the temple and began to teach. 15 The Jews were astonished at it, saying, “How does this man have such learning, when he has never been taught?” 16 Then Jesus answered them, “My teaching is not mine but his who sent me. 17 Anyone who resolves to do the will of God will know whether the teaching is from God or whether I am speaking on my own. 18 Those who speak on their own seek their own glory; but the one who seeks the glory of him who sent him is true, and there is nothing false in him.

19 “Did not Moses give you the law? Yet none of you keeps the law. Why are you looking for an opportunity to kill me?” 20 The crowd answered, “You have a demon! Who is trying to kill you?” 21 Jesus answered them, “I performed one work, and all of you are astonished. 22 Moses gave you circumcision (it is, of course, not from Moses, but from the patriarchs), and you circumcise a man on the sabbath. 23 If a man receives circumcision on the sabbath in order that the law of Moses may not be broken, are you angry with me because I healed a man’s whole body on the sabbath? 24 Do not judge by appearances, but judge with right judgment.”

25 Now some of the people of Jerusalem were saying, “Is not this the man whom they are trying to kill? 26 And here he is, speaking openly, but they say nothing to him! Can it be that the authorities really know that this is the Messiah? 27 Yet we know where this man is from; but when the Messiah comes, no one will know where he is from.” 28 Then Jesus cried out as he was teaching in the temple, “You know me, and you know where I am from. I have not come on my own. But the one who sent me is true, and you do not know him. 29 I know him, because I am from him, and he sent me.” 30 Then they tried to arrest him, but no one laid hands on him, because his hour had not yet come. 31 Yet many in the crowd believed in him and were saying, “When the Messiah comes, will he do more signs than this man has done?”

This evening’s reading begins naturally at verse 14. In the immediate verses before this passage, Jesus’ brothers (see Mark 6: 3, where they are named as James, Joseph, Judas and Simon), challenge him to declare himself to the world by joining them and the pilgrims at the feast, where people are looking for him, asking: ‘Where is he?’ (verse 11).

Some people are saying Jesus is a good man, others are saying he is leading the people astray (verse 12), but no-one is speaking openly. His claims (discussed in Chapters 5 and 6) must be verified in Jerusalem.

The feast being celebrated is the Feast of the Tabernacles or Festival of Booths (Sukkot), which usually takes place around late September or in October (see Leviticus 23: 33-36; Deuteronomy 16: 13-15). It marks the end of harvest time, and is one of the three Pilgrimage Festivals, along with Passover and Pentecost.

Despite the urgings of others, and despite saying ‘I am not going up’ (verse 8), Christ travels in secret to Jerusalem (verse 10), and this secret journey might be compared with a later public journey (see John 12: 12-15).

Unlike, the first two journeys to Jerusalem, this next one we are reading about this evening is in secret. Apart from the fact that Christ knows that people are plotting to kill him, the reasons for this journey being secret are found in verse 8 (‘my time has not yet fully come’), compared with the reasons for his next journey being public (see 12: 23, ‘the hour has come’).

On the fourth day of the festival (‘about the middle of the festival,’ verse 14), Christ arrives in the Temple and begins to teach. But we are not told here what was the content of his teaching on that day. Instead, we are told about the reactions to his teaching.

People begin to marvel and to ask where the authority of Jesus to teach comes from, because he has not been trained in a recognisable or official rabbinical school (verse 15). This is similar to the reaction to Jesus in the synoptic Gospels when he teaches in the synagogues (see Matthew 7: 28-29; Matthew 13: 54; Mark 1: 22; Mark 6: 2; Luke 4: 22, 32).

Is Christ merely offering his own opinion? Is he competent to teach? Jesus’ teaching comes from the Father, not from himself, a fact that can be recognised by anyone who wishes to do God’s will (verse 17).

The law of Moses condemns their desire to kill Jesus for healing on the sabbath (5: 18), for it enjoins circumcision, even when the eighth day falls on the sabbath (Leviticus 12: 3), why should not healing not take place on the Sabbath too?

First Jesus’ authority to teach has been challenged. Now the possibility that he is the Messiah is denied because people know his origins is known, whereas it was believed at the time (according to Justin, the rabbinical sources and apocalyptic writings) that the Messiah’s origins would be mysterious, and that he would not be known until he was anointed by Elijah.

Everyone knows where Jesus is from, and who is family are. His human origin is apparent, but not his true origin in God, by whom he was sent and whose authority he bears.

The chief priests (Sadducees) and the Pharisees were polar opposites and inveterate enemies. But here they unite in sending the Temple police to arrest Jesus. This leads Christ to speak of his death.

But Jesus says that later, when people will seek deliverance in the Messiah, they will not find him, for he will have ascended to where they cannot come because they are unbelievers (contrast 8: 21 with 12: 26 and 17: 24).

They miss the point about where he is going. Instead they speculate about whether he is going to the Jews dispersed among the Greeks (the Gentiles), the Diaspora.

For seven days during this Festival, water was carried in a golden pitcher from the Pool of Siloam to the Temple as a reminder of the water from the rock in the desert (see Numbers 20: 2-13), and as a symbol of hope for the coming Messianic deliverance (Isaiah 12: 3).

There is a reminder too of yesterday’s Gospel reading (John 4: 5-42), when Jesus says on the last day of the festival: ‘Let anyone who is thirst come to me.’

He is the true water of life, who turns symbols into reality (Isaiah 44: 3; 55: 1). Believers become channels of life to others, through Christ's Spirit given at Pentecost after he was glorified (crucified, risen, ascended). The gift of the Spirit is a mark of the Messianic age (Joel 2: 28-29; Acts 2: 14-21).

And this evening’s readings leads us naturally to the reading next Sunday (John 9: 1-41), and the story of a man born blind who receives sight.

The passage ends with a series of unanswered questions about Jesus: what are his intentions, where is he going, what does he mean?

They really do not understand who Jesus is. But then, neither did his brothers in the verses before this passage.

Who do we say Jesus is for us today?

We may see the difference between how John, near the end of his ministry, describes Christ, and how the disciples, at the beginning of answering Christ’s call, describe Christ.

George Fox, the founding Quaker, challenged his contemporaries: “You may say Christ saith this, and the apostles say this, but what canst thou say? Art thou a child of the Light and hast thou walked in the Light, and what thou speakest is it inwardly from God?”

It is a question that challenges Saint Peter later in Saint Matthew’s Gospel (see Matthew 16: 15, which is part of the reading on 24 August 2014, the Tenth Sunday after Trinity, Matthew 16: 13-20). Not who do others say he is, but who do you say Christ is?

Next Bible Study: Monday, 3 April 2017.
(Revd Canon Professor) Patrick Comerford is Priest-in Charge, the Rathkeale and Askeaton Group of Parishes. This essay is based on notes prepared for a Lenten Bible study in Askeaton Rectory on Monday 20 March 2017.