Irish Protestants in
2017: Far from the
stereotypically aloof,
rich Anglophiles...

This four-page feature was published in The Irish Independent Review on Saturday 16 April 2017:

Irish Protestants in
2017: Far from the
stereotypically aloof,
rich Anglophiles...

The census shows the Church of Ireland population has dropped slightly – after steady increases in recent decades. An influx of immigrants and disenchanted Catholics has helped steady the ship. In the second part of our series on faith, Kim Bielenberg reports on a more assertive Protestant community 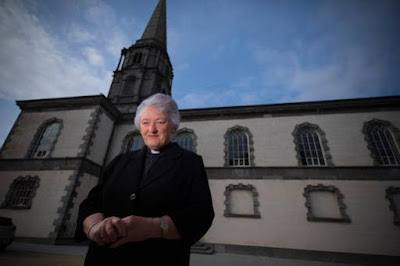 There are still plenty of stereotypes about Protestants in Ireland. Many of them grew up being told that they were not Irish enough.

There is an assumption that they must be rich and live in big houses, and there is even a belief in certain quarters that southern Protestants pay homage to the Queen of England.

They are also said to be accomplished at home baking and jam-making, and skilled at growing daffodils and making meals from meagre leftovers.

The Rev Patrick Comerford, Church of Ireland parish priest in Rathkeale, Co Limerick says: “I don’t think the stereotypes are as strong as they once were, but sometimes they are perpetuated by RTÉ.

“When they cast a Church of Ireland figure in a TV programme they always have a plummy Anglo-Irish accent, like George or the rector’s wife in Glenroe.”

The priest says that in reality most of his parishioners have accents and jobs no different to those of their Catholic or non-religious neighbours. The backbone of the community in rural parishes is typically made up of small farmers, shopkeepers and people with a wide variety of backgrounds.

The latest census shows a slight drop in the number of people declaring themselves as Church of Ireland. Numbers have fallen by 2 per cent to 126,000 over the past five years, but leaders of the biggest Protestant denomination are hardly likely to panic.

The Church of Ireland has suffered calamitous falls in its population before. In the 26 counties in the late 19th century, there were 340,000 members of the church, but by the early 1980s the population had fallen to 95,000. It then started to recover.

Since the 1950s there have been hundreds of closures of Protestant churches across the country. But a number of influences have helped to steady a ship that was in grave danger of sinking.

An increase in the number of Protestant immigrants, particularly from Africa and India, has helped to re-energise some parishes, and there has also been an influx of worshippers who grew up as Catholics.

One parishioner from Lucan estimates his local church-going population as 50pc traditional Church of Ireland, 25pc African or Indian, and 25pc people who were baptised as Catholics.

“There are a number of people from a Catholic background who feel more comfortable in the Church of Ireland at the moment, but I would not see this as a form of competition,” says Patrick Comerford.

The Church of Ireland is facing some similar challenges to the Catholic church. There is an enormous legacy of buildings that have been handed down through generations. The clergy have to try to maintain them, and more importantly, fill the pews.

Priests, many of whom have second jobs, have to cover sprawling groups of parishes over large areas, and in some of the churches the attendance is tiny.

As a priest on the Iveragh peninsula in Kerry, the Rev Michael Cavanagh covers an area from Kenmare to Waterville and Valentia Island. He says at some services in the winter, only four people might show up at some of the services.

“I still think it is very important that we do those services, because it means so much to the parishioners,” says the priest, who grew up as a Catholic before becoming an Anglican in his early twenties.

Like the other well-established churches, the Church of Ireland could have been accused of a certain complacency in the past.

It was unwilling to go out there and compete aggressively in the marketplace for the souls of the faithful.

But Canon Ian Ellis, editor of the Church of Ireland Gazette, says the traditional churches are less complacent now.

“As they see themselves less at the centre of things, the more aware they are becoming of the need to reach out.”

Overall, attendance figures in the Church of Ireland are estimated at 15pc. Just as there are ‘à la carte Catholics’, there are also ‘à la carte Protestants’.

Like the Catholic church, the church has a huge contingent who only attend for big family events, having been educated at Protestant schools.

Ronan Scanlan, an IT consultant who organises scripture readings at the church in Enniskerry, Co Wicklow says: “For christenings, weddings and funerals, and at Christmas and Easter, the church is bursting at the seams. But for the rest of the year these people are nowhere to be seen.”

Numbers at church on a Sunday may be small in many parishes, but the Bishop of Limerick Kenneth Kearon believes the flock that does turn up regularly is perhaps stronger in its faith.

“People are less likely to go to church purely for social reasons, as they often did in the past,” says the Rt Rev Kearon.

“There may be fewer going but they are more committed. That commitment shows itself in Sunday worship, but also increasingly in daily bible study and regular prayer.”

Patrick Comerford says there are still parishioners who grew up with the idea that you should pray at the start and the end of the day.

He says prayer is less formal than it used to be, and the saying of Grace before meals is not as common as it once was. But there is still a strong faith. He says groups of worshippers have turned out every night in small parishes in his area during Holy Week.

In the Church of Ireland, we see ourselves as Catholics too’

“You would get a dozen people in these parishes who would rather come to church in Holy Week than sit at home watching Coronation Street or Eastenders.”

As the country has become more secular, Christian churches have discovered that they have more in common.

Kenmare priest Michael Cavanagh says there is now a superb ecumenical relationship between the churches. In his area, Christians of all denominations get together for bible study.

The main Protestant church, the Church of Ireland has tended to identify with the other main reformed churches, the Presbyterians and Methodists.

The Presbyterian population, which has also fallen in the census, is clustered along the border in Donegal, Cavan and Monaghan.

Patrick Comerford likes to emphasise the close similarities between the Church of Ireland and the Catholic church.

The Rathkeale priest says: “In the Church of Ireland, we see ourselves as Catholic too.

“We are both Catholic and Protestant, we confess the same Creeds – the Nicene Creed and the Apostles’ Creed. We are not a different faith, and we do not see ourselves as having broken away from Catholicism.”

In the decades after independence, there was a perception that Protestants kept their heads down and quietly got on with business.

But in recent decades, the community has been much more assertive in public life. In politics, prominent Protestants have included David Norris, Ivan Yates, Jan O’Sullivan and Heather Humphreys, who is a Presbyterian.

U2 was conceived in a Protestant school, Mount Temple. Two band members, Adam Clayton and the Edge, are from a Church of Ireland background, while Bono’s mother was also Protestant.

Fifty years ago Protestants may have led separate lives, but that is no longer the case. Patrick Comerford says: “There is now an acceptance that this is our State and we are responsible for it just as everybody else is. We play our part.”

In 1957, the marriage of a Catholic and Protestant in Fethard-on-Sea, Co Wexford, caused social unrest – and a priest-led boycott of local Protestant business. It’s a notorious sectarian incident that is still talked of today, but not all of those in ‘mixed marriages’ experienced such problems.

Maria Jansson’s Swedish Lutheran father and Donegal Catholic mother married that very decade and theirs was a union that attracted no animosity. The family moved to Cork when she was eight and she remembers going to Mass every Sunday while being acutely aware of her father’s staunch Protestantism. “There was no alcohol in the house, card games,” she says. “We kept our heads down.”

Since her school days she was intrigued by both philosophy and religion and her becoming a religion teacher was a perfectly natural career move. She taught at schools in Cork and Dublin.

Although she had been raised Catholic, she found herself drawn more to the Protestant tradition, especially when she started attending Christ Church Cathedral, Dublin, in the 1980s. “But the prospect of being a priest wasn’t in my head at all,” she says, recalling how her father, though devout, had little time for clergy.

A life of academia beckoned, but the sudden deaths of two close family members within six months of each other caused her to reassess her life. Ministering in the Church of Ireland would give her true purpose, she believed, and with women priests part of the Church since 1990, there was no longer a gender impediment.

“It has been a great joy,” she says. “You meet so many people who inspire you, especially older people who have great wisdom. It’s almost as though they are ministering to me.”

But the hours are punishing. “I’d do 60 hours a week quite easily,” she says, “but in the past it used to be up to 100 hours. You have to cut back on that because it’s so detrimental to your health” – she suffered a stroke a few years ago – “and you need the head space too. You really have to look out for yourself.”