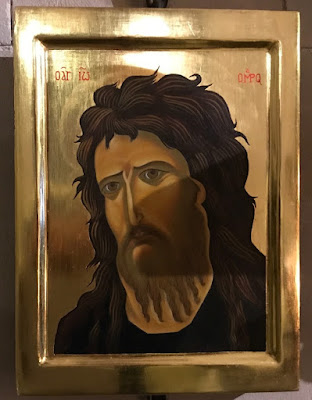 An icon of Saint John the Baptist by Adrienne Lord in the current icon exhibition in Christ Church Cathedral, Dublin (Photograph: Patrick Comerford, 2017)

The Second Sunday after Trinity,

The Festival of the Birth of Saint John the Baptist (24 June, transferred)

It is good for a priest to be present at the Eucharist and to preach on the anniversary of ordination. I was ordained priest 16 years ago yesterday (24 June 2001), and ordained deacon 17 years ago today (25 June 2000). These anniversaries coincide with the Festival of the Birth of Saint John Baptist (24 June), one of the few birthdays of a saint commemorated in the Book of Common Prayer (see pp 20-21), which suggests that festivals like this ‘may be observed on the Sunday.’

I have just completed 15 years teaching and preparing students at the Church of Ireland Theological Institute for ordination. But my own path to ordination began when I was a 19-year-old, 46 years ago, back in the summer of 1971, in a chapel dedicated to Saint John the Baptist.

Frankly, I was more interested in an evening’s entertainment when I stumbled in that chapel out of curiosity. Not because I wanted to see the inside of an old church building chapel, but because I was attracted by the architectural curiosity of the outside of the building facing onto the street.

I could walk away dismissively, asking: ‘So what? God loves me, but so what?’

But my first reaction was to make my way on down John Street, up Bird Street and Beacon Street and Lichfield the Cathedral. There I slipped into the choir stalls, just in time for Choral Evensong.

It was a tranquil and an exhilarating experience, all at once. But as I was leaving, a residentiary canon shook my hand. I think it was Canon John Yates (1925-1980), then Principal of Lichfield Theological College (1966-1972). He amusingly asked me whether a young man like me had decided to start going back to church because I was thinking of ordination. 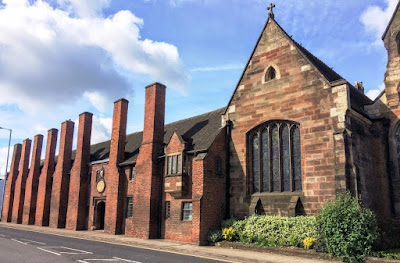 I return regularly, two, three or more times a year, and slip into that chapel quietly when I get off the train. That chapel has remained my spiritual home. I had started coming to Lichfield as a teenager because of family connections with the area. But the traditions of that chapel subtly grew on me and became my own personal form of Anglicanism; and the liturgical traditions of the cathedral nurtured my own liturgical spirituality.

I now know that the evening sun does not fill that chapel with light. That Thursday evening was many years before a famous window by John Piper was installed. But there is no West Window, and that chapel is never filled with evening light, even on summer evenings.

Yet that moment is a lived and living moment … not only in my memory but in my every day, all through my life.

Was this a moment I was looking for? Not really.

Was this a moment I was being prepared for? Perhaps.

Sometimes we find ourselves called out into the wilderness, like those called to hear the voice in the wilderness in our reading from Isaiah this morning (see Isaiah 40: 3), or like the crowd who come to see Saint John the Baptist in the river, and find instead we are called to repentance and the new life poured out on us in the light and the love of God that Christ offers us.

In our New Testament reading this morning (Galatians 3: 23-29), the Apostle Paul reminds us what we were like ‘before faith came … imprisoned and guarded.’

That bright summer evening certainly freed me and left me open to the world, with all its beauty and all its problems.

So, you might say, that is all well and good for you. But has this anything to do with this parish, our lives here in this place?

I appreciate that in Anglicanism at the moment – not only in the Church of England and the Church of Ireland, but throughout the world – we are exploring what mission theologians call a ‘mixed economy.’

But Alison Milbank and Andrew Davison, in their study For the Parish: A Critique of Fresh Expressions (London: SCM, 2010), point out that a major flaw in this ‘mixed-economy ecclesiology’ is the danger of separating form and content, practices and belief.

There is a danger of giving priority to fashion and to individualism, and of losing sight of communion and community. There is a danger that what is fashionable today will be forgotten tomorrow. ‘The grass withers, the flower fades; but the word of God will stand for ever’ (Isaiah 40: 9).

But the traditional witness, faithful life and quiet, stable and steady presence of parishes and churches like this must never be under-estimated or under-valued.

Our churches in this group of parishes stand as a constant witness, across the centuries and down the generations. Like Elizabeth and Zechariah, into their old age, these places have been faithful, steady, constant witnesses … in maintaining liturgical worship, in steady attention to the word of God, in working at loving care and hospitality.

Elizabeth and Zechariah could never see what their steady, faithful witness would lead to, and their neighbours’ response is marked by doubts and scepticism. They would never live to see the consequences of their faithfulness. Saint John the Baptist goes off into the wilderness, and is lost sight of for a while. And even when he begins his ministry, that is not what is important.

We may never fully realise what you are achieving today. But we are inviting countless, unseen generations into the light and love of God – and to see the connection between the love of God and the love of our neighbour.

As Alison Milbank and Andrew Davison point out, ‘to become a Christian is to cease to be an atomized individual but to enter the life of communion. To know God … is to love one another’ (p 133).

Like Saint John the Baptist, the presence of our four churches in this group of parishes is not to be dismissed as a presence in some sort of wilderness, is not to be dismissed because of the numbers who come or do not come here, but is a presence that constantly points to the light and love of God, and is a challenge to all around us to realise that to know God means that we must love one another.

(Revd Canon Professor) Patrick Comerford is Priest-in-Charge, the Rathkeale and Kilnaughtin Group of Parishes. This sermon was prepared for Sunday 25 June 2017.

In the saints
you have given us an example of godly living,
that, rejoicing in their fellowship,
we may run with perseverance the race that is set before us,
and with them receive the unfading crown of glory.

Merciful Lord,
whose prophet John the Baptist
proclaimed your Son as the Lamb of God
who takes away the sin of the world:
grant that we who in this sacrament have known
your forgiveness and your life-giving love,
may ever tell of your mercy and your peace;
through Jesus Christ our Lord. 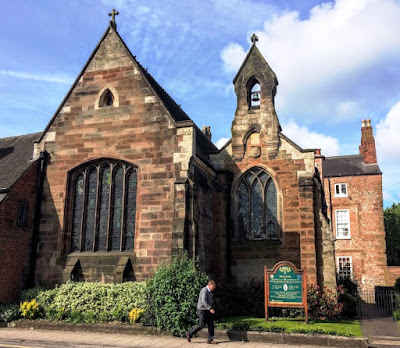