Back in Athens after
11 years for a city break

A view of the Acropolis from the apartment on Karaisaki Street in Athens (Photograph: Patrick Comerford, 2017; click on image for full-screen view)

I am taking a short city break in Athens, thanks to a very generous present last Christmas. I am spending the next three days in a fifth-floor apartment on Karaisaki Street in the Psiri area, only five minutes walking distance from Monastiraki metro station, and close to the Acropolis.

I travelled on an early-morning Ryanair flight from Dublin and arrived in Athens late at lunchtime.

I have been in Greece, on average, three times every two years since the 1980s, and this is my third time in Greece in the space of 13 or 14 months, including holidays in Crete in June and July. But this is my first visit to Athens since 2006.

I first visited Athens in 1989, and when I was working as a journalist I was a regular visitor to Athens, sometimes visiting the Greek capital twice a year, writing for The Irish Times on political, cultural and religious life.

Later, I visited Athens for family reasons, to research the lives of Irish Philhellenes, and during stopovers on visits to Church and mission projects in Egypt. Later still , I even contributed to the late-lamented Athens News in 2009 before it closed in 2012, and from Rethymnon in 2013 to EnetEnglish, a division of the Athens-based newspapers, Eleftherotypia (Ελευθεροτυπία).

A lot has changed since 2006. I have booked a visit to the new Acropolis Museum tomorrow morning, and a walking tour of the Acropolis, all within walking distance of the apartment.

Although this is supposed to be a city break, I hope to see at first-end the effects of the Greek economic crisis on the streets of Athens, to see the work of Canon Malcolm Bradshaw and the parishioners of Saint Paul’s Anglican church on Athens with refugees, migrants and asylum seekers.

I am also conscious, with the ugly displays of the far-right on the streets of America in the past week, that this year marks the fiftieth anniversary of the coup that brought an end to democracy in Greece and brought the colonels to power in 1967 with the active intervention of the CIA and American might.

I am thinking this evening of the heroic resistance of political, artistic, musical and literary figures who stood up fascism in their own country and responded to the moral compunction to take a stand at great personal cost.

Later this year, the great Greek singer Maria Farantouri (Μαρία Φαραντούρη) celebrates her 70th birthday on 28 November 1947. She was one of the many notable voices that was active against the junta (1967-1974), when she worked with Greek composers such as Mikis Theodorakis, and poets such as George Seferis.

During the weekend, I may also get to see two streets in central Athens names after two Irish Philhellenes. Despite its spelling, Tzortz Street (Οδός Τζορτζ), often transliterated as George Street, is named after Sir Richard Church from Cork, who was commander-in-chief of the Greek army and a senator. This street is off Akadimias Street (Οδός Ακαδημίας) close to Omonia and the Polytechnic.

Eduardo Lo Street, off Panepistimiou Street (Οδός Πανεπιστημίου, ‘University Street’), is named after Sir Edward Law, who was born in Rostrevor, Co Down, and spent his childhood in Dublin. He was the Greek Finance Minister in the late 19th century is credited with rescuing Greece from one of its early economic crises.

I am also a short distance from Richard Church’s house in Adrianou Street in the Plaka, on the northern slopes of the Acropolis, from his grave, and from Saint Paul's Church, where there are windows and memorials dedicated to his memory.

I am thinking of having dinner somewhere in the Plaka this evening. Join me over the next few days as I walk around the streets of Athens and get to know the city again. 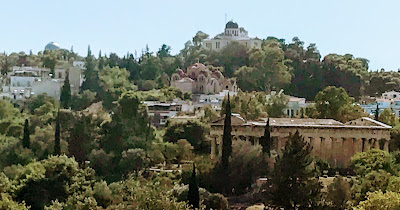 A view of ancient Athens from the apartment on Karaisaki Street (Photograph: Patrick Comerford)