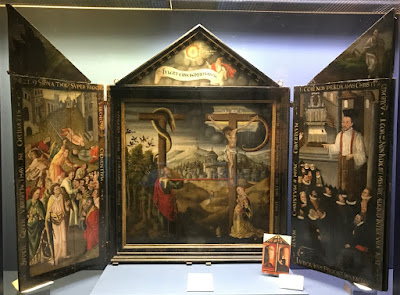 The Dutch Triptych in the Hunt Museum dates from about 1611 (Photograph: Patrick Comerford, 2017)

During my recent visit to the Hunt Museum in Limerick, two late mediaeval paintings caught my imagination because their vibrant colours and because they both appear to display the influence of the tradition of icons on art in Germany and the Netherlands in the 16th and 17th centuries.

A painting of Saint Sebastian, Saint Nicholas of Myra and Saint Anthony of Egypt was originally part of a late-medieval German altarpiece, while a Dutch Triptych dates from some time after 1611.

The Dutch Triptych in the Hunt Museum is a wooden polychrome triptych that dates from ca 1611, and consists of three panels that are hinged together with painted scenes.

When the triptych is opened, it reveals three scenes. The centre panel shows a crucifixion scene with Moses and Mary Magdalen. The panel on the left shows a scene from the Book of Ezekiel, a massacre and an angel marking the foreheads of those to be saved with a Tau cross. The panel to the right shows a priest preaching a sermon.

There are further scenes above these three panels. The first Christian Emperor Constantine, seen in the centre, was probably placed here because he and his mother are attributed with the discovery of the True Cross. The panel on the left shows Saint Anthony of Egypt with a pig. The panel to the right shows Saint Thomas.

The inscriptions around the edges of the central panel in Latin and Dutch. These read, in part: ‘The cross of Christ, the safe defence for weeping men, and the sadness of all man by the help of the cross of Christ.

When the triptych is closed, it shows a priest kneeling in prayer in front of a crucifix. Other scenes show the three Kings following the star of Bethlehem and a scene from the Agony in the Garden with an angel overhead.

The inscription on the front panels reads: ‘God forbid that I should glory, save in the cross of our Lord Jesus Christ’ (see Galatians 6: 14). A phrase of a hymn is being uttered from the mouth of the priest: ‘Hail oh Cross our only hope.’

Objects like this were hung in side chapels. This triptych was made in wood in the Netherlands and was probably displayed in Craggaunowen Castle, Co Clare. The Benedictine Father Gregory Collins, has written a paper on the religious symbolism of the triptych in the journal Studies.

There are interesting questions about the religious affiliations of Ludovicus Proost, whose signature can be seen on one of the panels of the triptych. Both Roman Catholic and Protestant symbolism can be found in the painting, which may on purpose reflect the religious strife in the Netherlands in 1611, when the triptych was painted. 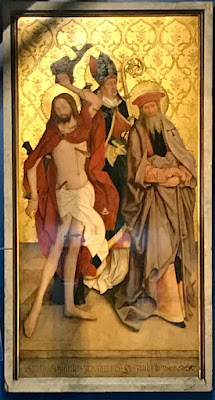 The painting of three saints was once part of a German altarpiece depicting the ‘Fourteen Holy Helpers’ (Photograph: Patrick Comerford, 2017)

The painting of Saint Sebastian, Saint Nicholas of Myra and Saint Anthony of Egypt was originally part of a late-medieval German altarpiece that probably depicted the ‘Fourteen Holy Helpers’ (Vierzehnheiligen), the subject of a popular devotion in Germany and central Europe.

The saints are identified both by their names at the bottom of the panel and by their attributes, which allowed illiterate people to identify them.

Saint Sebastian is pierced by arrows at his martyrdom, yet his beard and open red mantle make a connection with images of the Risen Christ.

Saint Nicholas is depicted as Bishop of Myra with a crozier, mitre and cope, and carries a Bible or prayer book and three golden balls that are a reminder of his miraculoous intervention in the lives of three children in peril.

Saint Anthony of Egypt, a hermit, is identified by a tau cross on his robe and, once again, with a pig.

The faces are particularly well painted, suggesting this is the work of a master painter who was influenced by the Renaissance. The figures, clothing and attributes are executed in the Gothic style by minor painters, as was the custom. The background is skilfully gilded to resemble a damask cloth of gold hanging.

The painting is possibly by the Lichenthal Master, and was part of a late mediaeval German altarpiece, although other sources suggest that the artist is Bernhard Strigel (ca 1461-1528), a German portrait and historical painter of the Swabian school. the most important of a family of artists in Memmingen. He was born in Memmingen and was probably a pupil of Zeitblom at Ulm. He enjoyed the patronage of the Emperor Maximilian I, and while he was working for him travelled to Augsburg, Innsbruck and Vienna.

Strigel’s religious paintings are of historical interest, but they are of less artistic value than his portraits. Many of his works were lost or destroyed during the Reformation and the Thirty Years War.

This painting belonged to the Westminster Diocesan Trust until 1969, when it was sold at Sotheby’s for about £3,400, perhaps to fund a building conversion programme.