Why did two people
marry each other twice in
two different churches? 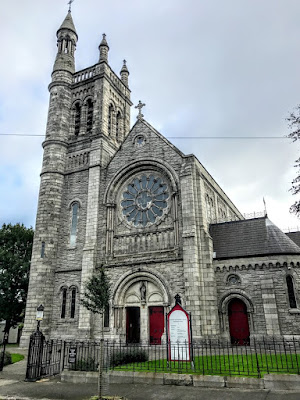 The Church of the Holy Name on Beechwood Avenue, Ranelagh … a memorial in the south porch recalls a family disinherited because of a Catholic marriage (Photograph: Patrick Comerford, 2017)

During my visit to the Church of the Holy Name on Beechwood Avenue earlier this week, I realised how this church was a fashionable venue for suburban weddings in south Dublin about 100 years ago.

Two former Taosaigh were married here – Seán Lemass and Charles J Haughey – and Padraic Pearse was supposed to be the best man at the wedding here of another 1916 leader, Thomas MacDonagh and Muriel Gifford in 1912, but he forget to turn up on the wedding day.

But a plaque in the south porch also recalls another wedding – or rather, the two weddings of the parents of John French. Their first wedding caused a social stir and resulted in the children being declared illegitimate; the second wedding served to illustrate the dying pangs of the Penal Laws many decades after Catholic Emancipation, and stirred a lengthy debate about who were the legitimate heirs to an old family title.

That brass plaque in the south porch also conveys the tragic consequences of World War I for one family:

The Hon John French (1853-1916) was born into a landed and titled family on 13 March 1853, the eldest son of Charles French (1790-1860), 3rd Baron de Freyne of Coolavin. The family lived at Frenchpark House, near Boyle, Co Roscommon, and for many generations members of the family sat in the Irish House of Commons as MPs for Co Roscommon.

John French, MP for Co Roscommon, was about to be given a seat in the Irish House of Lords as Baron Dangar in 1775, but he died before the peerage was formally created.

But Arthur and his wife Mary McDermott had no children, and when Arthur was widowed it became obvious that the title would die with him. So, he was given a new but similar title in 1851 as Baron de Freyne, of Coolavin in Co Sligo. This time, however, his younger brothers, John, Charles and Fitzstephen French, were named as heirs to the title, in the hope that this branch of the French family would never be without a titled representative.

Lord de Freyne died in 1856, five years after the new title had been created. The older title, dating from 1839, died out, but the newer title, handed out in 1851, and was inherited by his first younger brother, the Revd John French (1788-1863), who became the second Baron de Freyne.

The second Lord de Freyne was Rector of Grange Sylvae or Goresbridge in Co Kilkenny, and seems to have been more interested in breeding Irish red setters than attending to his parish or to politics in the House of Lords.

When he died in 1863, the family title passed to the next surviving brother, Charles French (1790-1868), as the third Lord de Freyne. Unlike his elder brothers, Charles French was happily married and had a large family of seven children, six sons and a daughter, and so it seemed there would be no problem of the family estates, totalling almost 30,000 acres in the west of Ireland, and the family title having male heirs to ensure succession to both. Or so it seemed.

On 13 February 1851, when he was in his 60s and when it still looked unlikely that he would ever inherit a title or have children, Charles French married a local woman, Catherine Maree, daughter of Luke Maree from Fairymount. She has been described as a ‘peasant girl’ who was born around 1830 or 1831. He was more than three times her age: she was 20 and he was almost 61 and the marriage was performed by a local Catholic priest.

Catherine may have been pregnant at the time of the marriage, and Charles and Catherine quickly had three children, one after another:

The obscure interpretation of the law was causing scandals in society and eventually legislation was needed to rectify a legal anachronism and injustice when the marriages of Barry Yelverton and the succession to the title of Lord Avonmore were challenged in the courts in 1861-1864.

And so, Charles and Catherine were quietly married a second time in 1854, perhaps in the hope of legitimising their four children, and ensuring succession to the title and estates.

This time the wedding took place on 17 May 1854 in All Saints’ Church, Grangegorman, Dublin, and was performed by the Revd William Maturin. Charles gave his address as the Albert Hotel, which was in Dominick Street, Dublin, and his occupation as ‘late captain’; Catherine gave her address as Anna Villa, North Circular Road, which technically made her a resident of the parish. He was then 63 and she was 23; he describes himself as a bachelor, she as a spinster, although their fourth child had been born within the previous month. She was illiterate and signed the register with an X.

All Saints’ Church, Grangegorman … Charles French and Catherine Maree were married here for a second time in 1854 (Photograph: Patrick Comerford)

Charles and Catherine went on to have four more children, three sons and a daughter:

Lord de Freyne celebrated his 68th birthday on the day his youngest son was born in 1858. He died on 28 October 1868, and in 1869, all six of his sons arrived as boarders at Downside Abbey, the Benedictine-run Catholic public school in Somerset, near Bath.

They were all to be educated as Catholics, despite the confusion of their parents’ marriages.

But it was still uncertain which son was going to succeed to the family title. The Yelverton case had been heard and appealed, and new legislation on legitimacy had been enacted. The Roll of the House of Lords, which was issued each year, shows blanks against the name of the holder of the de Freyne peerage in 1875 and 1876, indicating that the matter was still undecided, and the estates were administered on behalf of the family by Valentine Dillon, whose daughter later married John French.

Eventually, however, lawyers decided the 1851 marriage was invalid and any children born in that marriage were illegitimate. The first four children continued to use the prefix ‘The Hon,’ indicating they were the legitimate children of a peer. But Arthur French, the first son born after the 1854 marriage, succeed as 4th Baron de Freyne. The former Catherine Maree died on 13 November 1900.

Arthur French was known as a cruel landlord and ruled his estate and his family with a rod of iron. In 1902, when his tenants refused to pay their rent, he took leading members of the Irish Party to court, accusing them of incitement.

The fourth Lord de Freyne had the doubtful pleasure of reading his own obituary in The Times on 11 September 1913. On 23 September 1913, The Times, reported: ‘Lord de Freyne, whose death was wrongly announced last Thursday week, died yesterday morning at his residence, Frenchpark, Co Roscommon, in his 59th year.’

When he died, Frenchpark and the title passed to his eldest son, Captain Arthur Reginald French. In 1902, as a 23-year-old, this Arthur was also at the centre of a society scandal that the London evening newspapers called ‘a romance of the peerage’ when he married an 18-year-old barmaid and single mother, Annabel Angus, in Rothes in Scotland.

He was a lieutenant in the Royal Fusiliers with mounting mess debts. She was already the mother of a small child, and had a brief marriage to another officer that had ended in a quick divorce.

But they had no children and the future Lord de Freyne soon grew tired of his wife. Less than three years after their marriage, he went to New York and spent his days and nights drinking in the Bowery. When he disappeared, leaving his luggage in a New York hotel, his family and former friends feared that he had been kidnapped or murdered.

After a search that lasted several weeks, he was found at Fort Slocum on Long Island, where he had enlisted as a private in the US army. When he succeeded to the title in 1913, he was an American soldier in the Philippines. He returned to Frenchpark, but without Annabel. When World War I broke out, he returned to the army, and was killed in action at the Battle of Aubers Ridge in Flanders in 1915.

He is among four members of this family who died in World War I and are named in plaques in the Catholic Parish Church in Frenchpark: Edward Fulke French (1886-1919), who fought in the Dardanelles and died a prisoner of war in Mainz; George Philip French (1890-1915), killed in action in Flanders; and Ernest Aloysius French (1894-1917), who died of wounds in Flanders in 1917.

Meanwhile, his uncle John French, the second son who was excluded by law from inheriting the titles and estates, was living in Cobh (Queenstown), Co Cork. John French was a Resident Magistrate or JP for Co Kerry (1892-1898), Co Limerick (1898) and Co Roscommon.

On 26 July 1877, he married Nannie Dillon. They were the parents of 10 children, six of whom survived, but two of those sons died within weeks of each other in World War I, and this is the family commemorated in the south porch in the Church of the Holy Name in Beechwood Avenue.

World War I took a severe toll on this branch of the French family. John French was also a distant cousin of two key players in the 1916 Rising, Charlotte French (1844-1939), better known as Madam Despard, who spent a lot of time at Frenchpark, where her father was born, her brother General John French (1852-1925), who was involved in suppressing the 1916 Rising and became Lord Lieutenant of Ireland and Earl of Ypres. The three were also distant cousins of Douglas Hyde (1860-1949), the first President of Ireland, who is buried in the churchyard at Frenchpark, where he spent much of his childhood and where his father was the rector.

But the 1916 connections are closer, for the Church in Beechwood Avenue was also the venue for the wedding of the 1916 leader Thomas McDonagh and Muriel Gifford. Padraic Pearse was supposed to be the best man at that wedding, but forget to turn up … and that too is a story for another day.