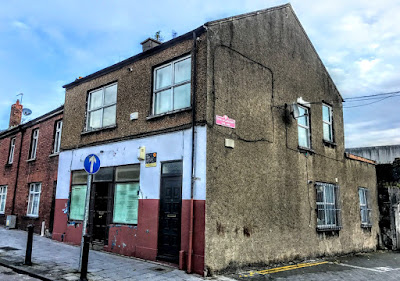 The Tholsel in Limerick stood in Mary Street in the old Englishtown district of the city. It served as the headquarters of Limerick Corporation until these moved to the Exchange building on Nicholas Street. It was demolished in the early 20th Century after it fell into dereliction.

Although the word means ‘town hall,’ its precise meaning is uncertain, the name ‘Tholsel’ seems to be derived from two old English words: toll, meaning tax, and sael or hall, the place where tolls were paid.

The name refers to many public buildings in towns and cities throughout Ireland. In those towns, the Tholsel was the town hall, but in the Middle Ages it was also the courthouse, town gate, a prison, a market house, the council chamber, a customs house, guild hall, a meeting place for merchants, a place where tolls or taxes were collected, and a market place among other functions.

In Dublin, the Tholsel was a late mediaeval building, built as a merchants’ hall at the corner of Nicholas Street and Christ Church Place, next to the Church of Saint Nicholas Within.

There was a Tholsel at Galway, built in 1639 and demolished in 1822, and Tholsels still stand in Carlingford, Drogheda, Kilkenny and New Ross.

The Tholsel in Limerick stood on Mary Street, then the High Street in the mediaeval English Town, close to Saint Mary’s Cathedral and King John’s Castle. It is said the first Tholsel in Limerick was built as a town hall by the Vikings who arrived in Limerick in 812 and built their city on King’s Island.

The Tholsel built by the Danes in Limerick may have been the same as the Thing-Mount that stood on the present site of Saint Mary’s Cathedral. This was first used as a town hall, and it later became a place where the city authorities collected taxes.

However, the Tholsel on the present site in Mary Street was built in 1449. This was the city’s first town hall, and it also served as a customs house, a court house, and a chamber of commerce.

In late mediaeval Limerick, the courthouse in the Tholsel was the main court in the city and it derived its authority from a charter granted by Henry V in 1413. The mayor and two sheriffs were the three principal judges in the court, which sat once a week.

This building was four storeys high and had a plain façade facing the street. It was completed by 1750. In that year, the Tholsel became the county gaol, at a cost to the public of £1,000. However, conditions were unacceptable, the cells were dark, damp and overcrowded, and prisoners were underfed and poorly treated.

When John Howard (1726-1790), the prison reform campaigner, visiting the gaol in 1788, he reported on the appalling conditions in which prisoners were held. A new county gaol was built by Merchants’ Quay, and the Tholsel closed as a prison.

By 1811, the building was dilapidated. It may have been restored soon after, and by 1837 it was the chief civil court in Limerick. It sat every Wednesday, with the mayor and sheriffs presiding as judges, assisted by the recorder as assessor, the town clerk as protonotary.

Still, when Limerick Corporation was reformed in 1841 under the Municipal Reform Act, there are references to the Freemen of Limerick, the administration of local justice through the Tholsel Court and the Court of Conscience and the general administration of the Corporation.

The Tholsel was demolished in 1936, but a small portion of the original building was behind the shop was that later built on the site. The site has been built on and the plain utilitarian shop building in Mary Street that has replaced the lost Tholsel is now rented by Sinn Féin as a local office.

A sign on the former Tholsel site quotes an anonymous rhyme:

This year the foundation of the Tholsel’s laid
Where justice in those days was well displayed
The use diverted, ’tis now the common jail
Where men do lie, not wanting crimes – but bail. 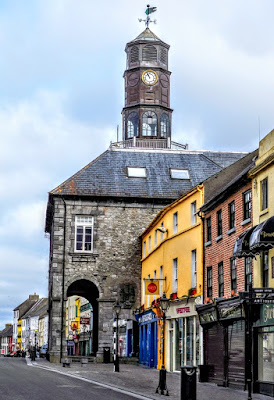 Thank you for that, it was fascinating in that I have been familiar with this building all my life, but its history was something I was unaware of.
Tom Collopy
tom@frontlineems.ie