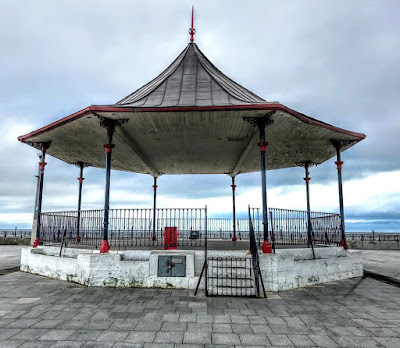 The bandstand on the seafront in Bray, Co Wicklow, in the fading light of dusk this afternoon (Photograph: Patrick Comerford, 2017)

It is some months since I have written about or commented on the theme of ‘Living with Sarcoidosis.’ Like many people living with this condition, I have learned to adapt to understand what is happening to me when the symptoms flare up.

In recent months, however, I noticed an occasional dizzy spell, when it took a few seconds (and no longer) to regain my balance.

I am not too perturbed or bothered about very minor incidents like these – although it is at times like these that I am pleased that I never learned to drive. I wondered, without foundation whether these had anything to do with my Sarcoidosis or my Vitamin B12 deficiency.

Thankfully, I have a GP who pays careful attention to every little detail. And so I have spent these two days in Dublin, visiting Tallaght Hospital each morning, and having a heart monitor attached to my chest for 24 hours.

Watching other postings on social media by people with pulmonary Sarcoidosis, I notice how many of them need regular heart check-ups and monitoring. My experience over a 24-hour period was a very painless, unobtrusive procedure, with cheerful, attentive professional staff in the hospital.

For anyone, hospital visits like this are times of anxiety and stress. Travelling to Dublin late on Monday in order to make an early Tuesday morning appointment involved a 5½-hour journey from Askeaton on public transport.

But the stress was compounded on Tuesday morning by three frustrating efforts to book a taxi – the first two simply failed on the app on my phone, without any explanation; on the third occasion, the taxi driver decided to cancel his acceptance of the booking when his own app failed, although the message would only reach my phone late in the afternoon.

A fourth call eventually resulted in the taxi driver who had cancelled his booking turning up. By then, after half an hour delay, we were straight into the morning rush-hour traffic that builds up at this time of the year.

It all goes to test the real meaning of being patient and being a patient at one and the same time.

But, to be honest, the only unpleasant parts of this experience are seeing other people’s distress, eased only by the care and attention they receive from hospital staff and the love and tender affection that is obvious in the family members who stay patiently with them. 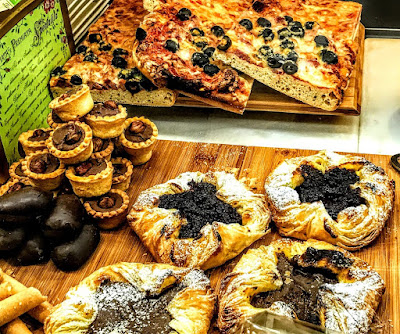 Later this afternoon, after returning to Tallaght Hospital to have the heart monitor removed, two of us went to Bray for a walk on the seafront and a late lunch in Carpe Diem on Albert Walk.

After last month’s visit to Bologna, with visits to Ravenna, Rimini and San Marino, the sight of real Italian food was welcome once again, but was also a comforting way to bring these two days to a close with little less than a celebratory hint.

One of us had handmade Tagliatelle tossed with sundried tomatoes and Taggiasche olives in a smooth garden peas sauce, topped with creamy stracciatella; while the other dish was oven-baked Foglie d’Ulivo pasta with cod and potato bites in a velvety béchamel sauce. These were accompanied by breads, a glass of Refosco and an iced coffee, and followed by double espressos. 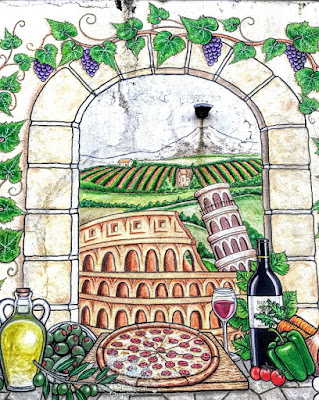 This corner of Bray is like a little corner of Italy. On the other side of Albert Walk, on the corner with the seafront, Campo De’ Fiori on Albert Avenue, is another taste of Italy – both inside and outside.

Pizzas ’n’ Cream on Albert Walk claims to be ‘the oldest pizzeria in Ireland’ – it was established in 1986. Nearby, also on Albert Walk, is the Caffé Letterario Gatta Nera – the Black Cat Literary Café, which offers authentic tastes of Sicily. 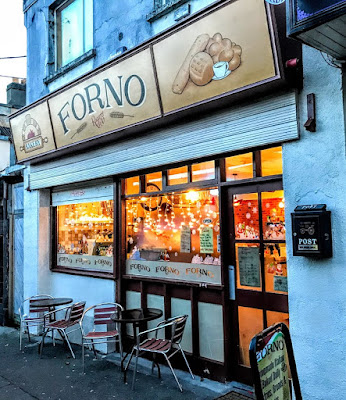 A new addition to these Italian delights in this area of Bray is Forno Ragazzi, which opened on Albert Walk last April.

At the counter, I bought from their selection of breads, which include wheat flour and wholegrain baguettes, loaves and wheat flour small rolls or cazzotti. Their focaccia is made following a traditional recipe of wheat flour, olive oil and sea salt, and their sliced pizza include Margherita and potatoes and rosemary, all freshly baked in-house.

After a walk through the Victorian and Edwardian streets of Bray, and browsing in some bookshops, as well as photocopying the order of service for the Service of Nine Lessons and Carols in Saint Mary’s Church, Askeaton, next Sunday afternoon, there was another walk along the seafront in the late afternoon disk before heading back to Knocklyon. 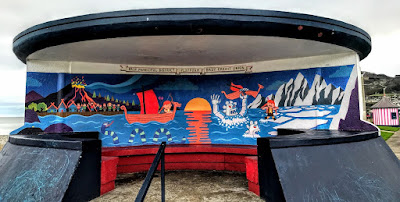 A freshly-painted shelter on the seafront in Bray, Co Wicklow, in the fading light of dusk this afternoon (Photograph: Patrick Comerford, 2017)

Posted by Patrick Comerford at 18:43