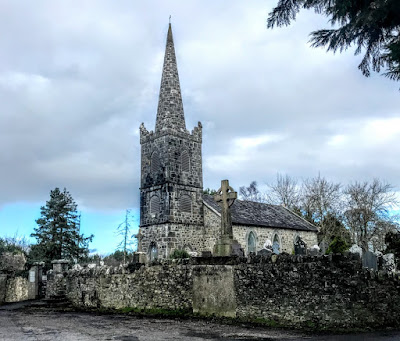 At the end of an interfaith walking tour of Limerick yesterday, which began at Limerick Islamic Cultural Centre, Dooradoyle, and included Jewish sites in the area around Wolfe Tone Street and the Jewish Cemetery in Castletroy, a small group of us ended the day visiting the former Church of Ireland parish church in Kilmurry.

This church, behind the Hurler’s Pub in Castletroy, seems to retain its once-rural setting, but is surrounded by modern housing estates.

It is said that a church has stood on this site in Kilmurry for more than 1,000 years. The original church may have been named after a Munster saint, probably Mo-chuaroch.

With the arrival of the Anglo-Normans, the dedication of the church was changed to Saint Mary Magdalen. Saint Mary’s Cathedral, Limerick, was founded 850 years ago, in 1168, and King Donal O’Brien is said to have endowed the Cathedral Chapter in 1194. In the Foundation Deed, he gave for the sustenance of the Canons of the Cathedral ‘… all the dues of Cotheann outside the city, and the Churches of Saint Mary Magdalene and of Saint Martin, with everything pertaining to them …’

The Black Book of Limerick records Myler FitzHenry’s Inquisition of 1201 and identified the Church of Saint Mary Magdalene was the Church of Kilmurry.

The de Burgo family were the early mediaeval landed proprietors in the parish of Kilmurry and the benefice of Saint Mary Magdalen was in their gift, giving them the right to appoint the priests of the parish. The de Burgos also founded Athissel Monastery, near Golden, Co Tipperary, and endowed the Prior with the right to present to the living of Kilmurry.

When Robert of Emy, became Bishop of Limerick in 1251, he disputed a nomination made by the Prior that year and began canonical proceedings against the Prior to recover the Church.

Pope Innocent IV intervened in 1253 commissioned the Bishop, Archdeacon and chapter of Cloyne to try to settle the dispute. No decision was reached after many months, and finally the judges ordered the temporary sequestration of Kilmurry. There was an appeal, and the case was due to go to the Bishops of Waterford and Ferns when an agreement was reached and Kilmurry was assigned to the Prior of Athissel.

For several generations disputes and appeals followed in rapid succession. In 1325, Ade de Gouly and Richard Pierpoint were involved in a suit about Kilmurry which had been held by Ade de Gouly’s great-grandfather, Regin Le Flemyng.

In 1474, John O’Griffin, a priest of Killaloe, bound himself to the Apostolic Chamber in the name of Dermod Ytynacanthy, priest of the Diocese of Limerick, for the fruits unduly received by the said Dermod for some years from the perpetual vicarage of the parochial church of Saint Mary Magdalene.

A commission appointed by King Charles I sat in Limerick from 28 to 30 July 1615 and reported that church in Kilmurry and its chancel were in ruins. A new church was built on the site of the old church.

In the Cromwellian era, under the Act for the Settlement, towns, church lands and tithes were all reserved by the Puritan Parliament for their own purposes, and all Church dignitaries were removed from office. The Parish of Kilmurry suffered with the rest, and the greater part of the lands were granted to the Hollowblades Company.

The church may have survived, only to become a total ruin during the Sieges of Limerick in 1690 and 1691, because of its proximity to the Williamite camp.

The Glebe House at Kilmurry was built in 1790, and in 1792, the parishes of Kilmurry and Derrygalvin were united when the Revd Jacques Ingram was Rector. Derrygalvin was a parish to the south of Kilmurry, but there are no remains of the church apart from some fragments in an old burial ground in Ballysimon. 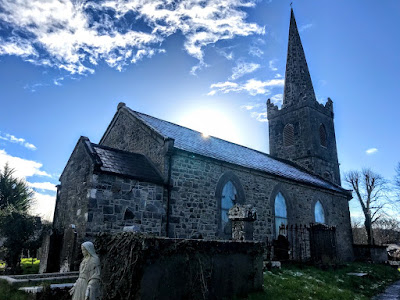 Kilmurry Church was rebuilt in 1810-1812 on the site of the mediaeval church (Photograph: Patrick Comerford, 2018)

Another new church was built on the former site between 1810 and 1812, with a spire and steeple, with a grant of £580 from the Board of First Fruits. However, on the night of 15 and 16 December 1812, a heavy gale from the south-east damaged the church, and it was nearly destroyed by lightning.

The Rector of Kilmurry, the Revd Henry Ievers Ingram, a former army chaplain, repaired the church at his own expense.

When the Revd Charles Ward was appointed Rector of Kilmurry in 1861, he found the church in a sad state of repair, and the churchyard in a terrible condition. He closed the church for over a year while repairs were being carried out.

The Limerick Chronicle on 15 March 1866 announced the re-opening of the church, reporting ‘…it has been thoroughly fitted up inside, a new vestry room built, the aisles and side porch beautifully tiled, the entire edifice newly painted, so that in fact Kilmurry Church is now a fitting temple wherein to worship God. It is one of the neatest ecclesiastical structures in the dioceses.’

New windows were installed in 1872 and in further improvements the following year included a new East Window. 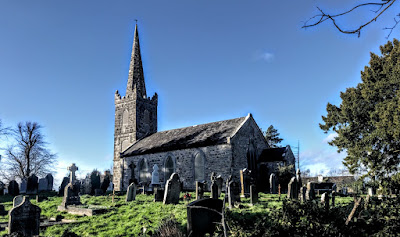 New windows were installed in Kilmurry Church in 1872 and the East Window was added in 1873 (Photograph: Patrick Comerford, 2018)

The Parish Church in Kilmurry now entered upon the most prosperous period of its history. Surrounded on all sides by the homes of wealthy merchants from Limerick, no appeal for funds ever went unanswered and subscriptions for repairs came from places as far away Ennis, London, Belfast, Cork, Edgbaston, and even a £5 note arrived from an ‘Old Buffer’ in the Madras Army.

For a time, nearby Plassy House was the home of Sir Guy Campbell and his wife Pamela, daughter of Lord Edward FitzGerald. The stone on the grave of their infant son in the churchyard reads:

To the Memory of
John
The Infant son of
Guy Campbell, Bart.
and
Pamela, his wife.
Died at Plassy
4th Feb. 1828

Another stone nearby, dated 1824, has sculpted representations of Christ’s betrayal and passion, including a cock, scourge and 30 pieces of silver.

The Ven Richard Sargint Sadlier Ross-Lewin (1849-1921), a native of Co Clare, was Rector of Kilmurry from 1886-1921 and Archdeacon of Limerick from 1919. His collections of poetry, including West Briton Poems and In Britain’s Need. His funeral took place from Saint Mary’s Cathedral to Killmurry Church.

A general appeal in 1950 raised £350 to repair the church tower, redecorate the interior and install electric light and heating.

The church was deconsecrated in recent years, and it became the home of Kilmurry Church Arts and Cultural Project, which is attached to the University of Limerick. The project aims to keep Kilmurry Church available and open to the community. The committee runs the space on a caretaker basis and is auditing the needs of local community groups.

We crossed the stile in east end of the rubble limestone boundary walls yesterday afternoon into the graveyard the surrounds this modest but picturesque former church.

This church has a three-bay nave, a three-stage square-plan pinnacled tower with a spire at the west end, and a single-bay, single-storey vestry at the east end. The tower is built of dressed limestone and the walls are built of rubble limestone. The nave has pointed arch openings with cut limestone surrounds and trefoil-headed lancet stained-glass windows.

The pointed arch opening at the east elevation has a limestone surround and Y-tracery stained glass windows.

The church was closed when we arrived. But it still retains most of its original form and massing, together with the remains of some important salient features and materials that enhance the quality of the site. 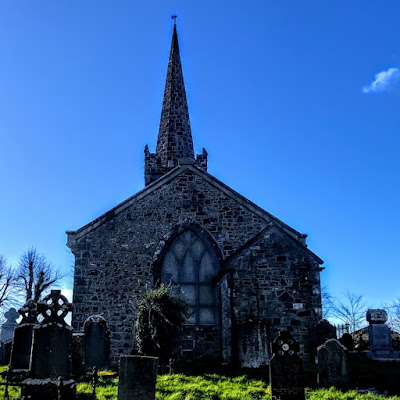 I was in kilmurry parish -- baptised there 1951 my dad George Davis the last church warden buried there
1961 on
West Side of church
Happy memories of Castletroy.
Arthur Davis

The Church had extensive works in the 90s .this work was carried out by CYTP community youth training project FAS. Participants included skilled and unskilled trades men
The new doors and Louver windows to the tower were made by Mr Eddie kelly RIP fas instructor and Bernard o Reilly Carpenter. The foreman on site was Mr Noel Mccarthy This was a beautiful church to have worked on

The Church had extensive works in the 90s .this work was carried out by CYTP community youth training project FAS. Participants included skilled and unskilled trades men
The new doors and Louver windows to the tower were made by Mr Eddie kelly RIP fas instructor and Bernard o Reilly Carpenter The foreman on site was Mr Noel Mccarthy This was a beautiful church to have worked on