Following the Stations
of the Cross in Lent 45:
Lichfield 13: Taken Down 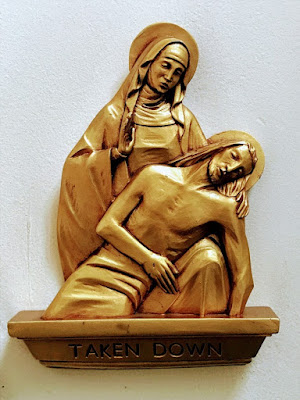 ‘Taken Down’ … Station 13 in the Chapel at Saint John’s Hospital, Lichfield, Jesus dies on the Cross (Photograph: Patrick Comerford)

Today is Good Friday and we have come to the climax of Lent. Later today, at Noon, I am beginning to lead three hours of prayers cross in Saint Mary’s Church, Askeaton, Co Limerick (12 noon to 3 p.m.), on the theme of following Christ to the foot of the Cross at Calvary.

For these final two weeks in Lent, I am looking at the 14 Stations of the Cross in the Chapel of Saint John’s Hospital, Lichfield. Since I was a 19-year-old, I have regarded this chapel as my spiritual home.

In this chapel, close to the Stations of the Cross, a small plaque worked in painted stucco on wood, shows the Virgin Mary kneeling in prayer before the Christ Child, who looks up into her face, his hands lifted up in a child’s loving gesture to his attentive mother.

Above, there are four angels crowning the inner garland, on each side are assorted painted flowers, and within the frame are two lilies, symbols of Easter and the Resurrection.

Below are the winged faces of two golden putti or cherubim, each on a cloud, perhaps symbolic of the two angels who later appear at the empty tomb announcing the Resurrection.

The inscription below the platform, in an inset on the outer frame, consists of two simple words, ‘Ave Maria’.

Now, in Station XII, the Mother who once cradled the Infant Child on her lap, now holds her dead son on her lap. The hands once raised in adoration and in love, are now clutching his shoulder and raised in horror and in anguish.

Had she known that this was the end, would she have said yes to the Angel Gabriel at the Annunciation when he greeted her with those words, ‘Ave Maria, Hail Mary’? 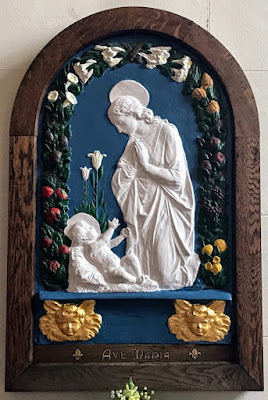 ‘Ave Maria’ … a sculpture beside the Stations of the Cross in the Chapel in Saint John’s Hospital, Lichfield (Photograph: Patrick Comerford) 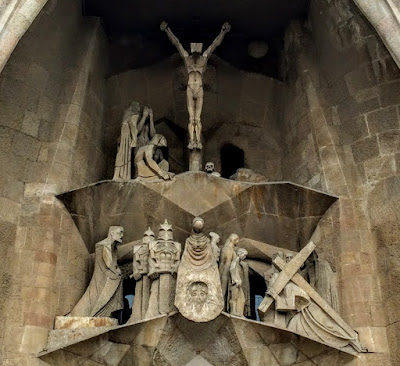 Gaudí’s Crucifixion on the façade of Sagrada Familia in Barcelona (Photograph: Patrick Comerford)

The Collect of the Day (Good Friday):

Almighty Father,
Look with mercy on this your family
for which our Lord Jesus Christ
was content to be betrayed
and given up into the hands of sinners
and to suffer death upon the cross;
who is alive and glorified with you and the Holy Spirit,
one God, now and for ever. Amen.

Tomorrow: ‘Entombed’ … Station 14 in the Chapel at Saint John’s Hospital, Lichfield, Jesus is placed in the tomb. 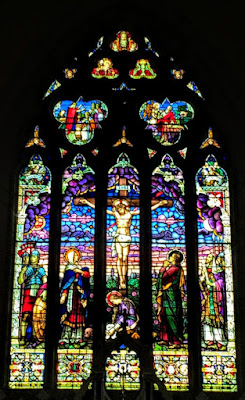