A Victorian fountain
that found a new
location in London 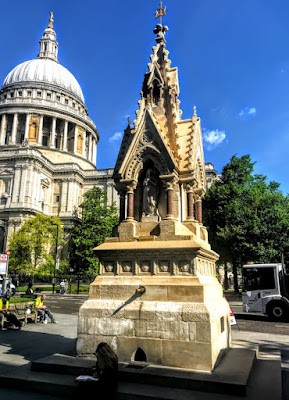 Close to Saint Paul’s Cathedral and the Millennium Bridge, the Saint Lawrence and Saint Mary Magdalene Drinking Fountain on the east side of Carter Lane Gardens is an unusual and richly decorative work of Victorian street furniture. I took some time to appreciate the fountain last week while I was walking between Liverpool Street station and the offices of USPG in Southwark.

With its Gothic design and its sculptures, it recalls a time when the provision of clean, freely accessible, drinking water in towns and cities on these islands was a valued, and often lavishly made, philanthropic gesture.

Saint Lawrence Jewry is a guild church on Gresham Street, next to Guildhall, and is the official church of the Lord Mayor of London.

The church was originally built in the 12th century and dedicated to Saint Lawrence. The weather vane on the present church is in the form of gridiron, the instrument of his martyrdom. The church is near the former mediaeval Jewish ghetto in London, which was centred on the street named Old Jewry.

From 1280, Balliol College, Oxford, was the patron of the church. Sir Thomas More preached in the older church. This church was repaired in 1618, when all the windows filled with stained glass paid for by individual donors.

The mediaeval church was destroyed in the Great Fire of London in 1666 and was rebuilt by Sir Christopher Wren between 1670 and 1687. The church suffered extensive damage during the Blitz on 29 December 1940, and after World War II, the City of London Corporation agreed to restore it as Balliol College did not have the funds needed.

The church was described by Sir John Betjeman as ‘very municipal, very splendid.’ It was designated a Grade I listed building on 4 January 1950. It was restored in 1957 by Cecil Brown to Wren’s original design. 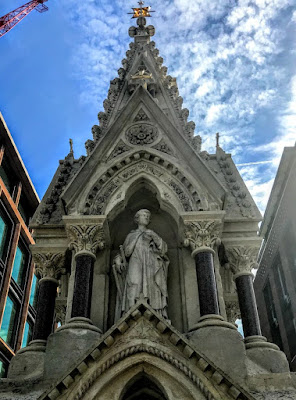 Saint Lawrence depicted on the fountain with the gridiron, the symbol of his martyrdom (Photograph: Patrick Comerford, 2018)

In the early 19th century, water supplies to London and other large towns and cities were inadequate for the needs of the population, badly contaminated, and responsible to a great degree for the high mortality rate.

The Metropolitan Water Act (1852) brought about in a marked improvement, but supply was far from ideal and outbreaks of cholera continued. Philanthropic bodies and civic amenity groups played a significant role in improving sanitary conditions from the 1850s on, particularly through providing water fountains.

These organisations included the Metropolitan Free Drinking Fountain Association, founded in 1859, which established a great number of drinking fountains that provided free, clean, water to all. The Saint Lawrence Jewry fountain was erected by the parishes of Saint Lawrence Jewry and Saint Mary Magdalene. 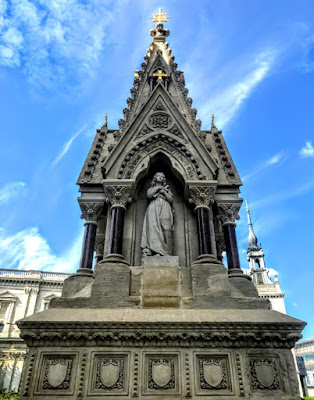 The fountain was designed by the architect John Robinson (1829-1912). Robinson studied at the Royal Academy and became the pupil of Sir James Pennethorne (1801-1871), chief architect at the Office of Works and a student of both the Regency architect John Nash (1752-1835) and AWN Pugin.

When Pennethorne retired, Robinson established his own practice at Carteret Street in Westminster. Robinson’s works were varied, including office, hotel and domestic buildings, interior schemes, and several memorial structures.

The sculptural work on the fountain is the work of Joseph Durham (1814-1877), a noted Victorian sculptor. Durham studied under John Francis before working for Edward Hodges Baily, the sculptor of Nelson’s Column in London. He was working independently by about 1835 and one of his first major commissions was the memorial to commemorate the Great Exhibition of 1851.

The contractor was William Thomas.

The fountain is built with Portland stone with polished pink granite columns, and a bronze relief sculpture. It is square in plan, about 9.5 metres high and 2.7 metres wide, with the fountain element projecting from the north face. It stands on two low steps.

The fountain has an elaborate Gothic style. A substantial base, about two metres high, carries a canopy formed of four hooded niches and a central sprocketed spire.

A band of carved shields runs around the top of the base. The niches have trefoil arches, with the hoods over being steeply pitched and sprocketed, with a pointed arch and foliate designs carved into the tympana. The hoods are supported by granite columns with stiff leaf capitals.

In the north-facing niche is a carved stone statue of Saint Lawrence holding a grid iron, on which he was martyred. In the south-facing niche is a statue of Saint Mary Magdalene holding a cross, and with a skull at her feet. The other two niches are empty but are believed to have originally held the names of past benefactors of the churches carved into white marble slabs. 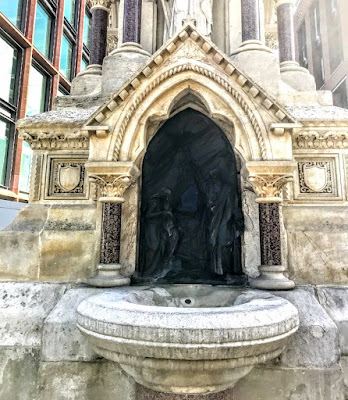 The fountain is on the north face of the monument and takes the form of a niche with carved hood resting on granite columns. Set into the niche is a bronze bas-relief of Moses striking the Rock at Horeb (Exodus 17: 4-6), water runs down the face of the bronze from where Moses’ staff strikes the rock. To the left of Moses is the figure of a woman holding a cup of water to her child’s mouth.

The water flows into a shallow stone bowl that projects out from the fountain and is supported on a broad granite column with a stone base.

The fountain remained in its original location until 1970, when the redevelopment of Guildhall Yard forced its removal. It was dismantled into 150 pieces and put into storage with the intention to re-erect it at a later date.

But it remained in a city vault for 15 years, and it was then stored in a barn at a farm in Epping. The pieces were sent to a foundry in Chichester for reassembly in 2009, when much of the stonework had to be replaced. It was moved in 2010 to its present location, at the north end of Carter Lane and to the south of Saint Paul’s Cathedral. 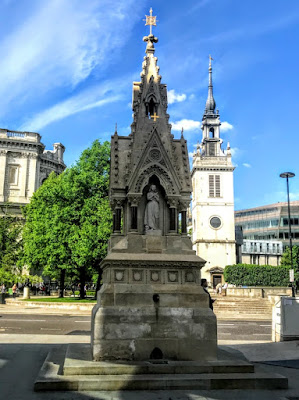