Corcomroe Abbey: the
Cistercians’ fertile abbey
in the barren Burren 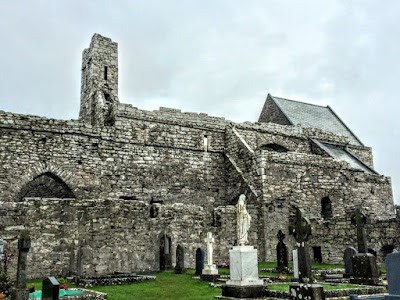 Corcomroe Abbey stands on the edge of the Burren, about 7 km east of Ballyvaughan (Photograph: Patrick Comerford)

During my visit to the Burrren last weekend, my postings from Kilfenora Cathedral, Ballyvaughan and other places in Co Clare attracted strong recommendations that I should also visit Corcomroe Abbey.

I put the abbey on my to-do list, forgetting that I had visited Corcomroe four years ago. But during the past week I came across my notes from that visit, and the photographs I had taken.

Corcomroe Abbey stands on the edge of the Burren, at the end of a road about 800 meters east of the village of Bellharbour, in a valley about 7 km east of Ballyvaughan.

Corcomroe was founded for Cistercian monks between 1195 and 1210 as a daughter house of Inisloughnaght Abbey, Co Tipperary. It was once known as Sancta Maria de Petra Fertilis (Saint Mary of the Fertile Rock), a reference to the Burren rocks and soil. Although there was no stream at the site, several wells probably provided water to the monastery.

Evidence of earlier religious settlements is found nearby in the deserted churches at Oughtmana, suggesting a long history of church life in the valley. 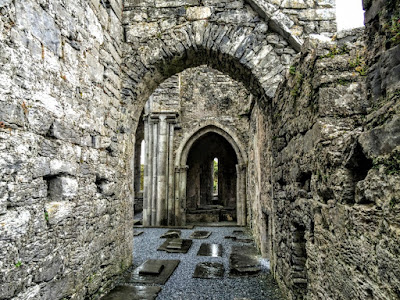 Corcomroe Abbey was founded by the O’Briens of Thomond and was once known as ‘Sancta Maria de Petra Fertilis,’ ‘Saint Mary of the Fertile Rock’ (Photograph: Patrick Comerford)

Some accounts say the abbey was founded by Donal Mór Ua Briain (Donald O’Brien), the patron of a number of other religious foundations in Thomond, who died in 1194. He was also involved in the foundation of other important churches in Thomond, including Saint Flannan’s Cathedral, Killaloe, Saint Mary’s Cathedral, Limerick, and Holy Cross Abbey, Co Tipperary.

Another local legend says the building was commissioned later by King Conor na Siudane Ua Briain, and that he executed the five masons who completed the abbey to prevent them from building a rival masterpiece elsewhere.

However, the documentary evidence for Corcomroe Abbey is scanty. Because the Cistercians did not engage in extensive pastoral work, few traditions relating to the abbey were maintained in local folklore. 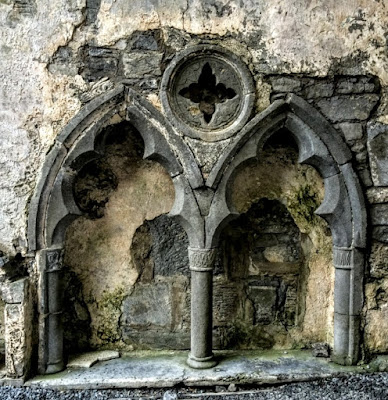 The double sedilia in the chancel at Corcomroe Abbey (Photograph: Patrick Comerford)

The church was built of local limestone in the early 13th century and consists of a nave with an aisle on the south side. There may have been plans to build a similar aisle on the north side of the nave, but this was never completed, perhaps because funds were insufficient. Nothing remains of the cloister arcade, but this abbey was once a magnificent example of the best architecture of its time.

Cistercians were traditionally divided into two parts, the chancel and the nave, separated by a screen. This church is cruciform in plan although the north and south transepts are quite short. There was a chapel in each transept, and a thick nearly-central wall topped by a small tower, built probably in the 14th to 16th century.

At the east end of the church, the chancel has a decorated ribbed vault in the Romanesque style and is lit by three tall lancet windows, with a single lancet window above 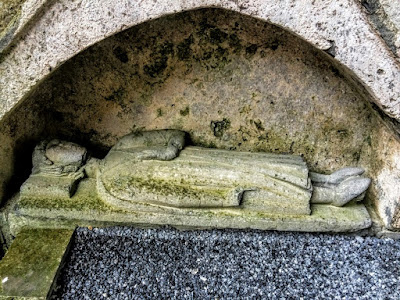 The tomb niche with the effigy of Conor O’Brien, King of Thomond, who died in 1268 (Photograph: Patrick Comerford)

The chancel has a highly decorated double sedilia and a tomb niche with the effigy of Conor O’Brien, King of Thomond, who died in 1268, a descendant of the founders and benefactors of the abbey.

Conor O’Brien, or Conor na Siudane Ua Briain, King of Thomond, fought a battle at Siudáine, close to Corcomroe, in 1268. On the battlefield, he was surprised by Conor Carrach O’Loughlain and slain with many of his retainers. His body was retrieved and was buried at Corcomroe by the monks. His tomb is one of the few remaining examples of the tomb an Irish Chieftain. The effigy is believed to be a copy of the figure at Roscommon Friary of Felim O’Conor, who died in 1265.

Where the chancel and transepts meet, several crossing arches feature capitals with carvings of human masks and dragons’ heads and flowers, including poppies, lily-of-the valleys and lotus leaves. 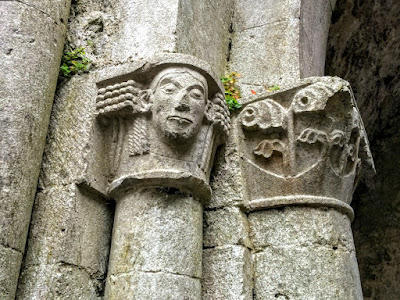 The capitals at the crossing are with carved of human faces (Photograph: Patrick Comerford)

The west gable has two tall lancet windows over a pointed-arch door.

In 1226, a papal mandate addressed to the Bishop of Kilfenora and the Abbot of Corcomroe shows that the abbey was integrated into the Cistercian network at that time and that the abbot was an important functionary in the local church.

The relationship with the mother-house at Inislounaght came to an end in 1228, and Corcomroe became subject to Furness Abbey in Lancashire. This was part of a move among Cistercians to bring the order’s more remote houses in Ireland under closer control.

In 1227, 1280 and 1287 there were complaints that the abbot of Corcomroe had failed to appear at the Cistercian General Chapter at Citeaux for a long time. 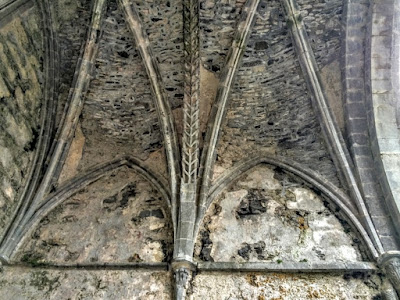 The chancel has decorated ribbed vaulting in the Romanesque style (Photograph: Patrick Comerford)

In another battle nearby in 1317, involving feuding between the O’Briens and their allies, the abbey was used as a barracks by Dermot O’Brien.

By the end of the 14th century, tis part of the Burren was held by a branch of the O’Cahans (O’Kane or Keane) from Derry, and they became stewards of the abbey lands.

Papal letters in the early 15th century refer to issues around appointments at Kilfenora and Killilagh, and John, the Abbot of Corcomore, became Bishop of Kilmacduagh in 1419. 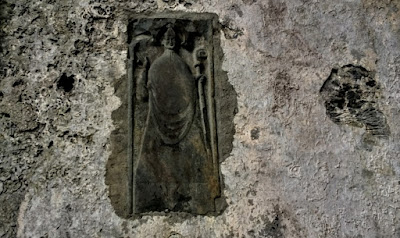 A figure of a mediaeval bishop with mitre and crozier in the church ruins (Photograph: Patrick Comerford)

Papal correspondence became more frequent after this time, dealing mainly with local abuses of order, rules notably the ban against marriage. Church dynasties had become quite common in Ireland at that time, and were also present at Corcomroe. Through the 15th century, the abbey and several parishes were controlled by the Tierney family.

The custom of hereditary abbots and the use of abbey resources and lands by powerful families brought about a decline in the fortunes of monasteries. The number of monks fell, monastic churches were reduced in size, and the church in Corcomroe was shortened by 13 meters in the 15th century. There is also evidence that suggests that at the time the monks' dormitory had fallen into disuse.

With the dissolution of the monastic houses at the Reformation, Corcomore Abbey and its lands were granted in 1554 to Murrough O’Brien, Earl of Thomond. For some time, the monks tried to continue to tend the fields and to maintain their presence in the area. 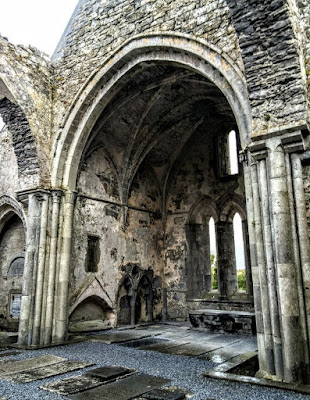 Titular abbots continued to be appointed for almost a century after the Reformation (Photograph: Patrick Comerford)

The property is last mentioned in the O’Brien family papers in 1702, when they were mortgaged by William O’Brien (1662-1719) to Donat O’Brien of Dromoland.

A late addition is the neo-classical tomb of ‘O’Loughlin King of the Burren Family Tomb,’ dating from the late 18th or early 19th century. It is in the floor in front of the niche with Conor O’Brien’s tomb.

The church is largely intact, but few traces remain of the domestic buildings. Parts of the high wall surrounding the five acre monastery precinct can still be seen.

Tthe Office of Public Works acquired the ruins in 1879, and today Corcomore Abbey is a popular place to visit on day tours through the Burren.

Corcomroe Abbey was brought back to life several years ago with a Dawn Mass on Easter morning initiated by the late John O’Donoghue, author of Anam Cara. 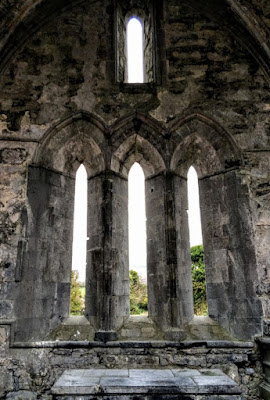 The lancet windows at the East End of the chancel (Photograph: Patrick Comerford)