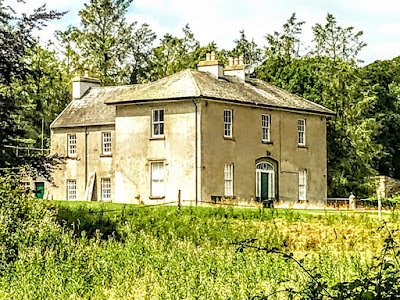 Kilmore House in Silvermines, Co Tipperary … a house with links with a branch of the Comerford family I am trying to trace (Photograph: Patrick Comerford, 2018)

In recent months, I have continued my genealogical search for further details of Comerford families who have lived in Co Limerick and neighbouring area.

The Ferguson family were woollen merchants and drapers in Limerick and also lived in Rathkeale, Co Limerick. However, I have had a little more difficulty in tracing the Comerford family of Silvermines, who seem to have lived for some generations at Kilmore House, near Silvermines and Nenagh, Co Tipperary.

So, on my way back from Dublin to Askeaton yesterday, two of us took a diversion near Nenagh, and in the warm summer sunshine went in search of Kilmore House.

Kilmlore House is a detached, three-bay two-storey house, built around 1800, with what may be an earlier lower three-bay, two-storey block to the rear. The form and scale of this house are enhanced by the retention of features such as timber sash windows, the slate roof, and the elaborate doorcase. 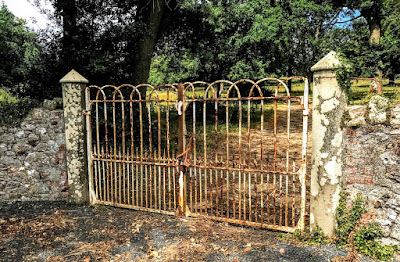 The interesting monolithic limestone piers at the gates at either end of the avenue at Kilmore House (Photograph: Patrick Comerford, 2018)

The elder John Comerford had died by the time his daughter Mary was married in 1870. On 12 October 1870, in the Church of Ireland parish church in Silvermines or Kilmore, she married James McCutcheon (1837-1891), of Castle Street, Nenagh. The officiant was the Revd A Adams and the witnesses were Thomas R Grey and Jane E Grey. Mary died in 1879 and seems to have had no children.

Mary’s brother, John Comerford, gentleman, of Greyfort, Borrisokane, married Elizabeth Alice Grey. The Landed Estates database at NUI Galway shows that the Grey family was living at Greyfort from the mid-19th century, and that Thomas R Grey was living in Greyfort House, with 500 acres, in the 1870s.

John Comerford and his wife Elizabeth Alice (Grey) were the parents of Georgina Frances Beatrice Comerford, who was born on 7 February 1870 at Kilmore, Silvermines, Co Tipperary.

John Comerford died on 19 December 1870 at the age of 26. His will was proved at Limerick on 31 January 1871 by his executors, his father-in-law, Thomas R Grey, of Greyfort, Borrisokane, and his brother-in-law, James McCutcheon, merchant, of Nenagh.

When John Comerford died in 1870, his widow, Elizabeth Alice (Grey), appears to have moved back to Greyfort House. 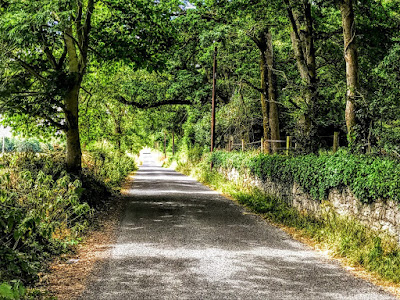 The road leading to Kilmore House in Silvermines, Co Tipperary … a house with links with a branch of the Comerford family I am trying to trace (Photograph: Patrick Comerford, 2018)

Joseph Ernest Hardy describes himself as a gentleman farmer, of Cranna, Portumna, Co Galway, and the son of Edward Hardy. Later, he reversed the order of his given names, and was known as Ernest Joseph Hardy.

The Hardy family was associated for a number of generations with Dartfield House, Co Galway. The history of this house has been researched in detail by Mark Thomas for the site Abandoned Ireland.

Dartfield belonged to the Wall family in the 1640s, and later passed to the Blake family of Ardfry. Joseph Henry Blake (1765-1803) was made Baron Wallscourt in 1800 for supporting the Act of Union. That year, he sold Dartfield to Robert Blake, a lawyer, of 4 Temple Street, Dublin. Robert Blake married Elizabeth Aylmer of Seneschalstown, Co Kildare, and they were the parents of at least one son and two daughters: Henry Blake; Elizabeth who became a Loreto nun at the convent in Rathfarnham and died in 1861; and Maria Louisa.

As a child, Henry Blake (1793-1851) inherited the fortune of his uncle, James Deane Aylmer of Seneschalstown. He studied law at Trinity College Dublin and Lincoln’s Inn, London, and was called to the bar in Dublin in 1816. By 1824 he was living at 8 Temple Street, Dublin and at Seafield, Oranmore, Co Galway.

In 1827, he built a new house at Dartfield, and it soon became a meeting place for the local hunt, the Galway Blazers. He hired the landscape designer James Frazer (1793-1863) as his head gardener, and another well-known garden designer, Alexander McLeish, head gardener at Terenure Park, Co Dublin, advised on the planting of the demesne.

Henry Blake was a JP and a Whig and publicly supported Daniel O'Connell. In 1839, he was one of a group of Co Galway landowners who called on the government to retain the Corn Laws.

Henry died aged 61 in 1851. He made his widowed sister, Maria Louisa Blake, the administrator of his estate. Her husband, James Henry Blake QC (1801-1841), died in London in 1841, leaving a daughter Emilia Julia Aylmer Blake.

After a number of conflicts with her tenants, Maria Blake and her daughter Emilia spent quite a lot of time abroad, particularly in Brighton and France. By 1869, Joseph Hardy was living at Dartfield, and by 1873 this was an estate of 1,304 acres.

Hardy was the owner of a small mill in 1837, and moved into grazing in 1846. By 1880, he was grazing some 6,000 acres for five landlords including Lord Dunsandle and Lord Clonbrock. This figure seems have include 800 acres around Dartfield.

Meanwhile, Mary Louisa Blake died in Chelsea on 17 October 1876. Her daughter, Emilia Aylmer-Blake was an accomplished poet and writer. On 3 July 1877, in Kensington Parish Church, she married the actor and playwright William Gowing as his second wife, and Gowing assumed the name Aylmer. Emilia had previously been engaged to the Count de Charette de Bois Foucauld, a landowner from Brittany.

Emilia was uncomfortable in Co Galway society, as the diary of Lady Gregory shows. Her interest in Dartfield lay mainly in seeing that it functioned peacefully and that the rents were paid.

Joseph Hardy was a Justice of the Peace, a member of the Church of Ireland synod and a Ballinasloe Union guardian. But he seems to have had limited tact and empathy and called in the police in a number of disputes with his tenants in the 1870s and 1880s. He died at Dartfield aged 71 on 30 January 1891. By then, his estate had been reduced to 1,800 acres.

The Hardy family continued to live at Dartfield, and eventually acquired the estate and Ernest Joseph Hardy, one of Joseph Hardy’s sons, seems to have been in charge. But by 1900, Ernest Hardy had moved to Cranna at Portumna, Co Glaway, at the time of his marriage that year to Georgina Comerford, only daughter of John Comerford of Kilmore, Nenagh, Co Tipperary.

The 1901 census shows that his brother James North Hardy (49) was living at Dartfield by then with his wife, Mary (40) and their children.

Ernest Hardy died on 28 May 1918 aged 55, with his wife, Georgina Beatrice Hardy, present at his death. Georgina Frances Beatrice (Comerford) Hardy lived on for almost and another half century, and died on 8 June 1957, aged 85, at Cranna, 5 Maryville Terrace, Leslie Avenue, Dalkey.

They are both buried in the Church of Ireland churchyard in Portumna, Co Galway. Their gravestone reads:

Ernest Joseph Hardy’s brother, James North Hardy, died aged 70 in late 1921, leaving his son, Cecil Aylmer Hardy, in charge of Dartfield. Cecil continued to farm at Dartfield until 1946, when he went to live in Glenageary, Co Dublin. He visited Co Galway occasionally, and on 7 April 1951 he was found dead in his car outside the entrance gates of Dartfield.

The estate was inherited by his daughters, Pamela Potterton, who married Hubert Potterton in 1952, and Alison Hardy. The Dartfield estate was sold in portions in the 1950s and the 1960s, and by 1966 Dartfield was standing empty.

Pamela Potterton died in March 1967; she was only 42. Dartfield was sold in 1984, and the house continued to slide into further decay. In 1993, it was bought by Willie Leahy, Master of the Galway Blazers. 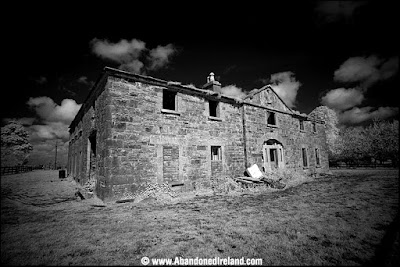 Dartfield in Co Galway … a house with links with a branch of the Comerford family I am trying to trace (Photograph: Abandoned Ireland)