Why is a statue of lame
Vulcan by a roadside
in rural west Limerick? 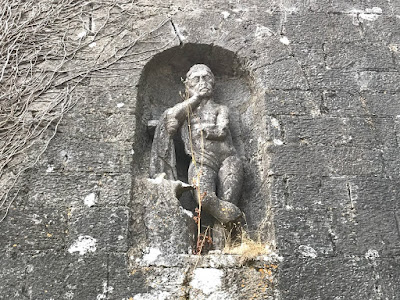 The carved limestone figure of Vulcan at Stoneville, known locally as the ‘Stony Man’ … said to be the work of Martin Scanlon of Blossomhill, Rathkeale (Photograph: Patrick Comerford, 2018)

In Roman mythology, Vulcan (Volcānus) was the god of fire, including the fire of volcanoes, metalworking, and the forge. He is often depicted with a blacksmith’s hammer. His Greek counterpart is Hephaestus, the god of fire and smithery. In time, Vulcan came to be considered the manufacturer of art, arms, iron and jewellery.

Roman tradition said the name of Vulcan was related to Latin words connected to lightning, which in turn was thought of as related to flames.

Some scholars have believed his name was related to Velchanos, a Cretan god of nature and the nether world. This was refuted by Wolfgang Meid, but more recently Gérard Capdeville has argued for a continuity between the Cretan Minoan god Velchanos and the Etruscan Velchans. The Minoan god’s identity was that of a young deity, master of fire and companion of the great goddess.

The stories of Vulcan may reflect the Greek myths of Theseus and the Minotaur and those about the childhood of Zeus on Mount Ida. Velchanos was depicted as a young man sitting upon a fork of a tree on coins from Phaistos dating from 322 to 300 BC, showing him as a god of vegetation and springtime. Later, Velchanos was depicted as a bull in the myths of Pasiphae and Europa.

The cult of Vulcan enjoyed a period of popularity in the Roman Empire during the second and third centuries and he god had a temple in Rome on the Aventine Hill. The festival of Vulcan, the Vulcanalia, was celebrated each year on 23 August, when the summer heat placed crops and granaries most at risk of burning.

The statue of Vulcan in West Limerick can be seen in Stoneville, on a back road between Rathkeale and Askeaton, and although it had been pointed out to me many months before I had forgotten its location until I came across accidentally on my way back from Newcastle West on Friday evening [6 July 2018], and again on my way from Rathkeale to Askeaton on Sunday afternoon [8 July 2018].

The carved limestone figure of Vulcan in the gable at Stoneville is marked in old maps as the ‘Vulcan’ on old maps and is known locally as the ‘Stony Man.’

He stands in a round-headed niche in the front or south wall of this detached two-bay, single-storey former forge. This former smithy is said to have been built around 1870, although some local historians suggest it is at least 100 years older, dating from the mid or late 18th century.

The statue is said to have been carved by Martin Scanlon, a craftsman born at Blossomhill, Rathkeale, in the 1740s. Even in the late 1700s, this figure would have been an expensive piece of work. It is a cut figure of a lame man working at an anvil, and in the past children regarded the Vulcan as a scary figure.

The Stoneville silver mines were just across the road, and some local historians suggest the building may have been the silversmiths’ workshop.

The old forge has a pitched slate roof and a rendered chimneystack. The dressed limestone curtain wall at the front or south elevation has cut limestone coping and the round-headed niche that holds the statue of Vulcan.

Below the statue and the niche is a pair of pointed arch door openings at the front, with cut limestone voussoirs, but these are now blocked up.

This former smithy is said to be one of the most remarkable examples of its type in Ireland. Although it is no longer use, this smithy, with its prominent site, is an important part of Co Limerick’s architectural heritage.

In this summer heat, crops and granaries may still be at risk. We are still six weeks away today from 23 August, the traditional day of the Vulcanalia. 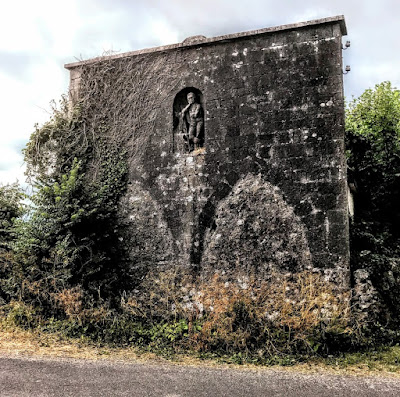 Thank you for this article, my late mother was born in this house, she always called it the stony man. She said there was a huge fireplace inside, with a bog oak mantle. There was room to sit inside the fireplace, where she used to sit and watch the stars.