Childhood and adult
memories of hurling in
Wexford and Limerick 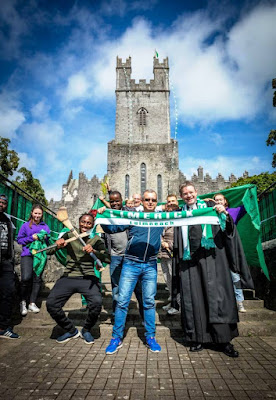 On the return journey from Ballybunion to Askeaton after lunch in Daroka and a walk on the beach this afternoon, every village and cluster of houses on the way back was still and quiet.

I imagine many people were preparing to watch the All-Ireland hurling final on television, had gone to the pub for the match, or had gone to watch it on the big screen in the centre of Newcastle West.

Perhaps a small number of fortunate people had even managed to wrangle tickets for Croke Park this afternoon.

Everywhere in Limerick city and country has been awash in green and white for the past fortnight or more, and despite the nail-biting close to the match with Galway, this is a day for great pride throughout Limerick.

We are in Ordinary time, and the liturgical colour is green. But someone still managed to ask me whether I was dressed in green and white to celebrate Limerick hurling. Saint Mary’s Cathedral, Limerick, turned green in the run-up to the hurling final, and today’s joy is shared throughout all sectors of Limerick society.

Watching the match in the Rectory in Askeaton this afternoon brought back many joyful memories of my own childhood fascination with hurling – a natural instinct for any boy with family roots in the south-east.

Rooting through old files and cuttings, I came across this ‘Irishman’s Diary’ I wrote for The Irish Times over 20 years ago, with memories of Wexford and Limerick hurling. It was published on 2 September 1996, the morning day the All-Ireland Hurling Final that year, when Wexford beat Limerick 1-13 to 0-14 in the final at Croke Park.

As a boy growing up in the 1950s, I was in awe of the Wexford hurlers, the Rackard brothers, and those epic teams in what Nicky Furlong describes as “the Greatest Hurling Decade”.

Those memories have been hallowed in Billy Roche’s play, Poor Beast in the Rain, and were brought to life again with yesterday's All Ireland Hurling Final against Limerick.

There is nothing to stir Wexford pride like watching the men in Purple and Gold or hearing the band strike up The Boys of Wexford and Boolavogue, and it is no coincidence that the associations between Wexford’s sporting achievements and the memories of 1798 should be recorded by the same local historian.

Nicky Furlong is the author of The Greatest Hurling Decade. But it is in his biography of Father John Murphy that he recalls the origins of a persistent tradition invoked by Wexford supporters against Kilkenny in inter county hurling matches.

A dejected Father Murphy and his exhausted supporters had trekked as far as north Kilkenny, and were betrayed as they slept on the hills of Kilcumney, duped into believing that they were being protected by the local colliers.

In all, Wexford have played 26 Leinster hurling finals against Kilkenny. And yet, the greatest abuse was reserved not for the Kilkenny supporters, but for Cork. And this was so because the memory of “Tom the Devil” was alive in Wexford century after the rising.

Thomas Honam, a sergeant with the North Cork militia earned his reputation as “Tom the Devil” for his expertise in torture and his perfection of the pitchcap. Old men who had their heads sheared and had been pitch capped as croppies were still to be seen in Co Wexford in the 1860s, and respect for them and the memory of “Tom the Devil” fired Wexford people in, the decade leading up to the first centenary of the rising.

In 1890, Castlebridge won the county hurling championship and so became the first Wexford team to play in an All Ireland Hurling Final. The 1890 final was played at Clonturk on November 16th, and Cork was represented by Augabullogue. Wexford were behind in the match but looked like drawing level with the prowess of two of their fiercest players, Tom Murphy and Will Neville. The Wexford supporters were emphatic when they accused the Cork supporters of being descendants of the North Cork Militia. As a ballad of the time puts it:

Tom Murphy and Will Neville
Began to lay them level,
When they thought of Tom the Devil,
With his pitch cap and his shears.

The Cork team were forced off the pitch by the Wexford jeers. But at that stage the scoreline stood at 1-6 to 2-2 against Wexford, and the unfinished match was awarded to Cork.

Wexford returned to Clonturk again for the 1891 final, played on February 28th, 1892. This time Crossabeg represented the county, and the team included, Tom Murphy and Will Neville once again. But Kerry's Ballyduff won 2-3 to 1-5 after a half hour’s extra play.

Wexford’s first All Ireland Hurling title was not won until 1910, when Castlebridge beat Limerick’s Castleconnel at Jones’s Road 7-0 to 6-2. Once again, the memory of 1798 must have been high in the minds of the Wexford supporters. Big, Jem Mythen of Monawilling, who scored the winning goal against, Limerick that year, has a special place in ’98 lore according to local historian Brian Cleary. And that place is recorded in Brian Cleary’s account of the Battle of Oulart in The Past, the journal of the Ui Cinsealaigh Historical Society.

As part of the 1948 commemorations for the 150th anniversary of the 1798 Rising, Jim Mythen, along with Paddy Sutton, Phil Quirke, Bud Farl and Ned Ryan, erected a monument in a corner of a field between Monawilling and Oulart, close to the place where tradition says Father John Murphy stood during the Battle of Oulart on Sunday, May 27th, 1798.

The monument stands close to Father Murphy’s Well, and according to Brian Cleary, the monument, the well and the entire battle area at Oulart are being included in the Sli Charman, the long walk planned across Co Wexford.

After their 1910 victory over Limerick, the Wexford hurlers had to wait until 1918 to return to an All Ireland hurling final.

Once again, they faced Limerick, but the Wexford selection was trounced 9-5 to 1-3 by Newcastle West.

Defeat was sweetened that year by Wexford’s sixth successive appearance in an All Ireland Senior Football final and the fourth successive football title won for the county by the Blues and Whites of Wexford town: having been defeated by Kerry in 1913 and 1914, Wexford won four times in a row from 1915.

With these record breaking exploits, hurling took second place to football throughout the 1920s, the 1930s and well into the 1940s. In 1948, the Wexford final with a team that included Nicky Rackard. But Wexford's greatest triumph that year was to see a football tournament organised to coincide with the 150th anniversary commemorations of 1798. By coincidence, Wexford reached the final, which was not played until 1949, when the team, with Martin Comerford in goal, was defeated in front of 36,000 by three points by mighty Meath.

Few could have foreseen the great revival in Wexford hurling that year too. The dual football and hurling heroes of the county included Nicky Rackard, Mick Hanlon, Padge Kehoe, Bobby Donovan, and Sam “Wilkie” Thorpe from Vinegar Hill.

Hurling fever swept the whole county in the early 1950s. Even Wexford town, until then a football stronghold, saw the founding of its first hurling team at Faythe Harriers. Nicky Furlong recalls how he even togged out as centre forward in the blue and black of Wexford Wanderers Rugby Football Club for an unofficial match against Young Irelands at Park Lane.

There were All Ireland hurling victories again in 1960 and 1968 against Tipperary. But there was no glory for the county like the stunning records of the 1910s and the 1950s.