‘Winding your way down on Baker Street
… The sun is shining, it’s a new morning’ 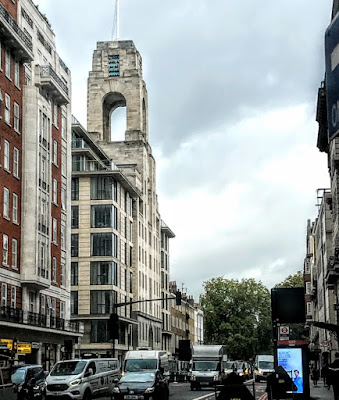 ‘Winding your way down on Baker Street’ … traffic winding its way down Baker Street this week (Photograph: Patrick Comerford, 2018)

I have passed by Baker Street in London many times, and I have been on the Bakerloo Line, but finding my way along Baker Street yesterday [19 September 2018] on my way to and from the meeting of USPG trustees left the tune of ‘Baker Street’ in my head for the rest of the day.

‘Baker Street’ is the most popular song written and recorded by the Scottish singer-songwriter Gerry Rafferty. It was released as a single in 1978, and the arrangement is still known 40 years later for its saxophone riff.

Gerry Rafferty also received the Ivor Novello Award for the Best Song Musically and Lyrically that year for ‘Baker Street.’ In 2010, the song was recognised by BMI for surpassing five million performances worldwide, and it was awarded Gold Certification twice, in 1978 and in 2013, by the BPI.

Gerry Rafferty (1947-2011) was a Scottish singer-songwriter and is known not only for ‘Baker Street,’ but also for ‘Right Down the Line’ and ‘Night Owl,’ as well as ‘Stuck in the Middle with You,’ recorded with the band Stealers Wheel.

He was born into a working-class family of Irish origins in Paisley, Renfrewshire. His mother taught him both Irish and Scottish folk songs as a boy, and later he was influenced by the music of the Beatles and Bob Dylan.

He joined the folk-pop group the Humblebums in 1969. After they disbanded, he recorded his first solo album, Can I Have My Money Back?, in 1971. Rafferty and Joe Egan formed the group Stealers Wheel in 1972 and they recorded several hits, including ‘Stuck in the Middle with You’ and ‘Star.’

In 1978, he recorded his second solo album, City to City, which included ‘Baker Street,’ which became his most popular song.

City to City was his first release after he had resolved legal problems created by the break-up of Stealers Wheel in 1975. In the three years in-between, he was unable to release any material because of disputes over the band’s recording contracts.

Rafferty wrote ‘Baker Street’ during a time when he was trying to free himself from those Stealers Wheel contracts. He travelled regularly between his family home in Paisley and London, where he often stayed at a friend’s flat on Baker Street.

As Rafferty put it, ‘everybody was suing each other, so I spent a lot of time on the overnight train from Paisley to London for meetings with lawyers. I knew a guy who lived in a little flat off Baker Street. We’d sit and chat or play guitar there through the night.’ 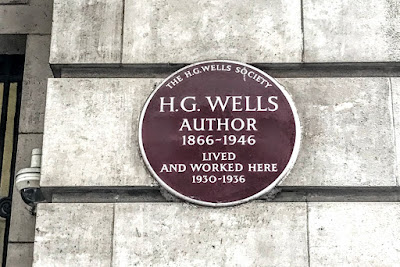 Baker Street was the home of many famous writers and composers in the 20th century, including HG Wells and Eric Coates (Photograph: Patrick Comerford, 2018)

‘Baker Street Muse’ is a song on Jethro Tull’s album Minstrel in the Gallery, released in 1975, three years earlier that Gerry Rafferty’s ‘Baker Street,’ and Baker Street is frequently mentioned in the lyrics of Jethro Tull songs.

In those three years, privately, Rafferty also spent a lot of time drinking, and refers to this in the lyrics, ‘light in your head and dead on your feet.’

The resolution of Rafferty’s legal and financial frustrations accounted for the exhilaration of the song’s last verse:

Rafferty’s daughter Martha has said that the song was also inspired by the book he was reading at the time, The Outsider (1956) by Colin Wilson (1931-2013). As he was travelling between Glasgow and London, Rafferty was reading this book, which explores ideas of alienation and of creativity, born out of a longing to be connected.

The album City to City (1978) was co-produced by Rafferty and Hugh Murphy. In addition to a guitar solo, played by Hugh Burns, ‘Baker Street’ features a prominent eight-bar saxophone riff played by Raphael Ravenscroft as a break between verses.

Ravenscroft recorded the break using the alto saxophone he had in his car. The part led to what became known as ‘the Baker Street phenomenon’ – a resurgence in the sales of saxophones and their use in mainstream pop music and television advertising.

Ravenscroft has said recently he thinks the solo is out of tune. He adds that he was not able to re-record the take because he was not involved when the song was mixed.

According to one story, Ravenscroft received no payment for a song that went on to earn Rafferty £80,000 a year. A £27 cheque given to Ravenscroft bounced and was framed and hung on his solicitor’s wall. However, story of the bouncing cheque was denied by Ravenscroft in a BBC interview in 2012. 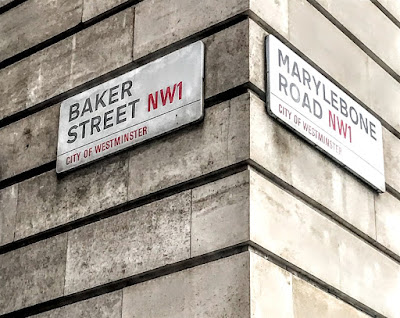 On the corner of Baker Street and Marylebone Road on my way to a meeting (Patrick Comerford, 2018)

Winding your way down on Baker Street
Light in your head and dead on your feet
Well, another crazy day
You’ll drink the night away
And forget about everything

This city desert makes you feel so cold
It’s got so many people, but it’s got no soul
And it’s taken you so long
To find out you were wrong
When you thought it held everything

Way down the street there’s a light in his place
He opens the door, he’s got that look on his face
And he asks you where you’ve been
You tell him who you’ve seen
And you talk about anything