What three things would
you take with you if a fire
broke out in your house? 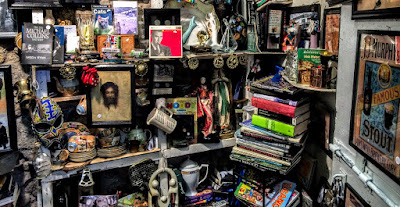 ‘Sell what you own, and give the money to the poor, and you will have treasure in heaven’ (Mark 10: 21) … a market stall in Blackrock, Co Dublin (Photograph: Patrick Comerford)

During her sermon preparation last week, Archdeacon Ruth Elmes asked on Facebook: ‘If a fire broke out in your house, what three possessions would you grab?’

The answers she got were interesting. People included their laptop (with their photographs), their phone, their keys, their wallet or purse with their plastic cards, and their passport.

What would you take with you?

What do we cling to?

I have a large collection of old banknotes. There is enough there to make me a millionaire or even a multimillionaire in Weimar Germany, war-time Greece and Ceausescu’s Romania. But in reality they are worth nothing today and would earn no interest apart from the interest they might have for collectors.

They were in circulation at times when inflation became rampant in all three countries at times of crisis in Europe. Had they been spent at the time they were issued they might have bought something of value; had they been given away in their day, they might have helped the poor and the hungry.

But circumstances saw to it that those who became attached to their wealth on paper would lose all they had.

Our readings this morning challenge us to think again what we cling to and what are our true values.

Do Job’s prosperity and his sense of value and well-being depend on finding God’s favour expressed in his wealth and his prosperity?

Does the faith of the recipients of the Letter to the Hebrews falter when it produces no discernible results in terms of our temporal blessings?

Does the faith of the man who falls down before Christ in the Gospel reading depend on his own wealth and money?

When our prosperity and wealth disappear, like the fast-fading value of those banknotes, are we in danger of feeling abandoned by God?

How would we grab our faith and take it with us if we rushed to escape a crisis? 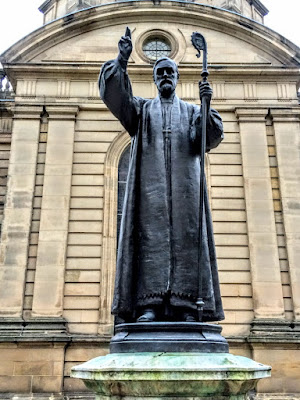 But formidable theologians are also allowed to play pranks on the unsuspecting. It is told that Charles Gore loved to play a particular prank on friends and family members when he was a canon of Westminster Abbey.

He would enjoy showing visitors the tomb of one of his collateral ancestors, the 3rd Earl of Kerry, with an inscription that ends with the words, highlighted in black letters and in double quotation marks: ‘hang all the law and the prophets.’

On closer inspection, he would point out, the words are preceded by ‘… ever studious to fulfil those two great commandments on which he had been taught by his divine Master … hang all the law and the prophets.’

Francis Thomas FitzMaurice (1740-1818) was a rich young man, for he was a child of only seven when his father died and he inherited not only the family title as 3rd Earl of Kerry but also vast estates, including 20,000 acres in Lixnaw, Co Kerry. But this rich young man sold off all that he had when he was still in his 40s, mainly to the Hare family of Listowel.

A widowed and a sad man, he spent the rest of his days in London. When he died in 1818, he was buried in Westminster Abbey and his family’s immediate connections with Co Kerry, dating back to the 13th century, came to an end. 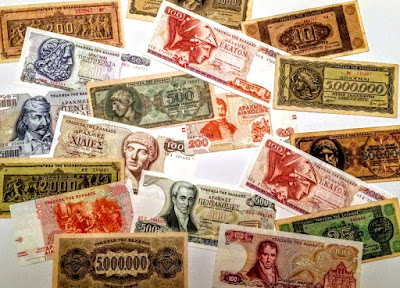 ‘Sell what you own, and give the money to the poor, and you will have treasure in heaven’ (Mark 10: 21) … a collection of old Greek banknotes (Photograph: Patrick Comerford)

In the Gospel reading, the man runs up to Jesus, and falls on his kneels as if in adoration, or like a servant before a master, and asks what he should do to inherit eternal life.

Christ’s response is cautious. When he puts some of the Ten Commandments to this man, the man insists that since his youth he has observed those commandments dealing with our relationships with others, those commandments that prohibit murder, adultery, theft, lying and fraud, and that call on us to honour parents and the elderly.

However, a closer look at the list of the second grouping of commandments shows that Jesus replaces the last commandment, You shall not covet your neighbour’s wife or goods (Exodus 20: 17), with the words ‘You shall not defraud.’

The full censure says: ‘You shall not defraud your neighbour; you shall not steal; and you shall not keep for yourself the wages of a labourer until morning’ (Leviticus 19: 13).

And why did the man slink away? Because he had much property (verse 22).

What acts as a ball and chain that holds us back in our lives today, leaving us not fully free to follow Jesus? I may not have much property. But is there something else that I need to shed, in my attitudes, values, habits, behaviour, priorities, use of time, commitment or lack of commitment?

In his compassion, Christ sees this man’s weakness. He has emphasised his relationship with others. But is this founded on his desire for personal salvation, some sort of personal version of the concept of ‘karma’?

What about his relationship with God?

Does he trust in God because God is God, rather than because of what God can do for him?

Are we in danger at times of thinking that we are entitled to our place in the Kingdom of God?

And in our behaviour, as well as our prayers, do we let God know, and others know, this?

Christ comes to the quick when he points out that this young man puts his trust in his own piety and wealth, in his achievements, in his inherited status. But wealth stands in the way of his relationship with God.

So, Christ tests the man. If he truly loves the poor, he will make a connection between loving God and loving others. The man is shocked and makes quick his departure. 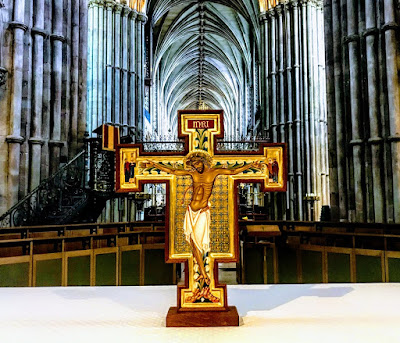 ‘My God, my God, why have you forsaken me?’ (Psalm 22: 1) … words repeated by the dying Christ on the Cross … a cross on the nave altar in Lichfield Cathedral (Photograph: Patrick Comerford, 2018)

This rich young man may lack nothing, but he wants eternal life. Yet he fails to realise he has met the living God face-to-face, and he turns away.

When the real challenge is put to him, he may well have repeated the words in our psalm: ‘My God, my God, why have you forsaken me?’ (Psalm 22: 1).

When the real challenge is put to him, he may as well have thought: ‘Hang all the law and the prophets.’

We cannot save ourselves, but God can save us. However, Peter’s implied question (verse 28) points out again how easy it is to think that being a disciple or follower of Christ should be linked with the hope of rewards in the here and now.

I find I have to ask myself again after reading this Gospel passage What do I cling onto most now that I can shed – not in terms of property and possessions, but prejudices and values – that get between me and Jesus, and between the way I live now and eternal life. 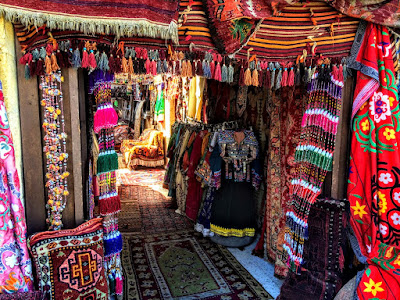 ‘Sell what you own, and give the money to the poor, and you will have treasure in heaven’ … in the market in Goreme in Cappadocia (Photograph: Patrick Comerford) 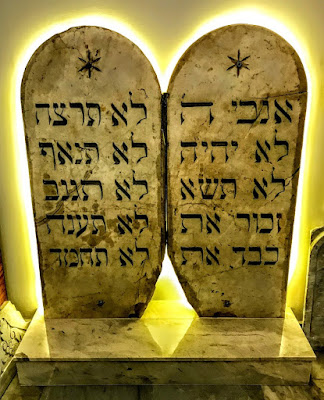 ‘You know the commandments’ … ‘Teacher, I have kept all these since my youth’ (Mark 10: 19-20) … the Ten Commandments on carved stones on display in a synagogue in Thessaloniki (Photograph: Patrick Comerford, 2018)

Almighty God,
whose Holy Spirit equips your Church with a rich variety of gifts:
Grant us so to use them that, living the gospel of Christ
and eager to do your will,
we may share with the whole creation in the joys of eternal life;
through Jesus Christ our Lord. 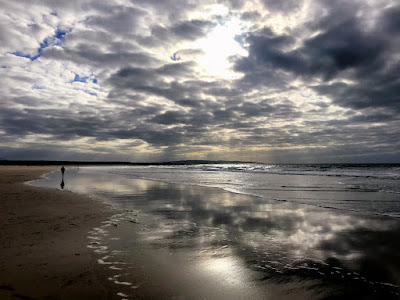 ‘Grant … that, living the gospel of Christ and eager to do your will, we may share with the whole creation in the joys of eternal life’ (The Collect) … on the beach in Ballybunion, Co Kerry (Photograph: Patrick Comerford, 2018) 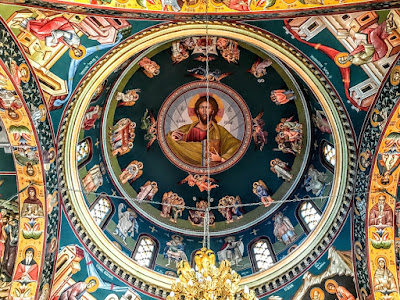 ‘Oh, that I knew where I might find him, that I might come even to his dwelling!’ (Job 23: 3) … Christ the Pantocrator in the dome of the church in Georgiopouli in Crete (Photograph: Patrick Comerford, 2018)