Stories of division from
an old Cold War frontier 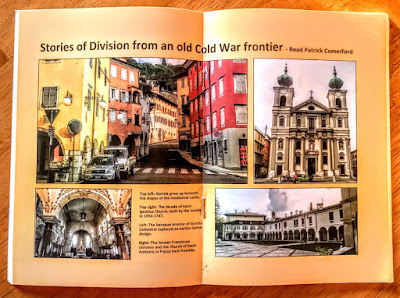 My monthly features in two diocesan magazines, the Church Review (Dublin and Glendalough) and the Diocesan Magazine (Cashel, Ferns and Ossory) continue this month [January 2019] with a look at the twin border towns of Gorizia and Gorica, near Venice.

In my first column of the New Year in these magazines, I visit the former ‘Cold War’ frontier between Italy and Slovenia, that was drawn down through one town in 1947, It was a straight line that cut through squares, streets and gardens, ignoring the natural contours of streets and buildings.

The frontier remained in place until Slovenia became part of the Schengen Agreement in 2007.

The first edition of the Church Review and the Diocesan Magazine for this new year are available in churches tomorrow [6 January 2019]. And there’s more about Gorizia on this blog tomorrow afternoon.