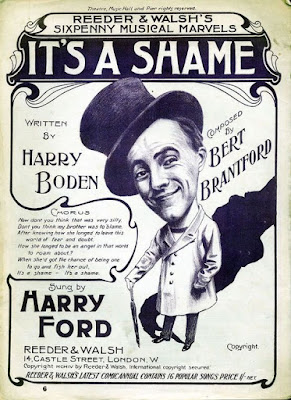 An interesting Comerford family in London was associated with the theatre music halls and movies at the end of the 19th century and for much of the first half of the 20th century.

Albert (Bert) Alfred G Comerford was a composer who used the stage name Bert Brantford. He was born in London on 23 December 1879. He played a significant supporting role for his brother, composing many of his songs. Bert’s wife, Agnes Violet (Aggie) Sipple, was an actor who used the stage name Agnes Brantford. She was known for her roles in a number of films, including Everything is Rhythm (1936), A Will and a Way (1922) and The Last Post (1929).

Bert Comerford and Aggie Brantford were was the parents of two actors who also used the stage name Brantford: Michael Richard Henry Comerford (1912-1984), who starred as ‘Mickey Brantford’, and Agnes Violet Rebecca Comerford (1915-2008), who as a child actor with the name ‘Aggie Brantford’ had roles in Second to None (1927) and Carry On! (1927)

But the family is also interesting because the Sipple sisters who married the Comerford brothers are descended from some of the most interesting Sephardi Jewish families in Europe. Many of their immediate ancestors were married in the Bevis Marks Synagogue in London, and they could trace their ancestry directly to leading Sephardi families who lived in Amsterdam, Livorno, Venice and Seville, including Spanish Marrano families who had been forced to convert to Christianity in Seville during the Inquisition but had maintained their Jewish faith and practices in their private family and domestic life.

1, John James Sipple (1853-1905), comedian, actor, born Blackfriars, London, in 1853, of whom next.
2, Henry Sipple, aged 28 in 1891, born in Whitechapel, described in the census as ‘imbecile,’ and living with his widowed mother in West Derby, Liverpool.
3, Agnes Ann (Sipple) Nolan, who used the stage name Agnes Hazel. She seems to have married her first husband Edward Scott in Sunderland in 1884 and to have had a son Herbert Scott, who was born in Newcastle ca 1886 and who was living with his grandmother, aged 5, in 1891. Agnes moved to Australia and was living in Melbourne at the time of her mother’s death in 1895. There she married the comedian and music hall star Michael Nolan, who died in January 1910. Their children included a son and daughter:
● 1a, Herbert (Bert) Nolan.
● 2a, Agnes (Aggie) Nolan.

The eldest son in this family was:

They were the parents of five children: 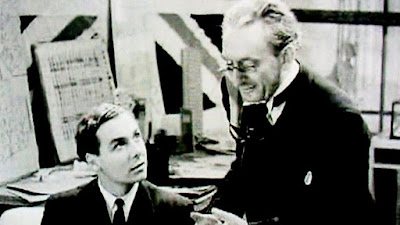 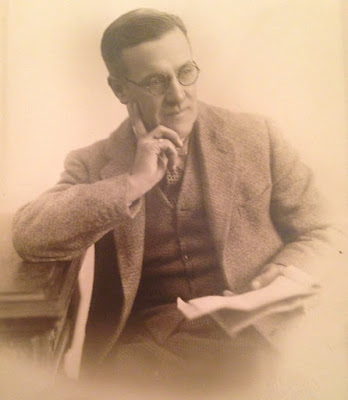 Harry made his first appearance on stage as a boy in 1887 at the Elephant and Castle Theatre. His first music hall performance was at the Middlesex Music Hall in a sketch called Young Fred, and he went on to became a music hall star. He sang some of the most original and amusing songs the halls had ever heard and his brother, Bert Comerford, played a significant supporting role as composer of many of those songs.

Although Harry was at his peak while the likes of Dan Leno, Marie Lloyd and George Robey dominated bill-topping positions at the Tivoli, Oxford, and the Pavilion, London, he regularly took his place on these bills for several years in the late 1890s and early 1900s and held his own. Indeed, at the London Pavilion in particular, he was a recognised favourite for many years. He frequently did top bills throughout London, as well as in the major provincial cities. The Variety Theatre once described him as a true star of the Metropolis.

Harry Comerford (Harry Ford) and his wife Rosina Sipple were the parents of two daughters and three sons:

Harry Comerford was a brother of:

Albert (Bert) Alfred George Comerford (1879-1973) was a brother of Harry Comerford (Harry Ford). He used the stage name of Bert Brantford. He was born at 30 Henshaw Sttreet, Newington, Lambeth, London, on 23 December 1879. He married Agnes Violet (Aggie) Sipple (1884-1965), sister of Rosina (Sipple) Comerford. Aggie was born on 30 October 1884 in Dundee, Scotland. She was aged 7 in 1891 and was living with her parents and grandmother in West Derby, Liverpool.

Bert Comerford died in Richmond upon Thames in June 1973; Agnes Brantford died in 1965. They were the parents of three children:

Michael Richard Henry Comerford (1912-1984) was an actor and film production manager who worked with the stage name of Mickey Brantford. He was born on 26 March 1912 in Brixton, London, into this theatrical family.

He began his acting career at the age of three and as a popular child actor in the silent film era in the 1920s and 1930s. He appeared in a series of Sexton Blake shorts as the detective’s assistant, Tinker. He was known for Suspense (1930), The Stolen Necklace (1933) and Strictly Illegal (1935). He died on 18 October 1984 in Buckinghamshire. 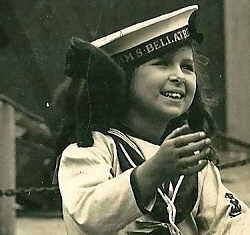 Aggie Brantford, or Jackie Comerford, in ‘Second to None’ (1927) 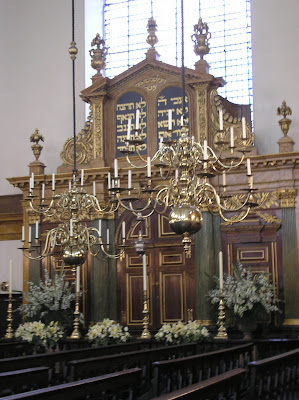 The Aron haKodesh or Holy Ark for the Torah scrolls in the Bevis Marks Synagogue … many of the ancestors of the Comerford (Sipple) sisters were married here in the 18th and 19th centuries (Photograph: Devor Avi/Wikipedia)

The Asher and Cohen families:

Dove married her second husband, Abraham Ottolenghi, on 28 May 1847. The Ottolenghi (Ottolengo) Jewish Italian family in Piedmont apparently originated in Germany, and the name is an Italian form of Ettlingen. Prominent members of the family include: Joseph b Nathan Ottolenghi (died 1570), Rabbi of Cremona; Samuel David b Jehiel Ottolego (died 1718), scholar and kabbalist, born in Casale Monferrato; and Abraham Azariah (Bonaiuto) Ottolenghi (1776-1851), rabbinical scholar, born in Acqui.

Dove and her first husband Moses A’Cohen were the parents of:

Elizabeth (Bessie or Betsy) Asher (1858-1935), who was born in London 1858. She performed on the stage at a very early age. Bessie married John James Sipple in 1876. Their children included two daughters who married two Comerford brothers:

The Mendoza and Tubi families:

While the Asher family were Ashkenazi Jews, Rosina Sarah (Sipple) Comerford and her sister Agnes Violet (Sipple) Comerford were descended through their grandmother’s family from some of the most interesting Sephardi families in Spain, Venice and Livorno (Leghorn) in Tuscany. As I researched the story of this branch of the Comerford family, I was particularly moved by this detail, having visited the synagogues and ghetto in Venice last November, and followed the Jewish trails through the former Jewish quarter in Seville the month before.

The history of the Jewish community in Livorno begins with the history of the town itself. The first stone was for building the city and port of Livorno was laid in 1577. To populate the new town, the Grand Duke Ferdinando I de Medici of Tuscany issued edicts known as the Livornine in 1591-1593, providing new immigrants with tax exemptions, some immunities and complete religious freedom. Jewish, Turkish and Moorish merchants were expressly invited to move to the town. Jews could own houses, open shops in all parts of the city, study at the university and did not have to wear the Jewish badge.

Thanks to these provisions and Livorno’s central position in the Mediterranean, Jews flocked in the port and the Jewish population soon reached one eight of the entire population of the town.

Because most of these new settlers were Marranos and Levantines, Spanish became the official language of the Jewish community in Livorno. These Jews kept contacts with their places of origin, and their cultural and commercial contacts and trade networks throughout the Mediterranean lasted for centuries.

In 1765, more than one-third of the 150 largest commercial houses in Livorno were owned by Jews. For 300 years Livorno, ‘the city without a ghetto,’ was a point of reference for the Diaspora. But after Napoleonic capture, the port of Livorno declined in commercial importance and the Jewish population dwindled in numbers.

David de Mendoza (1650-1730) of Jaén was a Marrano or a member of a Jewish family that had converted publicly to Christianity at the Inquisition but continued to practice Judaism privately. Jaén is about 90 km north of Granada, 100 km east of Cordoba, and 240 km east of Seville. He married Abigail David de la Penha Castro (1665-1751), daughter of David Haim Joseph de la Penha Castro and Gracia de Ledesma. They moved from Seville to Amsterdam, where he died on 22 December 1730, and she died on 13 July 1751.

Their children included a daughter:

Abigail Aaron Mendoza (1744-1810), who was born in Livorno in 1744 and died in London in 1810. She married Isaac Moses Abraham Martin Nunes Martinez (1745-1841). They were the grandparents of Sara (A’Cohen) Asher, the grandmother of Aggie Comerford and Rosina Comerford. 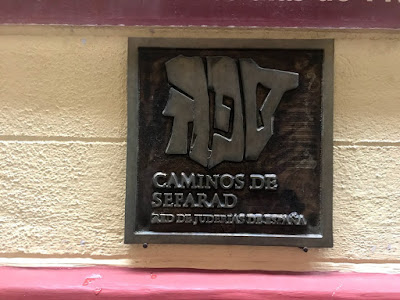 Following the Caminos de Sefarad or Sephardic trail in the former Jewish Quarter in Seville … David de Mendoza’s family moved from Seville to Amsterdam, and then to London (Photograph: Patrick Comerford, 2018)