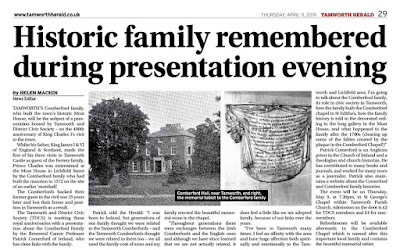 This report by Helen Machin is published in the ‘Tamworth Herald’:

Tamworth’s Comberford family, who built the town’s historic Moat House, will be the subject of a presentation hosted by Tamworth and District Civic Society – on the 400th anniversary of King Charles I’s visit to the town.

Whilst his father, King James I & VI of England & Scotland, made the first of his visits to Tamworth Castle as guest of the Ferrers family, Prince Charles was entertained at the Moat House in Lichfield Street by the Comberford family who had built the mansion in 1572 on the site of an earlier ‘motehall.’

The Comberfords backed their former guest in the civil war 25 years later and lost their home and position in Tamworth as a result.

The Tamworth and District Civic Society (TDCS) is marking these royal anniversaries with a presentation on the Comberford Family by the Reverend Canon Professor Patrick Comerford of Ireland, who has close link with the family.

“Throughout generations there were exchanges between the Irish Comberfords and the English ones and although we have since learned that we are not actually related, it does feel a little like we are adopted families, because of our links over the tears.

“I’ve been to Tamworth many times, I feel an affinity with the area and have huge affection both spiritually and emotionally to the Tamworth and Lichfield area. I’m going to talk about the Comberford family, its role in civic society in Tamworth, how the family built the Comberford chapel in St Editha’s, how the family history is told in the decorated ceiling in the Moat House, and what has happened to the family after the 1700s (clearing up some of the fables created by the plaque in the Comberford Chapel!)”

Patrick Comerford is an Anglican priest in the Church of Ireland and a theologian and church historian. He has contributed to many books and journals, and worked for many years as a journalist. Patrick also maintains a website about the Comerford and Comberford family histories.

The event will be on Thursday, May 9, at 7.30 pm, in St George’s Chapel within Tamworth Parish Church. Admission on the door is £2 for TDCS members and £4 for non-members.

Refreshments will be available in the Comberford Chapel, which is named after this important local family and contains the beautiful memorial tablet.