Houses, a bridge and
a sculpture that recall
the growth of Fermoy 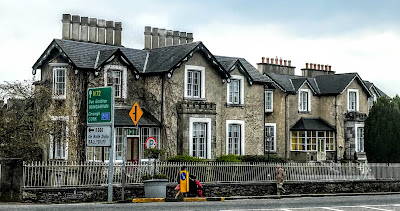 One of the stained-glass windows in the south transept of Christ Church, the Church of Ireland parish church in Fermoy, commemorates Sir George Samuel Abercromby (1824-1872).

The Abercromby family estates were mainly in Birkenbog and Forglen in Scotland, and the main family seat was Forglen House, north-west of Turriff in Aberdeenshire. But the family also had large estates in Ireland. In the early 19th century, Sir George’s father, Sir Robert Abercromby (1784-1855), bought most of the town of Fermoy when his fellow Scotsman John Anderson (1747-1820), went bankrupt before he died.

Sir George’s son, Sir Robert John Abercromby (1850-1895), who placed this window in Christ Church, owned Fermoy House and 434 acres of land in Co Cork in the 1870s. His mother, Agnes Georgina Browne, Lady Abercromby, who is referred to on the window without being named, was a daughter of John Cavendish Browne (1794-1873), 3rd Baron Kilmaine, of Gaulstown House, Co Westmeath.

The Abercromby family also gave their name to Abercromby Place in Fermoy, a pair of Tudor revival houses built ca 1850 that form an imposing feature on the Fermoy streetscape, facing the entrance to Fermoy House and standing on the east side of the street, between Christ Church and the bridge over the River Blackwater.

One house is now the offices of James Walsh and Son Solicitors, while Abbeyville House on the south side of this pair is now a guesthouse. They are set back from the street and share a site bounded by rubble stone and rendered walls with cut limestone coping and decorative cast-iron railings.

These houses are in a prominent location in the town, and their Tudor Revival style is unusual for urban architecture in Ireland. This makes them an interesting feature on the street of Fermoy. Both houses have been tastefully refurbished using sympathetic materials.

Their timber bargeboards are well executed and typical of the style. They add decorative interest to the houses and the form and appearance of the buildings are further enlivened by architectural features such as the oriel windows, crenellated projections and glazed porches.

The Tudor Revival style is carried through in the steeply gabled bays and the middle projections. The two houses are linked by a rendered wall with a crenellated parapet and dressed limestone coping and cornice, and triangular-headed openings to each end with a timber panelled door and a dressed limestone cornice above. 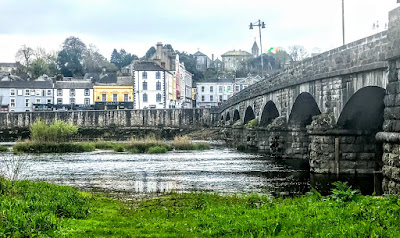 The seven-arch bridge over the River Blackwater at Fermoy (Photograph: Patrick Comerford, 2019)

Closeby, the River Blackwater is crossed by Fermoy Bridge, a seven-arch limestone road bridge first built on the site of late 16th and 17th century bridges that replaced a mediaeval ferry.

Abraham Addison Hargreave, the architect who designed Christ Church in 1809, was commissioned by John Anderson, who built Fermoy Town, to widen the 1689 bridge about the same time as the church was built.

His grandson, Joshua Hargreave, rebuilt the bridge in 1864-1865 to a design by the railway engineer Andrew Oliver Lyons (1827-1902). Until recently, this bridge carried the main Dublin-Cork road.

Across from Abercromby Place, the gates of Fermoy House stand at the entrance to Fermoy House, built by Anderson in 1820 but long since demolished. 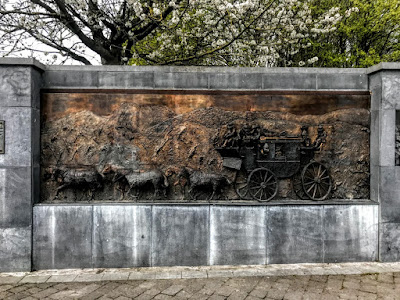 A modern sculpture at the gates of Fermoy House recalls the pioneering work of John Anderson (Photograph: Patrick Comerford, 2019)