Christ’s three questions
challenge our idea of fame,
of heaven, and of success 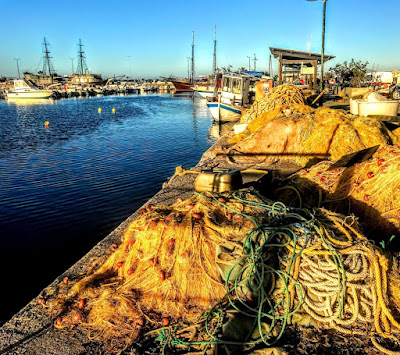 ‘Cast the net to the right side of the boat and you will find some [fish]’ (John 21: 6) … a fishing boat with its nets to the right at the harbour in Rethymnon last week (Photograph: Patrick Comerford, 2019)

Question 1, What is your idea of fame?

When I was a child, just as I was about to become a teenager, I became a keen autograph collector.

My uncle, who was my godfather, bought me an autograph book, and I set about earnestly seeking the autographs of great footballers, pop singers, movie stars – and my first girlfriend and my school friends – in the early 1960s.

The pop stars stopped being No 1 hits just as my taste in music matured. The footballers aged as I became more interested in rugby and cricket. The movie stars’ fame faded as my interests shifted to literature and poetry. My first girlfriend lost interest in me. I moved town, changed schools, lost touch with many childhood friends, and I lost that autograph book about the same time.

But I remember basking in the light of Bobbie Charlton and Brendan Bowyer for a few weeks in the schoolyard. I suppose it was a sort of vicarious fame.

I suppose we never really stop behaving like that as adults with our own adult versions of autograph-hunting: asking authors to sign books … standing in for ‘selfies’ with the good and the great …

Who do you recognise, and who recognises you?

If I encountered the Risen Christ in this post-Easter season, would I, like Saint Paul in our first reading, fall to the ground blinded, and ask, ‘Who are you, Lord?’ (see Acts 9: 5)

Would you recognise Jesus on that seashore that Easter morning?

Where do you see Jesus this morning?

I was in Crete for the week after Easter, enjoying walks each day along the beach at Platanias near Rethymnon. But even there, I wondered: Where do the refugees see Jesus when they land on the shores of more distant Greek islands such as Lesbos and Samos?

I certainly hope they see the love of Jesus in the work of mission agencies such as USPG and other church groups and humanitarian organisations, on the shore, in their plight.

When these refugees look at those workers on those islands, I hope they see the image of Christ, the likeness of the Lamb, an image of the Good Shepherd. 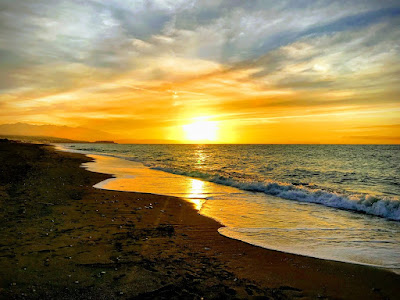 Would you recognise Jesus on the beach that Easter morning? (see John 21: 4) … the beach at Platanias near Rethymnon last week (Photograph: Patrick Comerford, 2019)

Question 2, What is your idea of heaven?

In our reading from the Book of Revelation, Saint John in exile on Patmos catches a glimpse of the heavenly future when he looks up and hears the angels gathered around the Lamb on the Throne and singing:

‘To the one seated on the throne and to the Lamb
be blessing and honour and glory and might
for ever and ever!’

During my reflections on Good Friday in Saint Mary’s Church, Askeaton, I shared how there are places where I think I am given a little glimpse of what heaven must be like. They include the road from Iraklion to Rethymnon in Crete, facing the sun as it sets in the Mediterranean, and where I spent that week after Easter.

But what is your idea of heaven? … Fishing, Golf, Horses, a day’s sailing?

The refugees who arrive on our shores are fleeing their own hell on earth. Are they going to catch a glimpse of heaven on earth when they arrive?

Or do they find we have priorities other than the Kingdom of God? 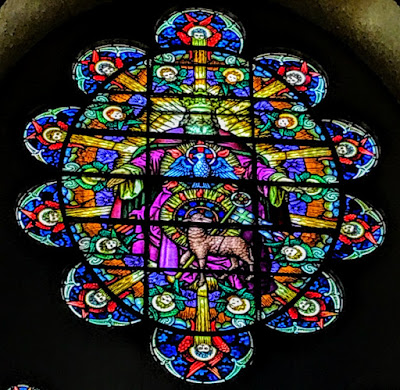 The Lamb of God in a Trinitarian depiction in a stained-glass window in a church in Charleville, Co Cork … see Revelation 5: 11-14 (Photograph: Patrick Comerford, 2018)

Question 3, What do you mean by success?

The disciples that Sunday morning are not very successful, are they (John 21: 3)? So unsuccessful, indeed, that they are willing to take advice from someone they do not even recognise (verse 4 ff).

The disciples are at the Sea of Galilee or the Sea of Tiberias, back at their old jobs as fishermen. Peter, who denied Christ three times during his Passion, Thomas, who had initially doubted the stories of the Resurrection (see John 20: 24-29), Nathanael, who once wondered whether anything good could come from Nazareth (see John 1: 46), James and John, the sons of Zebedee, who once wanted to be so close to him that they wanted to be seated at his right hand and his left in the kingdom, and two other disciples who remain unnamed … how about that for fame, lasting recognition and success?

They are back on the same shore where there once were so many fish, so much bread left over after feeding the multitude, that they filled 12 baskets (John 6: 1-13). There are not so many fish around this time, at first. But then John tells us that after Christ arrives 153 fish were caught that morning (verse 11).

This number is probably a symbol meaning a complete number. The number 153 is divisible by the sum of its own digits, and it is the smallest number that can be expressed as the sum of cubes of its digits, since 153 = 13 + 53 + 33. Aristotle is said to have taught that there were 153 different species of fish in the Mediterranean.

Whatever they say, the disciples must have thought they had managed the perfect catch that morning.

To eat with the Risen Lord and to invite others to the Heavenly Banquet, so that every creature in heaven and on earth and under the earth and in the sea can say ‘Amen’ before the Throne of God … now that is what I call success (Revelation 5: 11-14). 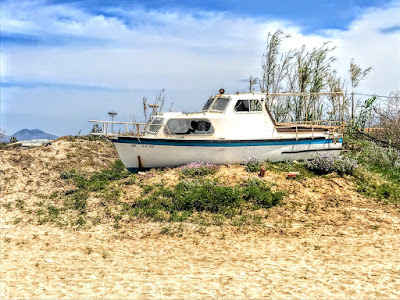 Beached … an old fishing boat on the sands at Platanias, near Rethymnon in Crete (Photograph: Patrick Comerford, 2019)

The Lamb of God in a depiction in a stained-glass window in a church in Roscrea, Co Tipperary (Photograph: Patrick Comerford, 2018) 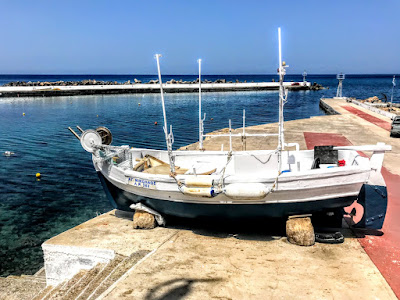 A fishing boat at the harbour in Panormos, east of Rethymnon, last Sunday (Photograph: Patrick Comerford, 2019)

Scripture quotations are taken from the New Revised Standard Version Bible Anglicised Edition, copyright © 1989 by the Division of Christian Education of the National Council of Churches of Christ in the USA, and are used by permission. All rights reserved.