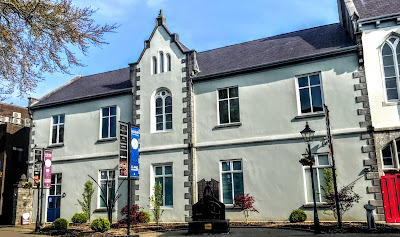 Clare Museum is housed in part of the former Sisters of Mercy convent and school in Ennis, Co Clare (Photograph: Patrick Comerford, 2019)

As Easter approached, I took a short time off to visit the Clare Museum in Ennis, which is in the former Convent of the Sisters of Mercy in the centre of Ennis.

The museum building in was originally a convent school and chapel dating from 1854. 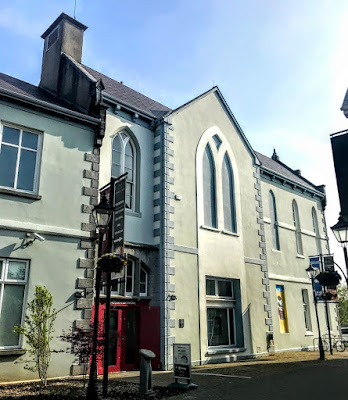 The site of the Sisters of Mercy convent and school was once the home of the lawyer Charles O’Connell (Photograph: Patrick Comerford, 2019)

They bought Rowe House and four other houses in Arthur’s Row, where they established Saint Xavier’s Convent. Arthur’s Row is named after the Arthur family, a Limerick merchant and political family who also gave their name to Arthur’s Quay in Limerick. Members of the Arthur family were Mayors of Limerick on 61 occasions between 1218 and 1635. Anne Arthur O’Brien was Mayor of Ennis in 1987 and 1988.

The foundation stone of the school and convent for the Sisters of Mercy was laid on 11 April 1861, and most of the building was completed by 1865. A chapel and classrooms were added in 1869.

The architect was Maurice Fitzgerald of Market Street, Ennis, who was active in the 1850s and 1860s.

A new gable-fronted Gothic Revival convent chapel was built in 1895, and had lancet windows with stained glass by Meyer of Munich, depicting the ‘Corporal Works of Mercy.’ 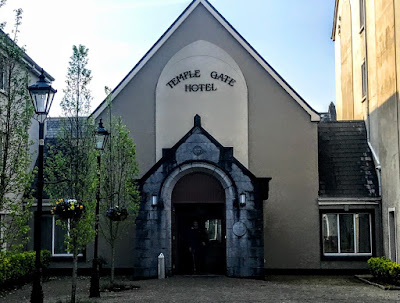 The porch of the convent has been incorporated into the entrance lobby and bar of the Temple Gate Hotel (Photograph: Patrick Comerford, 2019)

Most of Saint Xavier’s convent was demolished in 1995. The porch of the convent has been incorporated into the entrance lobby and bar of the Temple Gate Hotel. A separate block of the school is now a residential property.

A remaining wing houses the Ennis Tourist Information Bureau and the Clare Museum. The museum tells the history of Co Clare over a period of 6,000 years, using artefacts, text panels and audio-visual presentations.

The exhibition, the Riches of Clare, is spread across two galleries. The exhibition is divided into the themes of Earth, Power, Faith, Water and Energy and includes a large collection of objects on loan from the National Museum of Ireland. 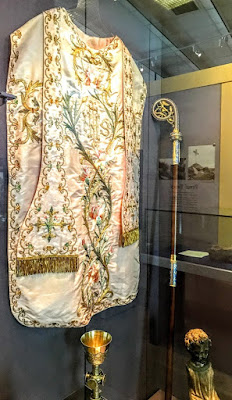 A chalice and vestments donated to the Sisters of Mercy are now among exhibits in the museum (Photograph: Patrick Comerford, 2019)

Two exhibits connect the Museum in an interesting way with the Sisters of Mercy who once had their convent on this site.

Hand-made rose vestments, made of Chinese silk, were hand-embroidered by Chinese women and presented by the Columban Sisters in the 1930s to Michael Fogarty (1859-1955), Bishop of Killaloe (1904-1955). Bishop Fogarty later donated them to the Sisters of Mercy in Ennis.

A silver gilt chalice, inset with semi-precious stones, was willed to the Sisters of Mercy by Bishop Fogerty’s brother, Father Daniel Fogarty, Parish Priest of Toomevara, Co Tipperary, when he died in 1903.

The Museum’s former role as a convent is also alluded to in the sculpture in oak and limestone, ‘Celtic Rest’ (2004) by Mary McNamara. 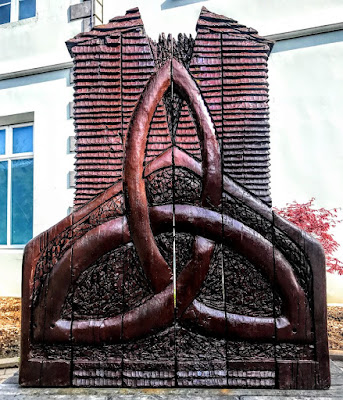 The convent and school were designed by the Ennis architect Maurice Fitzgerald
Posted by Patrick Comerford at 18:30