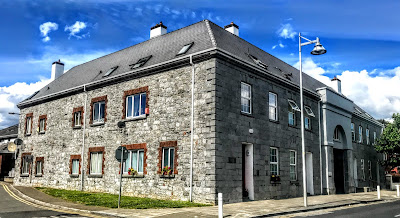 Castle Court, a housing development on Clancy’s Strand, Limerick, has been a ‘house of industry,’ a barracks, and council stores (Photograph: Patrick Comerford, 2019)

Clancy’s Strand on the west bank or Co Clare side of the River Shannon in Limerick, has a number of interesting buildings, including Saint Munchin’s Roman Catholic Church, Castle Court or the former Strand Barracks, and some elegant Victorian and Edwardian terraces of houses.

Today, Castle Court is a modern development of apartments and houses dating from 1990s. But it was first built not as a barracks or as housing but as a ‘house of industry’ in 1774, and it has interesting connections with Saint Mary’s Cathedral.

Legislation was passed in 1772 to establish houses of industry in all counties in Ireland. These would become known as the poorhouses or the workhouses, and Limerick’s ‘house of industry’ was built two years later, in 1774.

The house was designed by the Revd Deane Hoare (1724-1800), an amateur architect. Deane Hoare was born in Cork in 1724, a son of Robert Hoare of Cork and his wife Jane (née Newenham). He began studying at Trinity College Dublin in 1740, and after ordination became a curate at Saint Mary’s Cathedral, Limerick, and Rector of Killeely in the north liberties of the city.

In Killeely, Hoare ‘designed and built a handsome house on the glebe grounds for the Incumbents’ of the parish in 1768. Hoare is also said to have designed the Assembly Rooms in Limerick in 1769.

He was described as a ‘gentleman of great benevolence and philanthropy, under whose superintendence the cathedral of Limerick was much improved and beautified in 1752.’

Deane Hoare married Susan Ingram and their two sons were also priests in the Church of Ireland. He died in Limerick in 1800.

Hoare’s ‘House of Industry’ on North Strand was effectively a workhouse, a poorhouse and a prison. Although it was designed with a capacity for 200 people, by 1827, just half a century after it opened, the number of residents or prisoners accommodated there had risen to 450.

Following the Irish Poor Relief Act of 1838, A new workhouse that would later become Saint Camillus Hospital was built in 1841, and Hoare’s ‘House of Industry’ had outlived its use.

The premises were bought in 1841 by William Burgess and Sons, who set up a foundry there. Two decades later, the Limerick Grand Jury bought the place for £1,200 and converted it into the Strand Barracks for the Limerick County Militia. The colonel of the regiment from 1864 to 1894 was William Monsell (1812-1894), Liberal MP for Limerick (1847-1874), a cabinet minister as Paymaster General and Postmaster General, and later Lord Emly.

The militia continued to use Strand Barracks until 1918, when it was handed over to regular army regiments. The last British regiments to leave the barracks were the Oxfordshire and Buckinghamshire Light Infantry 1st Battalion and the Royal Army Service Corps, consisting of No. 1166 Motor Transport Company and Divisional Supply Column.

After the War of Independence and the Anglo-Irish Treaty, the Strand Barracks was handed over to troops of the Irish Free State on 1 March 1922.

The barracks was besieged by Free State troops under Commandant General Michael Brennan on 15-20 July 1922. Late in the late evening on 20 July, Captain McNamara surrendered the Strand Barracks to the Free State forces.

The Strand Barracks was then used as a training depot, and troops there were used in the Cork and Kerry landings in August 1922. The barracks was used by the Free State Army through the remainder of the Irish Civil War and later was home to units of the Southern Command of the Irish Defence Forces.

When the new hydroelectric power station was being built on the River Shannon at Ardnacrusha, the premises were used by a German firm of contractors, Siemens Bauunion, in 1925-1930. Later, the Strand Barracks was handed over to Limerick Corporation in 1935, and became a works yard, store and offices.

Limerick Corporation sold off the former barracks around in 1990, and it was developed around 1995 as the Castle Court complex of two-storey houses and apartments.

The building is a detached, U-plan nine-bay two-storey limestone former workhouse, with a central entrance breakfront with a carriage arch.

The architectural features include a hipped artificial slate roof, multiple skylights, rendered chimneystacks, a limestone ashlar façade with rusticated quoining, a cyma recta profiled limestone ashlar eaves course, camber-headed window openings, each having limestone voussoirs, keystone, and sills, brick formed window openings at the courtyard elevation, and a relieving arch with a keystone over the window at the third and seventh bays. The camber-headed door openings have limestone voussoirs, a keystone and threshold steps.

This remains a substantial stone building enclosing a courtyard accessed through a central carriage arch, forming a symmetrical-designed sombre classical composition. It is of great social and historical significance and it adds to the streetscape along the banks of the River Shannon, facing Saint Mary’s Cathedral and King John’s Castle. 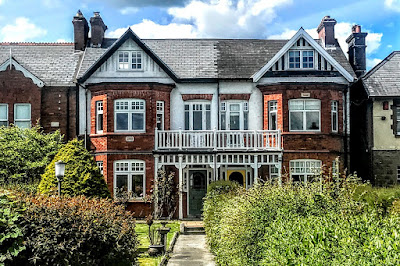